The Happy Family is a 1936 British comedy film directed by Maclean Rogers and starring Hugh Williams, Leonora Corbett and Max Adrian. [1] The film was based on the play French Salad by Max Catto.

The plot concerns a mother and father who, in order to shock their extended family out of their idle, spendthrift ways, pretend to have lost all their money. 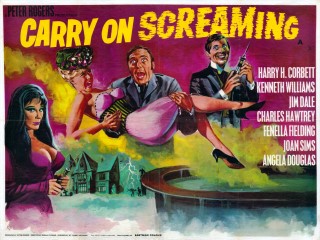 Carry On Screaming! is a 1966 British black comedy horror film, the twelfth in the series of 31 Carry On films (1958–1992). It was the last of the series to be made by Anglo-Amalgamated before the series moved to The Rank Organisation. Of the regular cast, it features Kenneth Williams, Jim Dale, Charles Hawtrey, Joan Sims, Bernard Bresslaw and Peter Butterworth. It also features Harry H. Corbett in his only series appearance and Fenella Fielding making her second and final appearance. Angela Douglas makes the second of her four Carry On appearances. Carry On Screaming is a parody of the Hammer horror films, which were also popular at the time.

Heart's Desire is a 1935 British musical drama film directed by Paul L. Stein and starring Richard Tauber, Leonora Corbett, Kathleen Kelly, Diana Napier and Frank Vosper. Its plot involves a young opera singer who is discovered in Vienna and brought to London where he rises to stardom. The film was made at Elstree Studios in April/May 1935, and had its charity premiere at the Regal Cinema, Marble Arch, London on 17 October that year. It was part of a cycle of British operetta films.

The Bargee is a 1964 British comedy film shot in Techniscope directed by Duncan Wood, and starring Harry H. Corbett, Hugh Griffith, Eric Sykes and Ronnie Barker. The screenplay was written by Ray Galton and Alan Simpson. 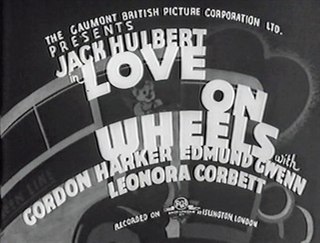 Talk About Jacqueline is a 1942 British comedy film directed by Harold French and Paul L. Stein and starring Hugh Williams, Carla Lehmann and Roland Culver. A woman tries to conceal her questionable past from her new husband. It was based on a 1926 novel by Katrin Holland which had previously been made into a 1937 German film Talking About Jacqueline.

Fingers is a 1941 British drama film directed by Herbert Mason, produced by A.M.Salomon for Warner Bros and starring Clifford Evans, Leonora Corbett and Esmond Knight. Its plot involves a London jeweller and fence for stolen goods who falls in love and tries to reform.

Warn London is a 1934 British thriller film directed by T. Hayes Hunter and starring Edmund Gwenn, John Loder and Leonora Corbett. It was based on a novel by Denison Clift.

Night Alone is a 1938 British comedy film directed by Thomas Bentley and starring Emlyn Williams, Leonora Corbett and Lesley Brook. It was based on a play by Jeffrey Dell.

Sanditon is a British historical drama television series adapted by Andrew Davies from an unfinished manuscript by Jane Austen and starring Rose Williams, Theo James, and Ben Lloyd-Hughes. Set during the Regency era, the plot follows a young and naive heroine as she navigates the new seaside resort of Sanditon.