Somewhere in Civvies is a 1943 British comedy film directed by Maclean Rogers and starring Frank Randle, George Doonan and Suzette Tarri. [1] Private Randle is discharged from the army and finds it difficult to adjust to civilian life. It was followed in 1949 by Somewhere in Politics . [2]

Ex-army private Randle stands to receive a substantial inheritance from his uncle if he can prove he is of sound mind. However, his devious cousin tries to grab the money by having Randle committed to a psychiatric home.

William Thomson Hay was an English comedian and astronomer who came to notice for his theatrical sketch as a jocular schoolmaster, known as Dr. Muffin. The acts in which Hay performed the schoolmaster sketch became known as "The Fourth Form at St. Michael's". Hay toured with the act and appeared in the United States, Canada, Australia and South Africa. He famously performed the schoolmaster routine at the 1925 Royal Command Performance before King George V and Queen Mary. From 1934 to 1943, he was a prolific film star in Britain and was ranked the third highest grossing star at the British Box Office in 1938, behind George Formby and Gracie Fields. He is widely regarded as one of the most prolific and influential British comedians of all-time.

James Robinson Clitheroe, popularly known as Jimmy Clitheroe, was an English comic entertainer. He is best remembered for his long running BBC Radio programme, The Clitheroe Kid (1956–72), two versions of which were produced for television on the ITV network: That's My Boy!, and Just Jimmy.

Frank Randle was an English comedian. A contemporary of fellow Lancastrians George Formby and Gracie Fields, he was regarded as more subversive, perhaps explaining why the immense popularity he enjoyed during his lifetime has not survived him.

John E. Blakeley was a British film producer, director and screenwriter, the founder of Mancunian Films.

The Devil at 4 O'Clock is a 1961 American adventure film directed by Mervyn LeRoy and starring Spencer Tracy and Frank Sinatra. Based on a 1959 novel with the same title by British writer Max Catto, the film was a precursor to Krakatoa, East of Java and the disaster films of the 1970s, such as The Poseidon Adventure, Earthquake and The Towering Inferno.

Ted Lune was a British actor, best known for portraying Private Len Bone in the TV series The Army Game. He also worked in radio comedy and appeared in a couple of films.

It's a Grand Life is a 1953 British comedy film starring Frank Randle and Diana Dors. Music hall comedian Frank Randle who had previously starred in a film series of World War II army comedies stars as an accident-prone Private in his final film appearance. The film also features the professional wrestler Jack Pye and the popular pianist Winifred Atwell. The role of Pte Pendergast was played by Arthur White, who is the elder brother of the actor Sir David Jason.

Somewhere in England is a 1940 British comedy film directed by John E. Blakeley and starring Frank Randle, Harry Korris and Winki Turner. It follows the adventures of an anti-authoritarian private stationed in a military camp in the North of England during the Second World War. It was the first in the Somewhere film series, followed by its sequel Somewhere in Camp in 1942. 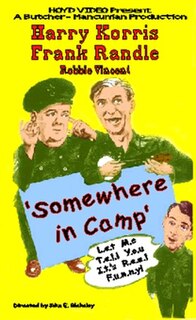 Somewhere in Camp is a 1942 British comedy film directed by John E. Blakeley and starring Frank Randle, Harry Korris and Robbie Vincent. The film continues the adventures of Private Randle from the 1940 film Somewhere in England. It was followed in 1943 by Somewhere on Leave.

Somewhere on Leave is a 1943 British comedy film directed by John E. Blakeley and starring Frank Randle, Harry Korris and Dan Young. It was the third in the series of Somewhere films following Private Randle and his comrades. It was followed by Somewhere in Civvies.

Somewhere in Politics is a 1949 British comedy film directed by John E. Blakeley and starring Frank Randle, Tessie O'Shea and Josef Locke. It was the fifth film in the Somewhere series of films featuring Randle followed by It's a Grand Life (1953).

Daniel Daly "Dan" Young was a British comedian and film actor. He featured in a number of Mancunian Films productions often appearing with Frank Randle. 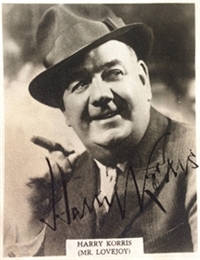 Harry Korris (1891–1971) was a British comedian and actor. He was a star of the hit BBC radio show Happidrome and starred in the 1943 film version. He also appeared in several Frank Randle films.

Civvies is a six-part thriller first broadcast on BBC1 on 22 September 1992. The series was written by Lynda La Plante - her first writing contribution for the BBC, after being snatched in a "golden handcuffs" deal following the success of Prime Suspect. The series focuses on Frank Dillon, a former Army soldier who finds life outside the army tougher than being in it - and slowly falls under the power of east end gangster Barry Newman, who is looking to hire a trained hitman. The complete series was released on DVD on 3 June 2013 on Acorn Media UK.

Ada Barbara Harriett Tarry, better known by her stage name Suzette Tarri was a popular Cockney stage and radio comedian of the 1930s and 1940s. She worked with Harry Hemsley in recordings in the late thirties, often in the role of a cockney charwoman. Tarri became well known on the BBC's ITMA radio shows during World War II. Her signature song was "Red Sails in the Sunset". She was a president of the Concert Artistes Association. She also appeared in the film Somewhere in Civvies (1943).