Last updated May 25, 2021
Swedish military support operation during the COVID-19 outbreak in Sweden

Operation Gloria was a Swedish military operation conducted in support of handling the COVID-19 pandemic in Sweden.

Sweden's first case of COVID-19 was discovered in January 2020. The 11th of March, the Swedish Public Health Agency (Folkhälsomyndigheten) asked the Swedish Armed Forces for support in handling the outbreak. [2]

The Swedish Armed Forces was first tasked with supporting the civilian society in case of peace time emergencies in 1995 by the then current Swedish government. The task was abolished in 2004, but was later added again in 2009. [5]

The Swedish Armed Forces set up two field hospitals; one in the capital city of Stockholm, and one in Gothenburg, on the west coast. Originally, the armed forces was preparing to set up a field hospital at Ärna Air Base in Uppsala, north of Stockholm. The resources were instead rerouted to Älvsjö mess hall, in southern Stockholm. The hospital was prepared to admit 550 ICU patients, but was demobilised in June 2020, without taking in one single patient. This was due to the hospital in the Stockholm area had contigency preparedness and was able to handle the situation by themselves. [6]

The Swedish Prince Carl Philip, Duke of Värmland, asked, and served in the the Swedish Armed Forces high command to support the operational staff leading the support operation. He served with the rank of Major at the time. [7]

The largest part of Operation Gloria was military personell helping out with gathering and deliveries of contact tracing tests. Military personell, mainly from the Home Guard (Hemvärnet) - but also conscripts and professional soldiers - delivered and gathered indicual self tests from sick indivudals and delviered these to test labs for control, contact tracing, and anti-bodies. [8] [3]

The Swedish Armed Forces were asked to relieve the civilian medical organisations by vaccinating their own personell, mainly in the regions of Blekinge, Halland, and Västra Götaland County. [9]

After some debate, Swedish military personell taking part in international military missions - such as MINUSMA - were allowed to be vaccinated ahead of time. [10]

The National CBRN Defence Centre (Totalförsvarets skyddscentrum, SkyddsC) in Umeå conducted an exercise together with Uppsala University Hospital (Akademiska sjukhuset) and the Public Health Agency to maintain readiness and Freedom of Action to sampling and analyzing possible contagion. The exercise showed a postive outcome. This resources was however never activated. [11]

The Swedish Armed Forces is the government agency that forms the military forces of Sweden, tasked with the defense of the country as well as with promoting Sweden's wider interests, supporting international peacekeeping, and providing humanitarian aid. It consists of the Swedish Army, the Swedish Air Force and the Swedish Navy, as well as a military reserve force, the Home Guard. Since 1994, all Swedish military branches are organized within a single unified government agency, headed by the Supreme Commander, even though the individual services maintain their distinct identities.

Särskilda Operationsgruppen is a special operations unit within the Swedish Armed Forces which has been active since 2011. The unit is headquartered at Karlsborg Fortress in Karlsborg, Västra Götaland County.

The Chief of Army is the most senior appointment in the Swedish Army. The position Chief of Army was introduced in 1937 and the current form in 2014. 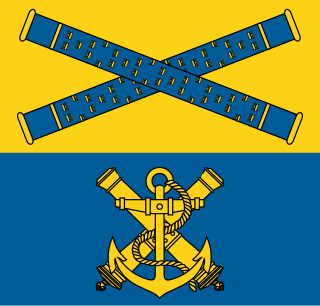 Chief of Navy is the most senior appointment in the Swedish Navy. The position Chief of Navy was introduced in 1936 and the current form in 2014. 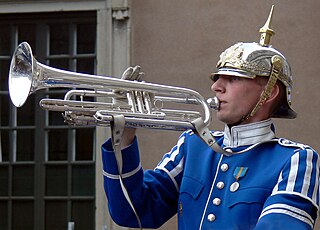 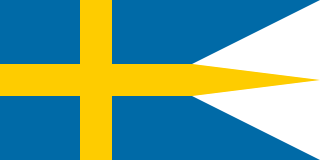 The COVID-19 pandemic in Sweden is part of the pandemic of coronavirus disease 2019 caused by severe acute respiratory syndrome coronavirus 2. The virus was confirmed to have reached Sweden on 31 January 2020, when a woman returning from Wuhan tested positive. On 26 February, following outbreaks in Italy and in Iran, multiple travel-related clusters appeared in Sweden. Community transmission was confirmed on 9 March in the Stockholm Metropolitan Area. Since then, individuals in every län (county) have tested positive for COVID-19. The first death was reported on 11 March in Stockholm, a case of community transmission. However, it is believed that the virus could have reached Sweden as early as December 2019, when several individuals sought care for respiratory illness in Falun after contact with an individual with recent travel history to Wuhan.

The following is a timeline of minor events between January and mid-March in the COVID-19 pandemic in Sweden.

Sweden's unique response to the COVID-19 pandemic has been the subject of significant controversy in both domestic and international circles. Unlike most countries, which strongly recommended widespread sector closures, quarantining, and lockdown measures to curb the spread of the coronavirus disease 2019, the government of Sweden took a more lenient approach to the pandemic, prioritizing the economy and only pursuing social distancing measures such as bans on large gatherings and travel restrictions. This approach has been a divisive topic of debate, receiving significant criticism both domestically and internationally, and with those who oppose social distancing often citing the Swedish response as an example. 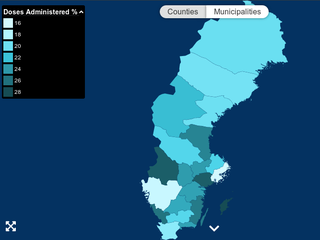 Vaccination against COVID-19 in Sweden started on 27 December 2020 after the approval of the Pfizer–BioNTech vaccine by the European Commission. In Sweden, the Public Health Agency has been commissioned by the government to create a vaccination plan. Sveriges riksbank, the central bank of Sweden, predicts that efficient vaccination against COVID-19 has macroeconomic benefits. As of 21 May 2021, 42.0% of adults in Sweden have received at least one dose, with a total of 4,543,467 doses administered.