Women's basketball (as a zoned, single-dribble game) at the University of Oregon started as a club in 1899, brought to Oregon by physical education instructor Alice Chapman, wife of University President Charles Chapman. With a women's intercollegiate game emerging at Willamette University, Oregon Agricultural College, Pacific University, and elsewhere, an effort was made during the 1902-03 academic year to organize a women's university team. [2] This effort was waylaid by the Oregon faculty athletic committee early in January 1903, however, with the committee deeming it "not advisable" for the "young ladies' basketball team" to enter into intercollegiate games. [3] Instead, it was hoped that two campus teams could be organized to keep competition on a local level. [3]

The sport became an "interest group" in 1965. Intercollegiate games also began in 1965, and in 1966, the women's team entered the Northwest College Women's Sports Association (which would eventually become the AIAW Region 9 conference). The program became official in 1973, the year following the passage of Title IX, which required federally supported universities to offer equal opportunities in men's and women's athletics. [4] They have an all-time record (as of the end of the 2015–16 season) of 706–507. They previously played in the Northwest Basketball League from 1977–1982 (47–5 all-time record) and the NorPac Conference from 1982–1986 (34–12 all-time record) before the Pacific-10 Conference, now known as the Pac-12 Conference, began sponsoring women's sports in 1986. The Ducks' current all-time conference record is 260–280. They won the Women's National Invitation Tournament in 2002 54–52 over Houston. [5]

The Ducks have appeared in 17 NCAA Tournaments. Their combined record is 17–16.

Jane Spearing coached the first official season for the Ducks in 1973–74. The team finished that season with a 3–8 losing record. The 1974–75 and 1975–76 seasons were coached by Nancy Mikleton and the team posted 2–10 and 5–15 records, respectively. Head coach Elwin Heiny took over the program in 1976 and remained coach until 1993. Heiny was the first full-time coach hired for women's basketball. In his first season as head coach, Heiny coached the team to its first winning record (11–6). Jody Runge took over as head coach in 1993 and coached until 2001. She coached the Ducks to NCAA tournament appearances during each of her eight seasons as coach. Runge also spoke out for equality in women's athletics. [6] From 2001–2009, former Oregon Ducks All-American Bev Smith coached the team, posting an 83–69 overall record. Paul Westhead coached the Ducks from the 2009–10 season through the 2013–14 season. The current head coach is Kelly Graves, assisted by Associate Head Coach Mark Campbell, and Assistant Coaches Jodie Berry and Xavi López.

The early women's basketball clubs played in Gerlinger Hall on the University of Oregon campus, built in 1927 to serve as the women's gymnasium. Games eventually moved to McArthur Court (also called Mac Court and "The Pit") — one of the most renowned college athletic facilities of all time. Admission was first charged for women's games at Mac Court in 1978. The Ducks relocated when Matthew Knight Arena opened in 2011. In their first game in Matthew Knight, the women's team defeated Oregon State University in the "Civil War," 81–72.

The Oregon State Beavers are the athletic teams that represent Oregon State University, located in Corvallis, Oregon. The Beavers compete at the National Collegiate Athletic Association (NCAA) Division I level as a member of the Pac-12 Conference. Oregon State's mascot is Benny the Beaver. Both the men's and women's teams share the name, competing in 7 NCAA Division I men's sports and 9 NCAA Division I women's sports respectively. The official colors for the athletics department are Beaver Orange, black, and white.

The Oregon Ducks football program is a college football team for the University of Oregon, located in the U.S. state of Oregon. The team competes at the NCAA Division I level in the FBS and is a member of the Pac-12 Conference (Pac-12). Although now known as the Ducks, the team was commonly called the Webfoots until the mid-1960s. The program first fielded a football team in 1894. Oregon plays its home games at the 54,000 seat Autzen Stadium in Eugene. Its main rivals are the Oregon State Beavers and the Washington Huskies. The Ducks and Beavers historically end each regular season with their rivalry game in late November. The program has been one of the most successful programs since the 2010’s. Oregon football has been known in recent years for its unique uniform style.

Jim Haney was the head basketball coach at the University of Oregon in Eugene for five seasons, from 1978 to 1983.

Beverly "Bev" Smith is a Canadian basketball player and coach.

The Oregon Ducks men's basketball team is an intercollegiate basketball program that competes in the NCAA Division I and is a member of the Pac-12 Conference, representing the University of Oregon. The Ducks play their home games at Matthew Knight Arena, which has a capacity of 12,364. Then coached by Howard Hobson, Oregon won the first NCAA men's basketball national championship in 1939. They again reached the Final Four in 2017 under head coach Dana Altman, marking the longest span between appearances in NCAA history. The Ducks have made the NCAA tournament 17 times, and have won eight conference championships.

Kelly Lee Graves is the current head women's basketball coach at the University of Oregon. Previously, Graves was the head women's basketball coach at St. Mary's from 1997 to 2000, as well as Gonzaga University from 2000 to 2014. He was formerly an assistant coach for the Portland Pilots (1994–1997) and St. Mary Gaels, where he later got his first head coaching stint with the Gaels from 1997 to 2000. From the 2004–2005 season to the 2013–2014 season, he guided Gonzaga to ten consecutive West Coast Conference regular season titles. The 2007 team went 13–1 in conference play, and later won the WCC conference tournament. The school also received its first ever NCAA tournament appearance. He was named WCC co-coach of the year for his accomplishments. In 2005, 2010, and 2011, Gonzaga went undefeated in WCC regular season play.

The Oregon Ducks baseball team represents the University of Oregon in NCAA Division I college baseball in the Pac-12 Conference. The home games are played on campus at PK Park.

The 2014–15 Oregon Ducks men's basketball team represented the University of Oregon during the 2014–15 NCAA Division I men's basketball season. The Ducks were led by their fifth year head coach Dana Altman. They played their home games at Matthew Knight Arena and were members of the Pac-12 Conference. They finished the season 26–10, 13–5 in Pac-12 play to finish in a tie for second place. They advanced to the championship game of the Pac-12 Tournament where they lost to Arizona. They received an at-large bid to the NCAA Tournament where they defeated Oklahoma State in the second round before losing in the third round to Wisconsin.

Jillian Alleyne is an American professional basketball player who is currently a free agent in the Women's National Basketball Association (WNBA). She played college basketball for University of Oregon.

The 1978–79 Oregon Ducks women's basketball team represented the sixth official season for the University of Oregon's Varsity women's basketball program. The Ducks were coached by Elwin Heiny in his third year as head coach. The team finished the regular season undefeated and posted a 68–67 win over the internationally ranked No. 5 Republic of North Korea National team in a late-season exhibition game. Their final record was 23-2 with losses to Oregon State in the AIAW Region 9 championship tournament and South Carolina. The team led the league in points per game (84.6), boosted by the largest margin of victory in program history: a 121–40 win over the University of Hawaii.

Tyler Quincy Dorsey is a Greek-American professional basketball player for Olympiacos of the Greek Basket League and the EuroLeague. At a height of 1.96 m (6'5") tall, he plays at the shooting guard position. After graduating from Maranatha High School, in Pasadena, California, he played college basketball for the Oregon Ducks. While at Oregon, he was nicknamed "Mr. March" for his clutch play during the NCAA tournament. He is also a member of the senior Greek national team. 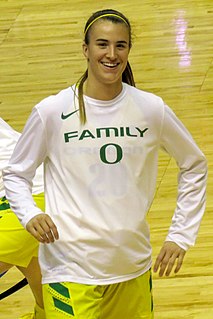 Ruth Cecilia Hebard is an American professional basketball player for the Chicago Sky of the Women's National Basketball Association (WNBA). She played college basketball for the Oregon Ducks. While at West Valley High School in Fairbanks, Alaska, Hebard was a three-time Gatorade State Player of the Year from 2013 to 2015, and two-time USA Today Alaska Player of the Year in 2015 and 2016. 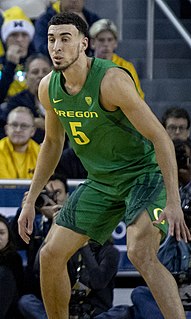 Christopher Theoret Duarte is a Dominican professional basketball player for the Indiana Pacers of the National Basketball Association (NBA). He played college basketball for the Northwest Florida State Raiders and the Oregon Ducks. At Northwest Florida State, he was named NABC NJCAA Player of the Year in 2019. At Oregon, he received the 2021 Jerry West Award as the nation's top collegiate shooting guard.

The 2021–22 Oregon Ducks women's basketball team represented the University of Oregon during the 2021–22 NCAA Division I women's basketball season. The Ducks were led by eighth-year head coach Kelly Graves, and they played their home games at Matthew Knight Arena as members of the Pac-12 Conference.