Paper Mill Playhouse is a regional theater with approximately 1200 seats, located in Millburn, New Jersey. Due to its relatively close location to Manhattan, it draws from the pool of actors (and audience members) who live in New York City. Paper Mill was officially designated as the "State Theater of New Jersey". [2] From 1971 to 2008, Paper Mill held the New Jersey Ballet as its resident ballet company, with the annual production of Nutcracker until the premiere 25th Anniversary tour of Les Misérables took up the ballet's performance slot. [3] Mark S. Hoebee serves as the artistic director and Todd Schmidt serves as the managing director. In 2016, the playhouse received the Regional Theatre Tony Award. [4]

In March 1795, Sam Campbell built The Thistle Paper Mill [5] on land along a brook in the town of Millville, later renamed Millburn. Campbell ran his business for about 20 years until he was forced to close down due to a fire. The building remained vacant for several years and ownership changed several times. In the late 1870s, Diamond Mill Paper Company took over the property and used it for their paper making business until 1928. [6]

Writer and performer Antoinette Scudder, along with actor and director Frank Carrington formed a partnership in the late 1920s to create their own theater. [7] The eventually found the vacant mill, and spent many years working on it, turning it into a theater. [8]

Another fire in 1980 changed the course of the theater, and it closed for rebuilding. [9] On October 30, 1982, the Paper Mill reopened for their first theatrical production since the fire. [10] This period of time became the focal point of a lawsuit between the theater and Millburn on whether or not they would be exempt from property taxes during the time the property was not in use. [11]

Founded in 1934, Paper Mill Playhouse raised the curtain on its first performance [1] with Gregorio Martinez Sierra’s The Kingdom of God on November 14, 1938. By the end of the first year, Carrington had coaxed entertainer Irene Castle out of retirement to make her dramatic debut in Noël Coward’s Shadow Play. The first few years featured a variety of classical and modern plays. By 1941, the Playhouse had begun to specialize in operettas, which it continued until the early 1950s.

In 1972, Governor of New Jersey William Cahill proclaimed Paper Mill the "Official State Theater of New Jersey." [1] The theater has been cited as a State Center of Artistic Excellence and as a Major Impact and Distinguished Arts Organization by the New Jersey State Council on the Arts. [1]

In April 2003, Michael Gennaro, former executive director of Chicago's Steppenwolf Theater, joined Paper Mill as president and CEO. [15] Paper Mill Playhouse was one of the first theaters to begin the regional theater movement in the United States. It has grown to be one of the most acclaimed not-for-profit professional theaters in the country, and attracts more than 450,000 people annually, and has one of the largest subscription based audiences. [1]

Paper Mill announced that it would have to do more well-known shows to stay in business. [18] On June 17, 2008, the Township of Millburn voted to purchase building and four acres of land the Paper Mill sits on for $9 million. [19] They have entered into a 75-year lease with the theater; and its operations will remain independent. [20] Prior to this deal the Paper Mill had accumulated $4.5 million in debt. [21] Based on the terms of the lease, the Paper Mill would pay $1 for the first two years. After 2 years the rent would grow to equal 1% of the theater's annual operation income. [22] The Paper Mill maintained an option to repurchase the property from the town after 11 years of the lease. [23] The artistic director at the time, Mark S. Hoebee, is attributed with saving the Paper Mill.

Paper Mill is a member of the Council of Stock Theatres (COST), a group of theaters who join together to negotiate with the various unions that are involved in stage productions. COST's contract with Actors' Equity allows for a minimum weekly salary which is smaller than what Broadway productions must pay their actors; Paper Mill is also allowed to cast a minimal amount of non-union actors, which is forbidden for Broadway shows. This gives Paper Mill the ability to produce shows on a larger scale than most Broadway productions (and in a shorter amount of time). [40]

Paper Mill also has a large theater school offering a variety of classes. [41] [42] They have also run classes for developmentally disabled students with VSA New Jersey. [43]

The 2016 Rising Star Awards were held on June 7, 2016, in the Paper Mill Playhouse theater. The awards show was broadcast and streamed live on HomeTowne Television. The 2016 recipients include:

The 2015 Rising Star Awards were held on June 2, 2015, in the Paper Mill Playhouse theater. The awards show was broadcast & live streamed live on HomeTowne Television. The 2015 recipients include:

The 2013 Rising Star Awards were held on June 4, 2013, in the Paper Mill Playhouse theatre and included special appearances by people such as Jesse Eisenberg and Morgan Kirner (recipient of the 2012 Outstanding Actress in a Leading Role Rising Star Award).

Union High School is a comprehensive community public high school located in Union Township in Union County, New Jersey, United States, serving students in ninth through twelfth grades as the lone secondary school of the Union Public School District. In the late 1960s, a new high school was built, expanding on the existing Burnet Junior High School structure. Subsequent to completion of the new Union High School, the former high school building became Burnet Junior High and later, Burnet Middle School. The school has been accredited by the Middle States Association of Colleges and Schools Commission on Secondary Schools since 1953.

Gavin Lee is an English actor who has appeared on the stage in musical theatre, notably as Bert in the musical Mary Poppins, in both the West End and on Broadway, and as Squidward Tentacles in the original Broadway cast of Spongebob Squarepants: The Musical.

John Dossett is an American actor and singer.

Saint Joseph Regional High School is a private, Roman Catholic, college preparatory school for boys, located on a 33-acre (130,000 m2) campus in Montvale, in Bergen County, New Jersey, United States. The school operates under the auspices of the Roman Catholic Archdiocese of Newark. St. Joseph Regional High School was founded in 1962 by the Brothers of Saint Francis Xavier. The school has been accredited by the Middle States Association of Colleges and Schools Commission on Secondary Schools since 1968.

Rahway High School is a four-year public high school that serves students in ninth through twelfth grades from Rahway, in Union County, New Jersey, United States, operating as the lone secondary school of the Rahway Public Schools. The high school's present location was built in 1941. The school has been accredited by the Middle States Association of Colleges and Schools Commission on Secondary Schools since 1931.

Andy Karl is an American actor and singer, best known for performing in musical theatre. He has appeared on Broadway in the original productions of Groundhog Day, Legally Blonde, 9 to 5, and Rocky the Musical, as well as appearing in Wicked, The Mystery of Edwin Drood, Jersey Boys, On The Twentieth Century and And So It Goes.

Rick Elice is a writer and former stage actor.

The New Jersey Ballet is a ballet company based in Livingston, New Jersey in the United States, founded in 1958 by native New Jerseyan Carolyn Clark and her fellow dancer, George Tomal.

Christine Danelson is an American actress best known as the understudy for the role of Tracy in the national tour of the Broadway musical Hairspray. Danelson performed as Tracy nearly 60 times during the tour, and was critically well-regarded, with one Reno reviewer commenting, "As Tracy, Danelson is the show's centerpiece and she's terrific."

Jennifer Cody is an American dancer and actress.

Gregory Lucas Malek-Jones known professionally as Gregori Lukas is an American recording artist, singer, dancer and actor. Gregori released his debut single "Stay", in March 2013, to rave reviews. He has appeared with the New York City Ballet in numerous productions and is best known for playing the title role in George Balanchine's Nutcracker at the New York State Theater in Lincoln Center. 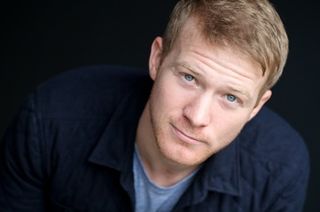 Jeff Kready is an American stage performer and has been featured in Broadway musicals.

Rob McClure is an American actor. He is best known for his roles in musical theatre. He won a Theatre World Award and was nominated for the 2013 Tony Award for Best Actor in a Musical for his performance in the title role of the musical Chaplin. In 2019, on Broadway, he originated the role of Adam Maitland in Beetlejuice, the Musical, his seventh Broadway production.

Rachel Moss is an actor who has starred on Off Broadway plays and TV shows. She has also appeared in commercials for Pepsi and Playhouse Disney. 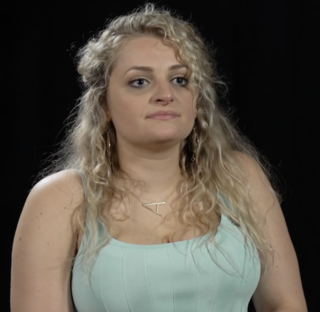 Ali Stroker is an American actress and singer. She is the first actress who uses a wheelchair for mobility to appear on a Broadway stage, and to be nominated for and win a Tony Award. Stroker was a finalist on the second season of The Glee Project, and later appeared as a guest star on Glee in 2013. She played the role of Anna in Deaf West's 2015 revival of Spring Awakening. She won the 2019 Tony Award for Best Featured Actress in a Musical for her performance in Oklahoma!

Michele Ragusa is an American actress and singer currently residing in New Jersey. She is best known for her work in Broadway Musicals and her solo performances and staged concerts with Symphony Orchestras around the United States. She also played a recurring role on the television comedy Happyish.