In mathematics, Pappus's hexagon theorem (attributed to Pappus of Alexandria) states that

If one restricts the projective plane such that the Pappus line

is the line at infinity, one gets the affine version of Pappus's theorem shown in the second diagram.

If the Pappus line

have a point in common, one gets the so-called little version of Pappus's theorem. [2]

, and another set of concurrent lines

defined by pairs of points resulting from pairs of intersections

are concurrent. (Concurrent means that the lines pass through one point.)

The Pappus configuration is the configuration of 9 lines and 9 points that occurs in Pappus's theorem, with each line meeting 3 of the points and each point meeting 3 lines. In general, the Pappus line does not pass through the point of intersection of

. [3] This configuration is self dual. Since, in particular, the lines

have the properties of the lines

of the dual theorem, and collinearity of

is equivalent to concurrence of

, the dual theorem is therefore just the same as the theorem itself. The Levi graph of the Pappus configuration is the Pappus graph, a bipartite distance-regular graph with 18 vertices and 27 edges.

If the affine form of the statement can be proven, then the projective form of Pappus's theorem is proven, as the extension of a pappian plane to a projective plane is unique.

Because of the parallelity in an affine plane one has to distinct two cases:

. The key for a simple proof is the possibility for introducing a "suitable" coordinate system:

. In this case coordinates are introduced, such that

From the parallelity of the lines

and the parallelity of the lines

and is parallel line

(little theorem). In this case the coordinates are chosen such that

. From the parallelity of

, respectively, and at least the parallelity

, so they pass through the same point

. The condition for the three lines

to pass through the same point

. So this last set of three lines is concurrent if all the other eight sets are because multiplication is commutative, so

The proof is invalid if

happen to be collinear. In that case an alternative proof can be provided, for example, using a different projective reference.

Because of the principle of duality for projective planes the dual theorem of Pappus is true:

are chosen alternately from two pencils with centers

are concurrent, that means: they have a point

in common. The left diagram shows the projective version, the right one an affine version, where the points

are points at infinity. If point

is on the line

than one gets the "dual little theorem" of Pappus' theorem.

If in the affine version of the dual "little theorem" point

is a point at infinity too, one gets Thomsen's theorem, a statement on 6 points on the sides of a triangle (see diagram). The Thomsen figure plays an essential role coordinatising an axiomatic defined projective plane. [6] The proof of the closure of Thomsen's figure is covered by the proof for the "little theorem", given above. But there exists a simple direct proof, too:

Because the statement of Thomsen's theorem (the closure of the figure) uses only the terms connect, intersect and parallel, the statement is affinely invariant, and one can introduce coordinates such that

(see right diagram). The starting point of the sequence of chords is

One easily verifies the coordinates of the points given in the diagram, which shows: the last point coincides with the first point.

Other statements of the theorem

In addition to the above characterizations of Pappus's theorem and its dual, the following are equivalent statements:

are lines, then Pappus's theorem states that

must be a line. Also, note that the same matrix formulation applies to the dual form of the theorem when

etc. are triples of concurrent lines. [8]

In its earliest known form, Pappus's Theorem is Propositions 138, 139, 141, and 143 of Book VII of Pappus's Collection. [10] These are Lemmas XII, XIII, XV, and XVII in the part of Book VII consisting of lemmas to the first of the three books of Euclid's Porisms.

The lemmas are proved in terms of what today is known as the cross ratio of four collinear points. Three earlier lemmas are used. The first of these, Lemma III, has the diagram below (which uses Pappus's lettering, with G for Γ, D for Δ, J for Θ, and L for Λ).

Here three concurrent straight lines, AB, AG, and AD, are crossed by two lines, JB and JE, which concur at J. Also KL is drawn parallel to AZ. Then

The last compound ratio (namely JD : GD & BG : JB) is what is known today as the cross ratio of the collinear points J, G, D, and B in that order; it is denoted today by (J, G; D, B). So we have shown that this is independent of the choice of the particular straight line JD that crosses the three straight lines that concur at A. In particular

It does not matter on which side of A the straight line JE falls. In particular, the situation may be as in the next diagram, which is the diagram for Lemma X.

Just as before, we have (J, G; D, B) = (J, Z; H, E). Pappus does not explicitly prove this; but Lemma X is a converse, namely that if these two cross ratios are the same, and the straight lines BE and DH cross at A, then the points G, A, and Z must be collinear.

What we showed originally can be written as (J, ∞; K, L) = (J, G; D, B), with ∞ taking the place of the (nonexistent) intersection of JK and AG. Pappus shows this, in effect, in Lemma XI, whose diagram, however, has different lettering: The diagram for Lemma XII is: 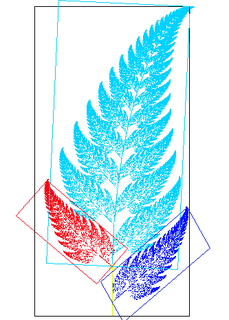 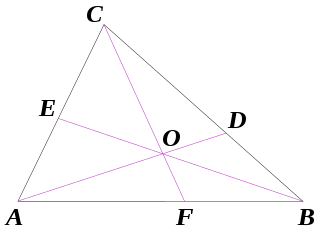 Ceva's theorem is a theorem about triangles in plane geometry. Given a triangle ABC, let the lines AO, BO and CO be drawn from the vertices to a common point O, to meet opposite sides at D, E and F respectively. Then, using signed lengths of segments, 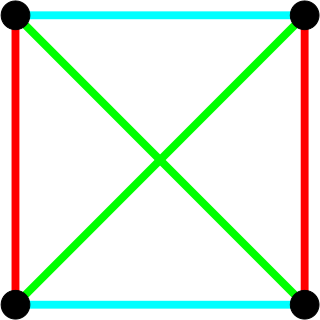 A finite geometry is any geometric system that has only a finite number of points. The familiar Euclidean geometry is not finite, because a Euclidean line contains infinitely many points. A geometry based on the graphics displayed on a computer screen, where the pixels are considered to be the points, would be a finite geometry. While there are many systems that could be called finite geometries, attention is mostly paid to the finite projective and affine spaces because of their regularity and simplicity. Other significant types of finite geometry are finite Möbius or inversive planes and Laguerre planes, which are examples of a general type called Benz planes, and their higher-dimensional analogs such as higher finite inversive geometries.

In mathematics, the upper half-plane, is the set of points (x, y) in the Cartesian plane with y > 0. 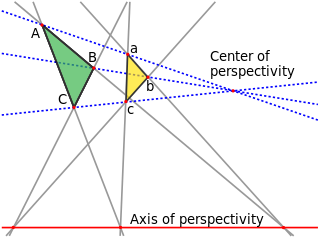 In geometry, a degenerate conic is a conic that fails to be an irreducible curve. This means that the defining equation is factorable over the complex numbers as the product of two linear polynomials. 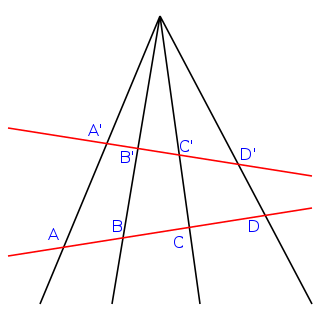 In geometry, the cross-ratio, also called the double ratio and anharmonic ratio, is a number associated with a list of four collinear points, particularly points on a projective line. Given four points A, B, C and D on a line, their cross ratio is defined as 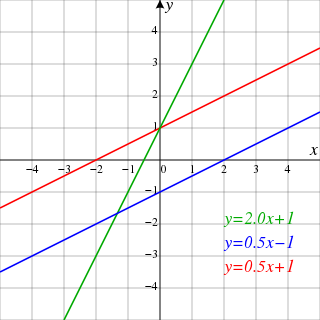 In mathematics, a Minkowski plane is one of the Benz planes.

In mathematics, a Möbius plane is one of the Benz planes: Möbius plane, Laguerre plane and Minkowski plane. The classical example is based on the geometry of lines and circles in the real affine plane.

In geometry, specifically projective geometry, a blocking set is a set of points in a projective plane that every line intersects and that does not contain an entire line. The concept can be generalized in several ways. Instead of talking about points and lines, one could deal with n-dimensional subspaces and m-dimensional subspaces, or even more generally, objects of type 1 and objects of type 2 when some concept of intersection makes sense for these objects. A second way to generalize would be to move into more abstract settings than projective geometry. One can define a blocking set of a hypergraph as a set that meets all edges of the hypergraph.

The Steiner conic or more precisely Steiner's generation of a conic, named after the Swiss mathematician Jakob Steiner, is an alternative method to define a non-degenerate projective conic section in a projective plane over a field.