Peanut production in Guyana plays an important role in some areas of the country. In the remote Rupununi region of Guyana, peanut farming dominates the local economy and farmers depend upon the crop as their main source of income. Recent agricultural developments have enhanced production from 1,100 pounds per acre to over 2,500 in four years. [1] As a result of increasing yields Guyanese farmers have not only benefited from local markets in Guyana but have increasingly seen the export of Guyanese peanuts in the Caribbean market. [2]

In 2005, a peanut butter factory was built by Amerindian women in the Aranaputa village of North Rupununi with the support of various agencies. The Aranaputa Processors Friendly Society produced snacks for the regional school district, but their success was hampered by competition from cheap peanut butter imported from China. [5] Lower domestic demand has the village seeking ways to enter the international market with their peanut butter. [6]

In Guyana, peanut exports have been notably affected by food safety concerns. [2] In the Rupununi region in particular, the local peanut crop needs to be tested for aflatoxins, a group of carcinogenic toxins that occur in the soil. Guyanese farmers are obliged to comply with the Guyanese Food and Drug Department (FDD) and cannot sell peanuts unless they are certified as free of all aflatoxins. [2] Current food safety testing and certification mechanisms cannot keep up with the increased demand for testing, leaving peanut harvests ineligible for export. USAID has been involved with the FDD in training specialists and technicians from the FDD, the University of Guyana, and private companies to improve peanut sampling testing in the country. [2]

George Washington Carver was an American agricultural scientist and inventor who promoted alternative crops to cotton and methods to prevent soil depletion. He was the most prominent black scientist of the early 20th century. 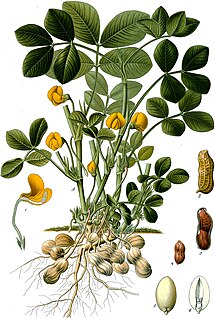 The peanut, also known as the groundnut, goober (US), pindar (US) or monkey nut (UK), and taxonomically classified as Arachis hypogaea, is a legume crop grown mainly for its edible seeds. It is widely grown in the tropics and subtropics, being important to both small and large commercial producers. It is classified as both a grain legume and, due to its high oil content, an oil crop. World annual production of shelled peanuts was 44 million tonnes in 2016, led by China with 38% of the world total. Atypically among legume crop plants, peanut pods develop underground (geocarpy) rather than above ground. With this characteristic in mind, the botanist Carl Linnaeus named the species hypogaea, which means "under the earth". 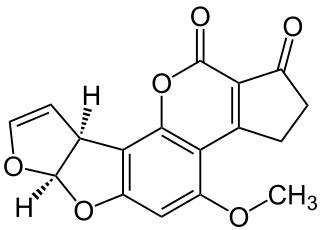 Aflatoxins are poisonous carcinogens and mutagens that are produced by certain molds which grow in soil, decaying vegetation, hay, and grains. They are regularly found in improperly stored staple commodities such as cassava, chili peppers, cottonseed, millet, peanuts, rice, sesame seeds, sorghum, sunflower seeds, sweetcorn, tree nuts, wheat, and a variety of spices. When contaminated food is processed, aflatoxins enter the general food supply where they have been found in both pet and human foods, as well as in feedstocks for agricultural animals. Animals fed contaminated food can pass aflatoxin transformation products into eggs, milk products, and meat. For example, contaminated poultry feed is suspected in the findings of high percentages of samples of aflatoxin-contaminated chicken meat and eggs in Pakistan. 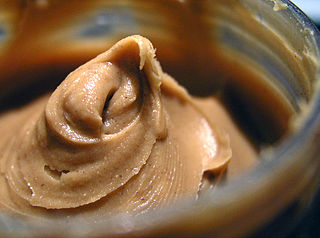 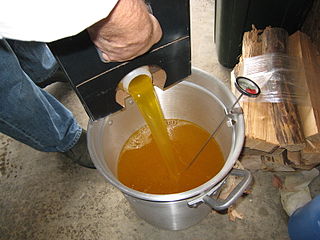 Peanut oil, also known as groundnut oil or arachis oil, is a vegetable oil derived from peanuts. The oil has a strong peanut flavor and aroma. It is often used in American, Chinese, South Asian, African and Southeast Asian cuisine, both for general cooking, and in the case of roasted oil, for added flavor.

Agriculture in Ghana consists of a variety of agricultural products and is an established economic sector, and provides employment on a formal and informal basis. Ghana produces a variety of crops in various climatic zones which range from dry savanna to wet forest and which run in east–west bands across Ghana. Agricultural crops, including yams, grains, cocoa, oil palms, kola nuts, and timber, form the base of agriculture in Ghana's economy. In 2013 agriculture employed 53.6% of the total labor force in Ghana.

In 2006 approximately 80% of Chad's labor force was employed in the agricultural sector. This sector of the economy accounted for almost half of the GDP as of the late 1980s. With the exception of cotton production, some small-scale sugar cane production, and a portion of the peanut crop, Chad's agriculture consisted of subsistence food production. The types of crops that were grown and the locations of herds were determined by considerable variations in Chad's climate. 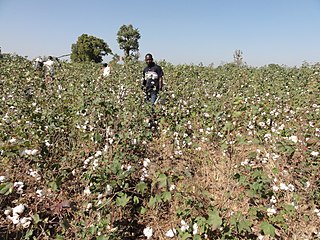 Agriculture in Cameroon is an industry that has plenty of potential.

Agriculture was once the chief economic activity in Guyana despite the coastal plain which comprised only about 5 percent of the country's land area being suitable for cultivation of crops. Much of this fertile area lay more than one meter below the high-tide level of the sea and had to be protected by a system of dikes and dams, making agricultural expansion expensive and difficult. In the 1980s, there were reports that the 200-year-old system of dikes in Guyana was in a serious state of disrepair. Guyana's remaining land area is divided into a white sand belt, which is forested, and interior highlands consisting of mountains, plateaus, and savanna. 2% of the land is arable land.

Peanut Corporation of America (PCA) was a peanut-processing business with headquarters in Lynchburg, Virginia, plants in other southern states, and distribution across the United States, now defunct as a result of one of the most massive and lethal food-borne contamination events in U.S. history. PCA was founded in 1977 and initially run by Hugh Parnell, father of Stewart Parnell, with him and two other sons. The company was sold in 1994–1995 with the senior Parnell retiring, and with Stewart Parnell and others remaining with the new company as consultants. In 2000, control of PCA returned to Stewart Parnell via a private sale. Over this history, PCA came to operate processing facilities in Blakely, Georgia, Suffolk, Virginia, and Plainview, Texas, providing peanut and peanut butter products primarily to the "institutional food" market, to food manufacturers for use in cookies, snacks, ice cream, and dog treats, and to other low-end markets.

Peanut production in China contributes to the national economy.