Aranaputa is an Amerindian village [1] in the Upper Takutu-Upper Essequibo (Region 9), Guyana. It is located in the Pacaraima Mountains.

The name Aranaputa comes from the Makushi word for 'burnt up', due to various instances of fire in the village. [2]

The 2012 census population is 353. [3] In addition to English, Wapishana, and Macushi language are also commonly spoken languages. It has a nursery and a primary school, but secondary schooling is done in Annai Secondary situated at Bina Hill in Kwatamang. [4] Healthcare is provided by a public health centre. Major economic activities include peanut production, livestock rearing, and tourism. [5]

It has a satellite village, Kuribu. Chairman of their Community Development Council is Aiden Jacobus. [4] [6]

Amerindians have historically resided in the area, however settlement was often temporary. In 1958, the government demarcated plots of land and leased it out to coastlanders, while designating another area as an Amerindian reservation. By 1940, the village had 4 coastland families, 3 of Portuguese origin and 1 Afro-Guyanese. Ranching and growing tobacco were their main economic trades. [2] 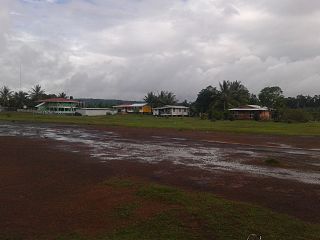 The Patamona are an Amerindian tribe native to the Pakaraima Mountains of Guyana. They are also known as the Kapon. There are about 5,000 living members of this and closely related ethnic groups in Guyana. The population in Brazil is estimated at 125 people.

Bethany Village is a mission located on the Araburia River, a tributary three miles up the Supenaam River in Region #2, Essequibo in Guyana.

Guyana, officially the Co‑operative Republic of Guyana, is a country on the northern mainland of South America. It is considered part of the Caribbean region because of its strong cultural, historical, and political ties with other Caribbean countries and the Caribbean Community (CARICOM). Guyana is bordered by the Atlantic Ocean to the north, Brazil to the south and southwest, Venezuela to the west, and Suriname to the east. With 215,000 square kilometres (83,000 sq mi), Guyana is the third-smallest sovereign state by area in mainland South America after Uruguay and Suriname; it is also the second-least populous sovereign state in South America after Suriname.