Although an Amerindian settlement has existed along the Kaituma River for some time, it was only after the discovery of manganese at nearby Matthew's Ridge [3] that Port Kaituma was developed. As Matthew's Ridge was not located on a navigable river, a canal was cut from the Kaituma River and Port Kaituma was constructed. [4] At the time of the manganese mining, Port Kaituma had three separate areas. The mine managers' house and the guest house were in a large clearing separated by a short road through the forest from the main rail-head and manganese loading facility. A longer road led in the opposite direction to the area known as 'Bottom Floor' where the workers lived.

The manganese was transported from Matthew's Ridge via a 40-mile railway and then shipped from Port Kaituma to Chaguaramas Bay in Trinidad, from where it was distributed for industrial use with a large proportion going to Stavanger in Norway. The project was operated by subsidiaries of Union Carbide.[ citation needed ]

Two Trinidadian oil tankers, the Ambrosio and the Inverrosa, were converted into manganese carriers as part of this project. They made the trip from Port Kaituma to Chaguaramas on a regular four-day cycle for much of the 1960s. With a displacement of just under 3,000 tons, they were originally built in the mid 1920s with a shallow draft to ship oil across shallow sand-bars at the mouth of Lake Maracaibo in Venezuela. [5] [6] The ability to slip over sand bars in very shallow water was essential to their being able to get across Waini Bar at the mouth of the Kaituma River.

Port Kaituma's significance grew further following the proclamation from the then-President of Guyana, Forbes Burnham, that Guyana should become more self-sufficient by populating the interior of the country. Matthew's Ridge was highlighted as a potential new capital city, [7] and within Port Kaituma a large secondary school was constructed to educate students sent from all over Guyana. During its heyday, the school boasted over 800 students, of which most were housed in two large dormitory buildings. [8]

In the 1970s, Jim Jones' commune of Jonestown was built only seven miles away from Port Kaituma. The first killings of the November 1978 Jonestown deaths occurred in Port Kaituma when Leo Ryan, a U.S. Congressman from California, and others were gunned down while boarding a small Twin Otter aircraft on the local airstrip. In the aftermath and clean-up operation that ensued, many items from the commune were acquired by the residents of Port Kaituma.

Over the next 25 years, a large foreign-owned logging company came and went, the manganese factory at Matthew's Ridge ceased working and the railway linking Matthew's Ridge and Port Kaituma was closed and in some parts cut up. The school's importance diminished and fell into a state of disrepair.

Today, Kaituma serves as the gateway to the nearby jungle where the now predominant industry of small-scale gold mining takes place. [9] The transient nature of many of these porkknockers (gold miners) has led to problems of gun crime, robbery, murder and bribery in the unpoliced hinterlands. This however does not perturb a continual flow of workers through the town, including a recent influx of Brazilians.

Port Kaituma Community School provides nursery through secondary education. A hospital was commissioned in 2020. [10] Also in 2020, Guyana Gold Board opened an office in Port Kaituma for testing and buying gold. [11]

Matthews Ridge is a small village within the Barima-Waini administrative region of Guyana. The village name comes from the name of a public official, Matthew Young, as well as the ridges in the area. The village is divided into three sections, Heaven’s Hill, Hell Hill and the valley. 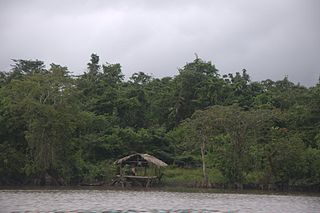 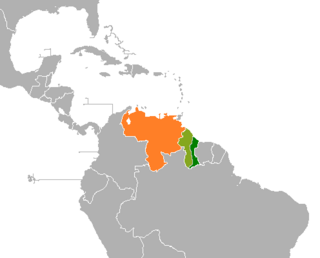 Guyana – Venezuela relations include diplomatic, economic and other interactions between the neighboring countries of the Co-operative Republic of Guyana and the Bolivarian Republic of Venezuela.

The Barama River is a tributary of the Waini River, both being in the Barima-Waini administrative region of Guyana.

The Puruni River is a river of Guyana in the Cuyuni-Mazaruni region.

The Oko River is a river of Guyana, a tributary of the Wenamu River and a part of the middle-Mazaruni.