Rose Hall was once owned by Dutch planters and later purchased by former slaves. In 1908, it acquired village status; and it wasn't until 1970 that it became a town. Rose Hall has an area of 13 km² and a population of about 8,000. [2]

Rose Hall is a hub for the surrounding areas where people buy raw materials for clothing and grocery in the Berbice region. Two banks and stores lined the main public roads. Most of the stores are clothing stores and grocery stores. [3] The Welfare Centre Ground is a cricket ground that formerly held first-class cricket matches. 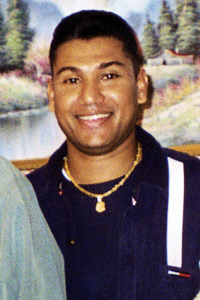 Nezam Ahmed Hafiz was a Guyanese-born American cricketer. Hafiz was a right-handed middle order batsman who bowled right-arm medium pace. He died in Manhattan during the September 11 attacks.

Courtney Alexander Gonsalves was a Guyanese cricketer who played a single first-class match for Essequibo in the final of the 1980–81 inter-county Jones Cup, and also represented the Guyanese national side in the 1980–81 limited-overs Geddes Grant/Harrison Line Trophy. He later coached the Canadian national under-19 team.

Imran Khan is a Guyanese cricketer who played four Twenty20 matches for the Guyanese national side in 2006.

Paul Gordon Wintz is a Guyanese cricketer who has played for the Guyanese national side in West Indian domestic cricket, and also for the Guyana Amazon Warriors franchise in the Caribbean Premier League (CPL). He is a right-arm fast-medium bowler.

William Michael Jeffrey was a Guyanese cricketer who represented the Guyanese national team in West Indian domestic cricket. He was an all-rounder who bowled right-arm off-spin and batted right-handed.

Vishal Nagamootoo is a former Tamil-Guyanese cricketer who represented the Guyanese national team in West Indian domestic cricket. He played as a wicket-keeper.

Leonard Adrian "Bill" Westmaas was a Guyanese cricketer. He played in eight first-class matches for British Guiana from 1945 to 1948.