Mabaruma is the administrative centre for Region One (Barima-Waini) of Guyana. [2] It is located close to the Aruka River (the Venezuelan border) on a narrow plateau above the surrounding rainforest at an elevation of 13 metres.

Mabaruma was once a large estate owned by the Broomes family. Cocoa was one of the products manufactured before the Government of Guyana bought part of the land to build Governmental Institutions. Mainly Amerindians live in this area. Some of the tribes include Arawaks, Caribs and Warao. Mabaruma also has a large Afro-Guyanese population with small East Indian, Chinese and Portuguese communities. [1]

It replaced Morawhanna as the regional capital [3] after the former was deemed at risk from flooding. [4] Mabaruma became a town in 2016 with the surrounding villages of Hosororo and Kumaka joining. [5]

There is a government guest house in the town as well as the Mabaruma Post Office, Mabaruma Hospital, and a Police Station where court cases are tried. [6] Because of its size however, only petty crimes are tried.

Mabaruma contains the region's first secondary school, North West Secondary School, established in 1965. [7] Most local people either do farming or fishing work for a living. 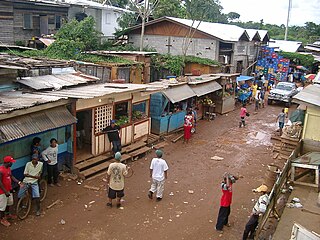 North West Secondary School is a secondary school in Mabaruma, capital town of the Barima-Waini region in northern Guyana. The school was established in 1965, being the only secondary school in the region until the establishment of Santa Rosa school in 1992. The school is run by a local school board, having been led by a headmaster until 2005. Classes originally ran from forms one to five, though changed to transitional classes in 2015 to accommodate a rising population of school-age children in Mabaruma and its surrounding areas. 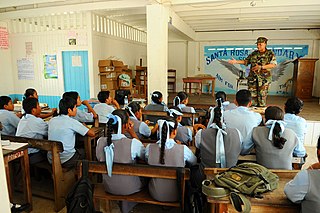 Santa Rosa Secondary School is a secondary school in Santa Rosa, in the Barima-Waini region of northern Guyana. The school was established in 1991, making it the second secondary school in the area after the establishment of North West Secondary School in 1965. Prospective students undergo competitive examination and may take their Caribbean Examinations Council (CXC) examinations upon graduation. As of 2009, the school taught over 650 students, up from 264 in 2005. Of these 264, 72 of whom were housed in a dormitory sponsored by the Inter-American Development Bank. A third wing was built in 2009, adding nine new classrooms to the school. Jonny La'go Payne assumed the role of headmaster in 2005.

The Barima River is a tributary of the Orinoco River, entering 6 kilometres (4 mi) from the Atlantic Ocean. It originates from the Imataka Mountains in Guyana, flowing for approximately 340 kilometres (210 mi) before entering Venezuela about 80 kilometres (50 mi) from its mouth. Near the Duquari Creek, the Arawatta Rock, a distinct large granite rock, is located.

Carolyn Allison Rodrigues-Birkett is a Guyanese politician who was appointed Permanent Representative of Guyana to the United Nations in 2020. She previously served as Director of the Food and Agriculture Organization Liaison Office in Geneva from 2017 to 2020 and Minister of Foreign Affairs of Guyana from 2008 to 2015.