Abary is a small community in the Mahaica-Berbice Region of Guyana, near the mouth of the Abary River, 43 miles from Georgetown. Abary is known for the Abary Bridge located on the Main Highway. [2] The bridge was originally a railway bridge and has a very steep ascend. [3] The bridge was designed by Joseph Walter Holder who also built the Demerara Harbour Bridge. [2] 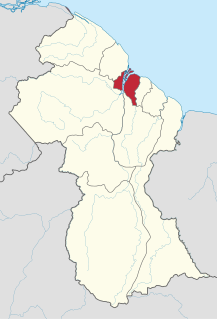 The Railways of Guyana comprised two public railways and several industrial railways, including the first in South America.

Orealla is an Indigenous community in the East Berbice-Corentyne Region of Guyana, on the Courantyne River, approximately 33 miles (53 km) south of Crabwood Creek and 11 miles (18 km) north of Epira, located at 5°17′50″N57°20′50″W, altitude 11 metres. 15 miles (24 km) south-east on the other side of the Courantyne River lies the Surinamese village of Apoera. Orealla is an indigenous people village.

Esau and Jacob is a village in the Mahaica-Berbice Region of Guyana. One of the oldest villages on the Mahaicony River, Esau and Jacob was named by Dutch settlers after Biblical Characters. A rice-producing village, it is 11 kilometres (6.8 mi) south of the East Coast Highway, and is accessible by road. The village used to have a school, but it closed down because there weren't enough children.

Governor Light is a small community in the Mahaica-Berbice Region of Guyana. It stands on the coastal plain, at just one metre above sea-level, along the Mahaicony River, approximately 14 kilometres upstream from its mouth. Governor Light is named after Henry Light, the 3rd Governor of British Guiana. 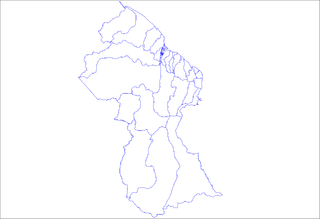 The regions of Guyana are divided into 27 Neighbourhood Democratic Councils. The neighbourhood councils are listed below, by region:

Catherinas Lust is an estate located approximately 13.8 km from the town of Fort Wellington in the Mahaica-Berbice region of Guyana in South America.

Fort Wellington is a town located in the Mahaica-Berbice region of Guyana, serving as its regional capital. The town is named after a fort built by the English which was located at the local police station. The town has been built on the plantation Catherinas Lust. It is mainly the administrative centre and contains a hospital, court house and regional council.