Better Hope is a village located in the Demerara-Mahaica region of Guyana. The village has been named after the Plantation Betterhoop [2] It was originally a fishing village with many working on the sugar estates and nearby farms. [3] The majority of the population is Indo-Guyanese with a minority of Afro-Guyanese. [3]

In 2018, a road was named in honor of Moses Dwarka, a competitive marathoner born in the town. [4] Moses represented British Guiana in the 1959 Pan American Games. 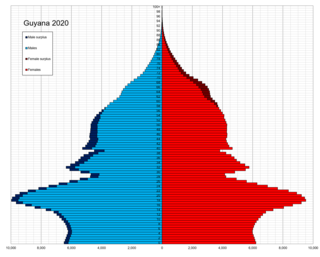 This article is about the demographic features of Guyana, including population density, ethnicity, education level, health of the populace, economic status, religious affiliations and other aspects of the population.

Victoria is located on the Atlantic coast of Guyana, 29 kilometres (18 mi) east of Georgetown and bordered by Cove and John to the west and Belfield to the east. It was the first village in Guyana to be bought by the combined resources of Africans who had recently won their freedom from slavery.

Annandale is a community in the Demerara-Mahaica region of Guyana, located on the Atlantic Ocean between Buxton, and Lusignan. Many of the inhabitants originally came from the Lusignan estate, while the former slaves of the plantation, bought the neighbouring Orange Nassau plantation and named it Buxton. Annandale is mainly an Indo-Guyanese community. It is divided in Annandale North, South, West and Courabane Park. The economy used to be dependant on the nearby sugar estates. The secondary school for the region is located in Annandale.

Guyanese Americans are an ethnic group of Americans who can trace their ancestry back to Guyana. As of 2011, there are 208,899 Guyanese Americans currently living in the United States. The majority of Guyanese live in New York City – some 140,000 – making them the fifth-largest foreign-born population in the city. 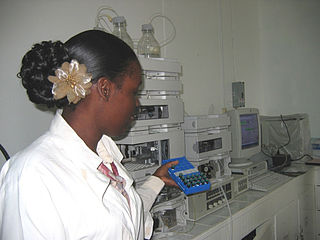 Women in Guyana are a cross-section of Guyanese society whose numbers have fluctuated with time. A country with primarily Indo-Guyanese, Afro-Guyanese and Amerindian women, Guyana has also been home to women of European or Chinese descent. The country has had a female president, Janet Jagan. Although it is part of South America, Guyana is culturally and historically aligned with the Commonwealth Caribbean and is often compared to Trinidad and Tobago.

Charrandas Persaud is a Canadian-Guyanese lawyer and politician, who is Guyana's High Commissioner to India since March 2021. He was a member of the Guyanese National Assembly from 2015 to 2018, representing the Alliance for Change party in the East Berbice-Corentyne region.