Per Lennart Krusell, born 1959, is a Swedish macroeconomic theorist who is currently the Torsten and Ragnar Soderberg Chair in Economics and the Institute for International Economic Studies, Stockholm University, as well as Centennial Professor of Economics at the London School of Economics.

Until recently, he was a Professor of Economics at Princeton University and, before that, held positions at the University of Rochester, the University of Pennsylvania, and Northwestern University. He received numerous awards and grants, most recently the 2007 Söderberg Prize and a 2.1 Million Euro 2008 senior research grant from the European Research Council. Krusell's research has focused on macroeconomics, broadly defined, with particular contributions in the areas of technological change, inequality, political economy, macroeconomic policy, and labor economics. He is currently pursuing a long-term project on the interactions between global climate change and the economy. He is especially known for developing the most widely used computational algorithm for calculating macroeconomic equilibrium under rational expectations in economies with heterogeneous agents and aggregate uncertainty when financial markets are incomplete. [1] His work with Jeremy Greenwood and Zvi Hercowitz on investment-specific technological progress has also been extremely influential. [2]

Krusell was elected a member of the Royal Swedish Academy of Sciences in 2003. Since 2003, he is a member of the Prize Committee for The Bank of Sweden Prize in Economic Sciences in Memory of Alfred Nobel, and its chair since 2011. He served as the president of the European Economic Association in 2020. [3]

1. "Long-Run Implications of Investment-Specific Technological Progress",JSTOR   2951349 American Economic Review, June 1997, (with Jeremy Greenwood and Zvi Hercowitz). Casual empiricism suggests that technological progress is often embodied in the form of new and improved capital goods. Many examples come to mind: computers, robots, cell phones and the like. The paper analyzes the role of this type of technological change in U.S. economic growth. The results suggest that investment-specific technological progress accounts for the major part of U.S. economic growth over the postwar period. [4]

2."The Role of Investment-Specific Technological Change in the Business Cycle",doi : 10.1016/S0014-2921(98)00058-0 European Economic Review, 2000, (with Jeremy Greenwood and Zvi Hercowitz). This research incorporates the notion of investment-specific technological progress into a business cycle model.

Economic growth can be defined as the increase in the inflation-adjusted market value of the goods and services produced by an economy over time. Statisticians conventionally measure such growth as the percent rate of increase in real gross domestic product, or real GDP.

Consumers often choose not directly from the commodities that they purchase but from commodities they transform into goods through a household production function. It is these goods that they value. The idea was originally proposed by Gary Becker, Kelvin Lancaster, and Richard Muth in the mid-1960s. The idea was introduced simultaneously into macroeconomics in two separate papers by Jess Benhabib, Richard Rogerson, and Randall Wright (1991); and Jeremy Greenwood and Zvi Hercowitz (1991). Household production theory has been used to explain the rise in married female labor-force participation over the course of the 20th century, as the result of labor-saving appliances. More recently with the rise of the DIY or Maker movement household production has become more sophisticated. For example, consumers can now convert plastic wire into high-value products with inexpensive 3-D printers in their own homes.

The Harrod–Domar model is a Keynesian model of economic growth. It is used in development economics to explain an economy's growth rate in terms of the level of saving and of capital. It suggests that there is no natural reason for an economy to have balanced growth. The model was developed independently by Roy F. Harrod in 1939, and Evsey Domar in 1946, although a similar model had been proposed by Gustav Cassel in 1924. The Harrod–Domar model was the precursor to the exogenous growth model. 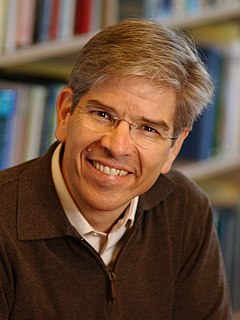 Paul Michael Romer is an American economist at the NYU Stern School of Business, Department of Economics, and School of Law. He is also the co-recipient of the Nobel Memorial Prize in Economic Sciences in 2018 for his contributions to endogenous growth theory. He was awarded the prize "for integrating technological innovations into long-run macroeconomic analysis".

Capacity utilization or capacity utilisation is the extent to which a firm or nation employs its installed productive capacity. It is the relationship between output that is produced with the installed equipment, and the potential output which could be produced with it, if capacity was fully used.The Formula is the actual output per period all over full capacity per period expressed as a percentage.

Greenwood–Hercowitz–Huffman preferences are a particular functional form of utility developed by Jeremy Greenwood, Zvi Hercowitz, and Gregory Huffman, in their 1988 paper Investment, Capacity Utilization, and the Real Business Cycle. It describes the macroeconomic impact of technological changes that affect the productivity of new capital goods. The paper also introduced the notions of investment-specific technological progress and capacity utilization into modern macroeconomics.

Robert A. Blecker is an American economist who is currently a Professor in the Department of Economics at American University in Washington, DC. He is also Affiliate Faculty of the American University School of International Service and Center for Latin American and Latino Studies, and a Research Associate at the Economic Policy Institute and Political Economy Research Institute. His research has made contributions to the fields of post-Keynesian and neo-Kaleckian macroeconomics, open economy macroeconomics, international trade theory and policy, global imbalances and the U.S. trade deficit, the North American Free Trade Agreement, the economy of Mexico, export-led growth, and the theory of balance-of-payments constrained growth.

Carol A. Corrado is an American economist who was the former chief of industrial output at the Federal Reserve Board and currently serves as a senior advisor and research director in economics on The Conference Board. She serves as a member of the executive committee for the National Bureau of Economic Research's (NBER) conference on research on income and wealth. She is a senior policy scholar at Georgetown University McDonough School of Business Centre for Business and Public Policy where she focuses on economics of growth and innovation as well as fiscal and monetary policies. In addition to these positions, Corrado is involved with the American Statistical Association as well as the Technical Advisory Committee of the Bureau of Labor Statistics. With the American Statistical Association Corrado serves as the chair-elect of Business and Economics.

Zvi Hercowitz is professor emeritus at Tel Aviv University's School of Economics and has been a member of the montetary committee of the Bank of Israel since 2017.