The partial denominators {ai} can in general be any real or complex numbers. That general case is treated in the article convergence problem. The remainder of this article is devoted to the subject of simple continued fractions that are also periodic. In other words, the remainder of this article assumes that all the partial denominators ai (i ≥ 1) are positive integers.

where, in the second line, a vinculum marks the repeating block. [1] Some textbooks use the notation

where the repeating block is indicated by dots over its first and last terms. [2]

Such periodic fractions are in one-to-one correspondence with the real quadratic irrationals. The correspondence is explicitly provided by Minkowski's question-mark function. That article also reviews tools that make it easy to work with such continued fractions. Consider first the purely periodic part

This can, in fact, be written as

being integers, and satisfying

Explicit values can be obtained by writing

which is termed a "shift", so that

and similarly a reflection, given by

. Both of these matrices are unimodular, arbitrary products remain unimodular. Then, given

as above, the corresponding matrix is of the form [3]

as the explicit form. As all of the matrix entries are integers, this matrix belongs to the modular group

where the coefficients a, b, and c are integers, and the discriminant, b2− 4ac, is greater than zero. By the quadratic formula every quadratic irrational can be written in the form

is said to be reduced if

. For instance, the golden ratio

is greater than −1 and less than zero. On the other hand, the square root of two

where ζ is any reduced quadratic surd, and η is its conjugate.

From these two theorems of Galois a result already known to Lagrange can be deduced. If r > 1 is a rational number that is not a perfect square, then

In particular, if n is any non-square positive integer, the regular continued fraction expansion of √n contains a repeating block of length m, in which the first m − 1 partial denominators form a palindromic string.

Length of the repeating block

By analyzing the sequence of combinations

that can possibly arise when ζ = (P + √D)/Q is expanded as a regular continued fraction, Lagrange showed that the largest partial denominator ai in the expansion is less than 2√D, and that the length of the repeating block is less than 2D.

More recently, sharper arguments [5] [6] based on the divisor function have shown that L(D), the length of the repeating block for a quadratic surd of discriminant D, is given by

where the big O means "on the order of", or "asymptotically proportional to" (see big O notation).

The following iterative algorithm [7] can be used to obtain the continued fraction expansion in canonical form (S is any natural number that is not a perfect square):

Notice that mn, dn, and an are always integers. The algorithm terminates when this triplet is the same as one encountered before. The algorithm can also terminate on ai when ai = 2 a0, [8] which is easier to implement.

The expansion will repeat from then on. The sequence [a0; a1, a2, a3, ...] is the continued fraction expansion:

Now, loop back to the second equation above.

Consequently, the simple continued fraction for the square root of 114 is

√114 is approximately 10.67707 82520. After one expansion of the repetend, the continued fraction yields the rational fraction

A more rapid method is to evaluate its generalized continued fraction. From the formula derived there:

evaluated at the third term and every six terms thereafter. 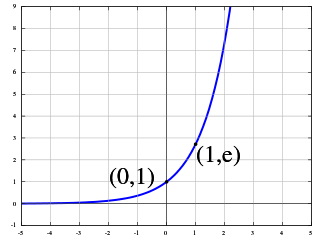 In number theory, Aleksandr Yakovlevich Khinchin proved that for almost all real numbers x, coefficients ai of the continued fraction expansion of x have a finite geometric mean that is independent of the value of x and is known as Khinchin's constant.

In mathematics, a quadratic equation is a polynomial equation of the second degree. The general form is

The decimal value of the natural logarithm of 2 is approximately

Hermite's problem is an open problem in mathematics posed by Charles Hermite in 1848. He asked for a way of expressing real numbers as sequences of natural numbers, such that the sequence is eventually periodic precisely when the original number is a cubic irrational.