The Pointe de Bellevue is a mountain in the Chablais Alps, overlooking Monthey in Valais. It is located in the northern foothills, which are separated from the Dents du Midi by the Val d'Illiez and Pas de Morgins 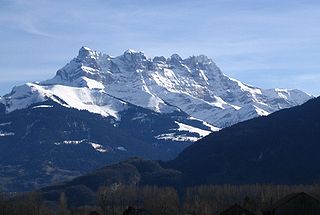 Monthey is the capital of the district of Monthey in the canton of Valais in Switzerland.

French Guiana is an overseas region of France, located on the northern coast of South America between Suriname and Brazil. See also the article on the geography of Suriname.

Sainte-Anne-de-Bellevue is an on-island suburb located at the western tip of the Island of Montreal in southwestern Quebec, Canada. It is the second oldest community in Montreal's West Island, having been founded as a parish in 1703. The oldest, Dorval, was founded in 1667. 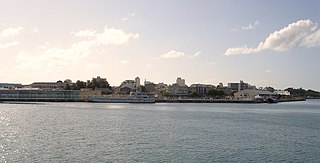 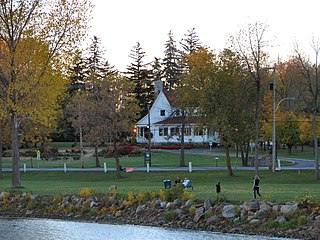 The West Island is the unofficial name given to the cities, towns and boroughs at the western end of the Island of Montreal, in Quebec, Canada. It is generally considered to consist of the cities of Dorval, Pointe-Claire, Kirkland, Dollard-des-Ormeaux, Beaconsfield, Baie-D'Urfé, Sainte-Anne-de-Bellevue, the village of Senneville, and two boroughs of the city of Montreal: Pierrefonds-Roxboro and L'Île-Bizard–Sainte-Geneviève. Furthermore, given the nature of suburban demographic development in Montréal, off-island suburbs towards the west of the island in addition to outer-ring boroughs of Montréal are sometimes considered part of the West Island. This is in large part due to similarities in personal income, design of the communities, services available, quality of life and economic engines supporting the population as well as the bilingual characteristic of the population.

Pointe-Claire is a suburb of Greater Montreal in Quebec, Canada. Pointe-Claire is largely residential in character, but is also the site of much economic activity, such as retail activity, light manufacturing, various corporate offices, and a hospital. The population is about 31,000 and about 7,000 people are employed there.

Lac-Saint-Louis is a federal electoral district in Quebec, Canada, that has been represented in the House of Commons of Canada since 1997. Its population in 2001 was 101,919. 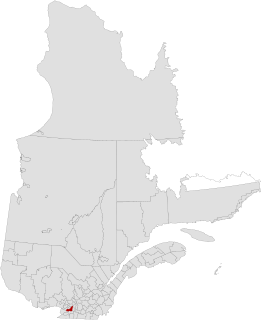 Montréal is one of the administrative regions of the Canadian province of Quebec.

Vaudreuil was a federal electoral district in the province of Quebec, Canada, represented in the House of Commons of Canada from 1867 to 1914, and from 1968 to 1997.

Montreal was one of the cities in Quebec affected by the 2000–2006 municipal reorganization in Quebec. On January 1, 2002, all the municipalities on the island of Montreal were merged into the city of Montreal.

Pointe-Noire is a commune on Guadeloupe, a French overseas department in the Caribbean. It is located on the northwest coast of the island of Basse-Terre.

The Marguerite-Bourgeois School Board is a French language public school board on Montreal Island, Quebec, Canada. Its headquarters is in the Saint-Laurent borough of Montreal. Its education centre is in LaSalle, also in Montreal. It is named after Marguerite Bourgeoys (1620–1700), a French nun who helped start education infrastructure in the new colony.

The Autorité régionale de transport métropolitain (ARTM) is responsible for all park and ride lots in Montreal and its surrounding area. It operates 61 lots, many that are adjacent to metropolitan bus terminals, commuter rail stations, or STM Metro stations.

The Bec du Corbeau is a mountain of the Chablais Alps, overlooking Morgins in the Swiss canton of Valais. It lies west of Pointe de Bellevue, on the watershed between the valleys of the Dranse d'Abondance and Illiez. The French border runs west of the mountain.

Pointe-Claire is a planned Réseau express métropolitain station in the city of Pointe-Claire, Quebec, Canada. It is planned to be operated by CDPQ Infra and serves as a station of the Sainte-Anne-de-Bellevue branch of the REM.

Des Sources station is a planned Réseau express métropolitain station in the city of Pointe-Claire, Quebec, Canada. It is planned to be operated by CDPQ Infra and serves as a station of the Sainte-Anne-de-Bellevue branch of the REM. The planned site is near the intersection of boulevard Des Sources and boul. Hymus.