Last updated June 24, 2021
Communal gathering where each guest contributes a different dish of food to be shared
For other uses, see Pot luck (disambiguation).

A potluck is a communal gathering where each guest or group contributes a different, often homemade, dish of food to be shared.

While there exists some disagreement as to its origin, two principal theories exist: the combination of the English "pot" and "luck," or the North American indigenous communal meal potlatch .

The word pot-luck appears in the 16th century English work of Thomas Nashe, and used to mean "food provided for an unexpected or uninvited guest, the luck of the pot." [4] The modern execution of a "communal meal, where guests bring their own food," most likely originated in the 1930s during the Depression. [5]

Potluck dinners are events where the attendees bring a dish to a meal. Potluck dinners are often organized by religious or community groups, since they simplify the meal planning and distribute the costs among the participants. Smaller, more informal get-togethers with distributed food preparation may also be called potlucks. The only traditional rule is that each dish be large enough to be shared among a good portion (but not necessarily all) of the anticipated guests. In some cases each participant agrees ahead of time to bring a single course, and the result is a multi-course meal. This agreement rectifies the problem of many participants bringing the same dish. Guests may bring in any form of food, ranging from the main course to desserts.

Dinner usually refers to what is in many Western cultures the largest and most formal meal of the day, which some Westerners eat in the evening. Historically the largest meal used to be eaten around midday, and called dinner. In Western cultures, especially among the elite, it gradually migrated later in the day over the 16th to 19th centuries. However, the word "dinner" can have different meanings depending on culture, and may mean a meal of any size eaten at any time of day. In particular, it is still sometimes used for a meal at noon or in the early afternoon on special occasions, such as a Christmas dinner. In hot climates, people have always tended to eat the main meal in the evening, after the temperature has fallen.

A buffet can be either a sideboard or a system of serving meals in which food is placed in a public area where the diners serve themselves. A form of service à la française, buffets are offered at various places including hotels, restaurants, and many social events. Buffet restaurants normally offer all-you-can-eat food for a set price, but some measure prices by weight or by number of dishes. Buffets usually have some hot dishes, so the term cold buffet has been developed to describe formats lacking hot food. Hot or cold buffets usually involve dishware and utensils, but a finger buffet is an array of foods that are designed to be small and easily consumed only by hand, such as cupcakes, slices of pizza, foods on cocktail sticks, etc.

Tableware are the dishes or dishware used for setting a table, serving food and dining. It includes cutlery, glassware, serving dishes and other items for practical as well as decorative purposes. The quality, nature, variety and number of objects varies according to culture, religion, number of diners, cuisine and occasion. For example, Middle Eastern, Indian or Polynesian food culture and cuisine sometimes limits tableware to serving dishes, using bread or leaves as individual plates. Cups are not dishes. Special occasions are usually reflected in higher quality tableware. 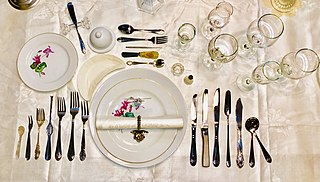 A full-course dinner is a dinner consisting of multiple dishes, or courses. In its simplest form, it can consist of three or four courses; for example: first course, a main course, and dessert.

Table manners are the rules of etiquette used while eating, which may also include the use of utensils. Different cultures observe different rules for table manners. Each family or group sets its own standards for how strictly these rules are to be followed.

Pressure Cooker is a game show about cooking and food in general. It was hosted by Chris Durham. It aired on the Food Network in 1998. 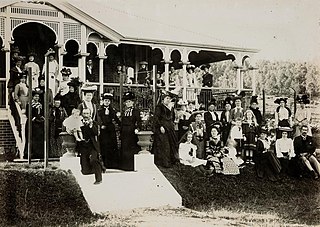 A house-warming party is a party traditionally held soon after moving into a new residence. It is an occasion for the hosts to present their new home to their friends, post-moving, and for friends to give gifts to furnish the new home. House-warming parties are generally informal.

Sara's Secrets was a Food Network show hosted by Sara Moulton who was the executive chef of Gourmet magazine. Sara’s Secrets aired from 2002 until 2007. Sara's Secrets offers the viewer recipes and techniques specifically focused to fit the viewer's busy lifestyle. 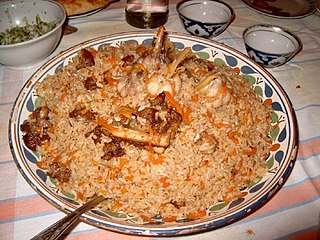 Uzbek cuisine shares the culinary traditions of Turkic peoples across Central Asia. There is a great deal of grain farming in Uzbekistan, so breads and noodles are of importance, and Uzbek cuisine has been characterized as "noodle-rich". Mutton is a popular variety of meat due to the abundance of sheep in the country and it is a part of various Uzbek dishes.

A progressive dinner -- or, more recently, safari supper -- is a dinner party with successive courses prepared and eaten at the residences of different hosts. Usually this involves the consumption of one course at each location. Involving travel, it is a variant on a potluck dinner and is sometimes known as a round-robin.

Lunch, an abbreviation for luncheon, is a meal eaten around midday. During the 20th century, the meaning gradually narrowed to a meal eaten midday. Lunch is commonly the second meal of the day, after breakfast. The meal varies in size depending on the culture, and significant variations exist in different areas of the world.

Tea has long been used as an umbrella term for several different meals. Isabella Beeton, whose books on home economics were widely read in the 19th century, describes afternoon teas of various kinds, and provides menus for the "old-fashioned tea", the "at-home tea", the "family tea", and the high tea. Teatime is the time at which the tea meal is usually eaten, which is late afternoon to early evening, being the equivalent of merienda. Tea as a meal is associated with the United Kingdom, and the Republic of Ireland, and some Commonwealth countries. Some people in Britain refer to their main evening meal as "tea" rather than dinner or supper. This article is instead concerned with the various types of secondary, lighter, meals called "tea".

Customs and etiquette in Chinese dining are the traditional behaviors observed while eating in Greater China. Traditional Han customs have spread throughout East Asia to varying degrees, with some regions sharing a few aspects of formal dining, which has ranged from guest seating to paying the bill.

The sixth season of the American reality television series The Next Food Network Star premiered on Sunday, June 6, 2010. Food Network executives, Bob Tuschman and Susie Fogelson, were joined again by Bobby Flay as the judges for this season. In addition, Giada De Laurentiis will serve as an on-set mentor. The series was filmed in Los Angeles, California and New York, New York. Winner Aarti Sequeira went on to host her show Aarti Party, which premiered on August 22, 2010. Runner-up Tom Pizzica was also hired to host a travel food show Outrageous Food, which began airing in November 2010. 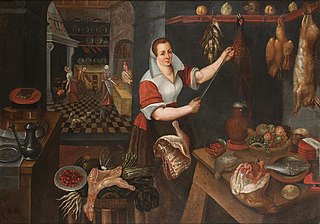