A quarterback keeper or keeper in American football is a designed play in which the quarterback does not pass or hand off the ball to another player and instead rushes forward with it in an effort to gain yardage. The play typically is run in instances where only a few yards are needed to gain a first down or touchdown, due to the threat of injury to the quarterback and most quarterbacks' ineffectiveness at running the ball when compared with a running back or fullback; however, this play is called more often with dual-threat quarterbacks. Variations include a quarterback sneak, quarterback sweep or quarterback "power". [1] [2]

This play differs from a quarterback scramble in that a scramble is an improvised play, while the keeper is a designed running play.

An option offense is a style of offense in American football that is predominantly based on a running play. However, instead of a specific play in mind, the offense has several "options" of how to proceed. Based on the defense, the quarterback may hand off to a full back up the middle (dive), hold on to the ball and run himself to either side of the field (keep), or pitch the ball to a trailing running back (pitch). Option offenses have traditionally relied heavily upon running plays, though modern option offenses now incorporate some passing plays called the Run-Pass Option or RPOs. Because they are run-based, option offenses are very effective in managing the game clock, giving the opposing team less time to score and keeping the option team's defense from tiring. However, this also means that when the option team is losing near the end of the game, and needs to score quickly, it is at a disadvantage. These schemes rely on timing, deception, and split-second decision-making under pressure, which, in turn, require precise execution and discipline. 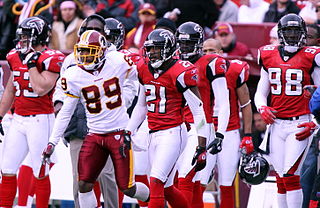 The 2006 Atlanta Falcons season was the franchise's 41st in the National Football League (NFL). The team attempted to improve on their 8–8 record in 2005.

The 2010 Georgia Tech Yellow Jackets football team represented the Georgia Institute of Technology in the 2010 NCAA Division I FBS football season. The Yellow Jackets were led by 3rd year head coach Paul Johnson and played their home games at Bobby Dodd Stadium. They are members of the Atlantic Coast Conference in the Coastal Division. They finished the season 6–7, 4–4 in ACC play. They were invited to the Independence Bowl where they were defeated by Air Force 7–14. 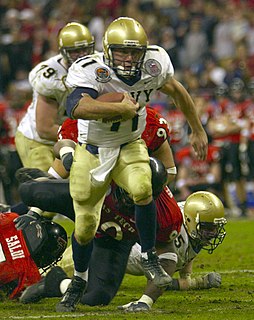 In gridiron football, a dual-threat quarterback, also known as a running quarterback, is a quarterback who possesses the skills and physique to run with the ball if necessary. With the rise of several blitz heavy defensive schemes and increasingly faster defensive players, the importance of a mobile quarterback has been redefined. While arm power, accuracy, and pocket presence – the ability to successfully operate from within the "pocket" formed by his blockers – are still the most important quarterback virtues, the ability to elude or run past defenders creates an additional threat that allows greater flexibility in the team's passing and running game. Overall, the dual-threat quarterback has been referred to as "the most complex position in sports" by Bleacher Report.