A bootleg is called to confuse the defense, by moving the quarterback away from where they expect him to be, directly behind the center. The quarterback's motion may also attract the attention of the defensive backs, allowing one of the receivers to become uncovered. The play is typically used by teams with mobile quarterbacks, such as Steve Young, [1] Randall Cunningham and Russell Wilson.

Additional variations can be combined with bootleg plays. In the West Coast offense variant designed around quarterback Michael Vick, counter techniques combined with play action bootleg plays served to provide several types of simultaneous misdirection which caused defensive players to freeze after often misjudging the intended direction of the play. These techniques, along with Vick's unusual athleticism, slow down and isolate defenders and provide extra space and time for the quarterback to survey the field and/or run the ball. [2]

The bootleg and its variants have become more common in recent years as the rules have been changed to permit a quarterback to avoid a sack by throwing the ball away once they are outside the "tackle box". Since the quarterback in a bootleg usually sets up to throw well outside the tackles, if he/she is in danger of taking a sack he/she can throw the ball safely out of bounds without risking an intentional grounding penalty.

The name comes from the fact that on a play action the quarterback often hides the ball from the defense by his thigh to make the run look more convincing. This is similar to the way bootleggers would hide whiskey in their trousers during Prohibition.

Pop Warner is given credit for inventing the bootleg play. [3] 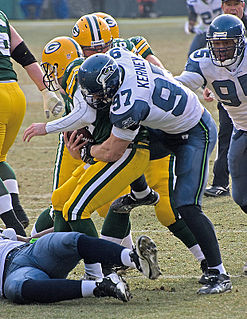 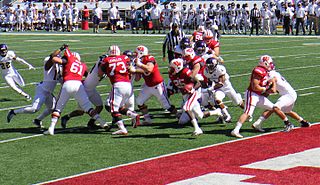 In American football, blocking or interference involves legal movements in which one player obstructs another player's path with their body. The purpose of blocking is to prevent defensive players from tackling the ball carrier, or to protect a quarterback who is attempting to pass, hand off or run the ball. Offensive linemen and fullbacks tend to do the most blocking, although wide receivers are often asked to help block on running plays and halfbacks may be asked to help block on passing plays, while tight ends perform pass blocking and run blocking if they are not running routes to receive passes. Overall, blocking is a skill that virtually every football player may be required to do at some point, even defensive players in the event of a turnover.