Garbage time is a term used to refer to the period toward the end of a timed sports competition that has become a blowout when the outcome of the game has effectively already been decided, and the coaches of one or both teams will decide to replace their best players with substitutes. [1] This serves to give those substitutes, who are usually less experienced or younger players, actual playing experience, as well as to protect the best players from the possibility of injury. [2]

Garbage time owes its name to the fact that this period in a game is frequently marked by a significant drop in the quality of game play. This occurs for two primary reasons. First, the players involved during that time are generally less experienced, having not played nearly as often as the starting players. Second, the fact that seldom-used substitutes usually desire more future playing time means that when those players do play, they are often more concerned with making an individual impression than with executing team play at its best; this is especially true during garbage time because at that point, the matter of which team will win has already been decided. [3]

In some sports, there are so-called "unwritten rules" for garbage time which indicate that the leading team should neither continue to play its starting players, devote unnecessary effort toward increasing the size of its lead, nor attempt particularly difficult and spectacular plays. [4] Doing so is interpreted as an unsportsmanlike attempt to embarrass or humiliate the trailing team, and in some cases may also be seen as retaliation, either against the opponent or the critics of the team in general (see running up the score for a more detailed explanation of this type of behavior). However, sometimes a team may have a legitimate motivation for running up the score, such as when margin of victory is a factor in rankings, as it was for many years in the Bowl Championship Series.

During garbage time, the trailing team can sometimes rack up an unusually high tally of statistics, leading the respective box score to be misleading with respect to their actual game performance. For instance, in American football, if the losing team is behind by several touchdowns, the offense may resort entirely to the passing game in a futile effort to catch up. At the same time, the leading team (on defense, with second or third string players) may allow them to complete plays (which benefits them by running out the clock). This may lead the statistics to indicate a high amount of passing yards for the losing squad, which would suggest the team performed better than in reality.

In some cases, both teams will use second or third string players in garbage time, and in college play, if first-string players are draft-eligible juniors or seniors, the second and third-string players will play to gain an advantage towards becoming first-string the next season. Sometimes the game experience gained by backup players during garbage time can be crucial to their development, since it is otherwise difficult for them to see playing time (especially certain positions such as the backup quarterback), although this experience comes with the caveats that garbage time is not a high pressure situation and that unusual strategies may be employed. Complementing this strategy, teams sit their first-string players during garbage time to give them more rest and avoid further injuries for future games. In baseball, teams losing by a blowout often use long reliever or even a position player as the pitcher; while the latter does save the bullpen for future games that position player is more prone to injury pitching.

In general, although not always the case, it is not unusual in American football for the losing team to have more passing attempts/yards than the winning team, unless the winning team is also using a reserve quarterback. Often in the college game a freshman quarterback will be playing during garbage time when the upperclassman quarterback has put the game out of reach, gaining experience with the second-string (and on rare occasions, third-string) receivers and backs.

Particularly at the youth level, garbage time is eliminated by the use of a mercy rule, which automatically ends a game when the margin of victory has reached a point that is presumably insurmountable.

The phrase garbage time is one of a number of commonly used basketball terms, each of which is thought to have either been coined by broadcaster Chick Hearn, or first given widespread exposure through Hearn's adoption of it for use during his broadcasts. [5] 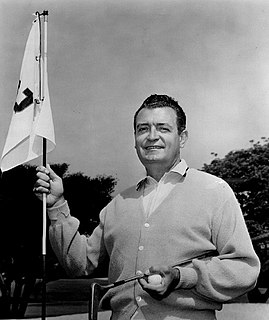 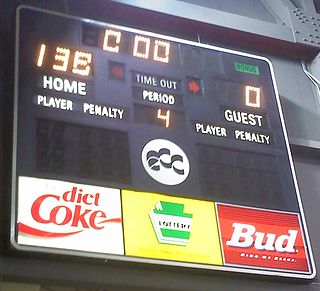 Running up the score occurs when a competitor continues to play in such a way as to score additional points after the outcome of the game is no longer in significant question and the team is all but assured of winning. Sporting alternatives include pulling out most of the team's first string players, or calling plays designed to run out the clock. The term and the concept are not common elsewhere in the world. Mercy rules are used in many amateur sports, which end the game when the score reaches a certain point.

Douglas Irvin Pederson is an American football coach and former quarterback in the National Football League (NFL). Pederson spent most of his 13-season playing career as a backup to Brett Favre on the Green Bay Packers, where he was part of the team that won a Super Bowl title in Super Bowl XXXI. He was also a backup to Dan Marino on the Miami Dolphins and a starter for the Philadelphia Eagles and Cleveland Browns until retiring in 2004. 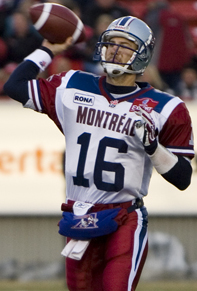 Jason Maas is the offensive coordinator of the Saskatchewan Roughriders of the Canadian Football League (CFL). He is best known for his career in the CFL as a quarterback, which was largely spent with the Edmonton Eskimos where he won two Grey Cup championships. He also spent time with the Montreal Alouettes and the Hamilton Tiger-Cats. He has spent time as a coach with the Toronto Argonauts and Ottawa Redblacks and was the head coach of the Eskimos from 2016 to 2019.

Brooks Michael Bollinger is a former American football quarterback in the National Football League (NFL) for the New York Jets, Minnesota Vikings, Dallas Cowboys and Detroit Lions. He also was a member of the Florida Tuskers in the United Football League (UFL). He played college football at the University of Wisconsin.

Kyle Wright is a former American football quarterback. He was signed by the Minnesota Vikings as an undrafted free agent in 2008 and was also a member of the San Francisco 49ers. He played college football at the University of Miami. 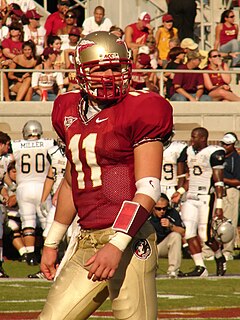 Andrew Skillern Weatherford is a former American football quarterback. He played college football at Florida State University from 2004 to 2008. 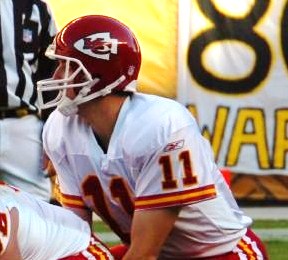 Damon Paul Huard is a former American football quarterback. He is the director of community relations and fundraiser for the University of Washington football program, his alma mater.

Billy Joe Tolliver is an American former professional football player who was a quarterback in the National Football League (NFL) and Canadian Football League (CFL) for twelve seasons with the San Diego Chargers, Atlanta Falcons, Houston Oilers, Shreveport Pirates, Kansas City Chiefs, and New Orleans Saints. Over the course of his NFL career, he played in 79 games, completed 891 of 1,707 passes for 10,760 yards, threw 59 touchdowns and 64 interceptions, and retired with a passer rating of 67.7.

Quinton George Porter is a former American professional gridiron football quarterback. He was on the practice squad for the Carolina Panthers of the National Football League. He was originally signed by the Houston Texans as an undrafted free agent in 2006. He played college football at Boston College. Porter has also been a player with the Hamilton Tiger-Cats of the CFL.

Richard Edward McIvor is a former American football player. He played quarterback for the Texas Longhorns and the NFL's St. Louis Cardinals. He was the Sheriff of Jeff Davis County, Texas. 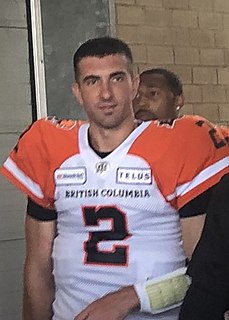 Daniel Matthew O'Brien is an American gridiron football assistant coach with the BC Lions of the Canadian Football League (CFL). As a professional quarterback, he had been a member of the Columbus Lions, Ottawa Redblacks, Edmonton Eskimos, and BC Lions. He played college football for the University of Maryland, University of Wisconsin and Catawba College.

Resting the starters is the substitution of regular players on a sports team with backup players, and it occurs when a team has clinched at least a playoff berth, often its division, and in many cases, home advantage, and no further regular season losses would hurt the team in the standings. This enables the team to avoid risking injury to the starters, and to give real life playing practice to backup players.

Matt Scott is a former American football quarterback. Scott was signed as an undrafted free agent by the Jacksonville Jaguars in 2013.