The drill has several variations. The most common involves two players lined up three yards opposite one another. A corridor is set up typically using three blocking bags on each side of the players lined up top to bottom to create a wall, and the walls are spaced about one yard apart. This creates an area of about three feet by nine feet. The two players, at the sound of the whistle, then run at one another and the drill is over when one of the players is on the ground, or if a ball carrier is involved when he is tackled, or if the ball carrier runs out of bounds. If a player is able to drive the other player out of the corridor, that also ends the drill. In a variation, the ball carrier must keep running until they score a touchdown.

Many high school and college teams use the Oklahoma drill as a way to kick off the first day of full contact practice. [1] While often criticized as excessive, some argue that it can be a critical tool used by coaches to evaluate players that might have looked good in non-contact drills, but have yet to face full contact. Other times the drill is used simply to get players in the proper mind-set for full contact practices, especially in high school and college, where many times players have gone up to eight months doing only non-contact drills.

The Oklahoma drill, along with other full-contact drills, was officially banned from NFL team practices in May 2019 following years of declining use and increasing concerns for player safety. [3] Veterans and high-profile NFL players rarely participate in pit drills owing to the higher risk of injury. Prior to the ban many team owners and coaches already refused to permit the drill. Notable exceptions had included the Chargers, and the Bengals [4] who used the drill as a kind of celebration of the first day of full-contact practices. On October 7, 2015, Dan Campbell reportedly used the Oklahoma drill to begin his first practice as interim head coach of the Miami Dolphins. [5] On July 29, 2018, the Detroit Lions used a reportedly safer variant of the Oklahoma drill during practice under first year head coach Matt Patricia. [6]

Super Bowl VII was an American football game between the American Football Conference (AFC) champion Miami Dolphins and the National Football Conference (NFC) champion Washington Redskins to decide the National Football League (NFL) champion for the 1972 season. The Dolphins defeated the Redskins by the score of 14–7, and became the first and still the only team in NFL history to complete a perfect undefeated season. They also remain the only Super Bowl champion to win despite having been shut out in the second half of the game. The game was played on January 14, 1973 at the Los Angeles Memorial Coliseum in Los Angeles, the second time the Super Bowl was played in that city. At kickoff, the temperature was 84 °F (29 °C), making the game the warmest Super Bowl. 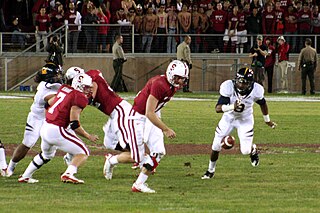 Daniel Raymon Wilkinson is a former American football player who was a defensive tackle in the National Football League (NFL) for thirteen seasons in the 1990s and 2000s. Nicknamed "Big Daddy", he played college football for the Ohio State University, was recognized as an All-American and received several national awards recognizing him as an outstanding college lineman. He was drafted first overall in the 1994 NFL Draft, and played professionally for the Cincinnati Bengals, Washington Redskins, Detroit Lions, and Miami Dolphins of the NFL.

The 1985 NFL season was the 66th regular season of the National Football League. The season ended with Super Bowl XX when the Chicago Bears defeated the New England Patriots 46–10 at the Louisiana Superdome. The Bears became the second team in NFL history to win 15 games in the regular season and 18 including the playoffs.

The horse-collar tackle is an American football maneuver in which a defender tackles another player by grabbing the back collar or the back-inside of an opponent's shoulder pads and pulling the ball carrier directly downward violently in order to pull his feet from underneath him. The technique is most closely associated with Pro Bowl safety Roy Williams.

The 2006 NFL season was the 87th regular season of the National Football League. Regular season play was held from September 7 to December 31, 2006. 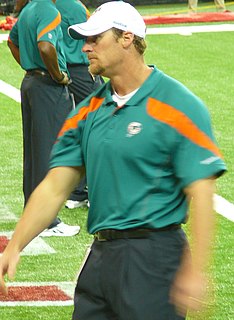 Daniel Allen Campbell is an American football coach and former tight end who is the assistant head coach and tight ends coach of the New Orleans Saints of the National Football League (NFL). He played college football for Texas A&M University. He was drafted by the New York Giants in the third round of the 1999 NFL Draft, and subsequently played for the NFL's Dallas Cowboys, Detroit Lions and New Orleans Saints. Campbell was named interim head coach of the Miami Dolphins in 2015, and was hired as the assistant head coach of the Saints in 2016. As a player, Campbell made the Super Bowl twice; with the Giants in 2000 and won with the Saints in 2009. He was also part of the 2008 Detroit Lions, the first NFL team to finish 0-16.

LeRoy Erwin "Ace" Gutowsky was a Russian-American professional American football fullback. He played professional football for eight years from 1932 to 1939 and set the NFL career rushing record in October 1939. He held the Detroit Lions' career and single-season rushing records until the 1960s.

Daniel James Amendola is an American football wide receiver for the Detroit Lions of the National Football League (NFL). He played college football at Texas Tech. He was signed by the Dallas Cowboys as an undrafted free agent in 2008, and has also played for the Philadelphia Eagles, St. Louis Rams, New England Patriots, and Miami Dolphins.

The 1954 Orange Bowl was a postseason American college football bowl game between the first-ranked Maryland Terrapins and the fourth-ranked Oklahoma Sooners. It was the twentieth edition of the Orange Bowl and took place at the Orange Bowl stadium in Miami, Florida on January 1, 1954.

4th and Long is an American reality television series hosted by Michael Irvin that premiered on Spike on May 18, 2009. The winner of the show earned a spot at the Dallas Cowboys training camp, with a shot of making the roster. The show puts six wide receivers against six defensive backs. The show was filmed at the Cotton Bowl, with Joe Avezzano as the coach for the receivers and Bill Bates as the coach for the backs.