The three-cone drill, 3-cone drill or L-drill is a test performed by American football athletes. It is primarily run to evaluate the agility, quickness and fluidity of movement of players by scouts. It is most commonly seen at the NFL Combine in preparation for the NFL draft but is also an important measurement for collegiate recruiting. While not as highly regarded a test as the 40-yard dash, it is still an important barometer used by team personnel to compare players. It is especially pertinent in the evaluation of Pass Rushers who must be able to maintain acceleration while working around Offensive Line players. [1]

Three cones are placed five yards apart from each other forming a right angle. The athlete starts with one hand down on the ground and runs to the middle cone and touches it. The athlete then reverses direction back to the starting cone and touches it. The athlete reverses direction again but this time runs around the outside of the middle cone on the way to the far cone running around it in figure eight fashion on his way back around the outside of the middle cornering cone. Athletes are timed for this whole procedure. This drill is primarily used to determine a player's agility. [2]

The NFL Scouting Combine is a week-long showcase occurring every February at Lucas Oil Stadium in Indianapolis, where college football players perform physical and mental tests in front of National Football League coaches, general managers, and scouts. With increasing interest in the NFL Draft, the scouting combine has grown in scope and significance, allowing personnel directors to evaluate upcoming prospects in a standardized setting. Its origins have evolved from the National, BLESTO, and Quadra Scouting organizations in 1977 to the media event it has become today.

Slotback, sometimes referred to as an A-back or, especially in the United States, slot receiver, is a position in gridiron football. The "slot" is the area between the last offensive lineman on either side of the center and the wide receiver on that side. A player who lines up between those two players and behind the line of scrimmage is a slotback. The position is a fixture of Canadian football and indoor football, but is also used in American football. The slotback is similar to the wide receiver but also has many of the same traits as a running back or tight end; a slotback lines up closer to the offensive line and often farther back than a wide receiver.

J. D. Runnels is a former American football fullback. He was drafted by the Chicago Bears in the sixth round of the 2006 NFL Draft. He played college football at Oklahoma.

Victor "Macho" Harris, Jr. is a former Canadian football defensive back. He recently played for the Winnipeg Blue Bombers of the Canadian Football League (CFL). He played college football at Virginia Tech and was drafted by the Philadelphia Eagles in the fifth round of the 2009 NFL Draft. Harris went on to play for the Washington Redskins and the Pittsburgh Steelers before signing with the Saskatchewan Roughriders on April 18, 2012.

Nike SPARQ is the name used under a marketing relationship between Nike and SPARQ, under which Nike sells a line of cross training footwear, apparel and equipment in the USA.

The Evaluation Camp or E-Camp is a three-day program in which athletes from Canadian universities are scouted by Canadian Football League general managers, coaches and scouts. The goal of the camp is for the eight CFL franchises to have a better ide of who they would like to draft in the following Canadian College Draft. The next E-Camp takes place on March 2–4, 2012. 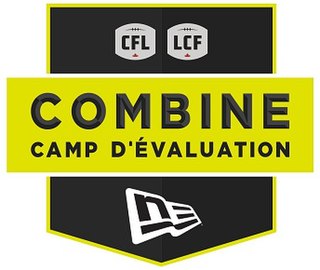 The CFL Combine is a three-day program in which athletes from Canadian universities and Canadians in the NCAA are scouted by general managers, coaches and scouts of the Canadian Football League (CFL). The goal of the camp is for the nine CFL franchises to have a better idea of whom they would like to draft in the CFL draft which usually takes place roughly six weeks after the camp. The first combined Evaluation Camp took place in 2000 in Toronto and continued every year in Toronto until 2016 when it was announced that Regina, Saskatchewan would host the combine in 2017. It was also suggested that the league will begin rotating the Combine hosts every year. Winnipeg hosted in 2018 and the event returned to Toronto with the hiatus of the CFL Week event.

Bradley Roby is an American football cornerback for the Houston Texans of the National Football League (NFL). He was drafted by the Denver Broncos in the first round of the 2014 NFL Draft. He played college football at Ohio State.

Leonard Cornilus Floyd is an American football outside linebacker for the Los Angeles Rams of the National Football League (NFL). He played college football at Georgia and was drafted by the Chicago Bears in the first round of the 2016 NFL Draft.

Adoree' K. Jackson is an American football cornerback and return specialist for the Tennessee Titans of the National Football League (NFL). He played college football at USC, and was drafted by the Titans in the first round of the 2017 NFL Draft.

Jordan Montae Jenkins is an American football outside linebacker for the New York Jets of the National Football League (NFL). He played college football at Georgia, and was drafted by the Jets in the third round of the 2016 NFL Draft.

The U Sports East–West Bowl is an annual postseason Canadian university football all-star game which showcases the top U Sports football prospects in the country who will be eligible for the following year's CFL Draft. The East–West Bowl is organized with the help of the Canadian University Football Coaches Association (CUFCA) and in partnership with the CFL, it brings together over 90 of the top U Sports football players for a week of practices and evaluation, culminating with the annual all-star game. A national committee of U Sports head coaches selects the participants from a pool of players nominated by their respective universities. Players who are generally in their 3rd year of eligibility are the prime candidates for nomination. Every U Sports football program is represented by a minimum of three and a maximum of four players who will be eligible for the CFL draft the following year. Each school submits a list of six players they nominate. A committee of U Sports coaches and CFL representatives review the nominations and determine who gets invited. 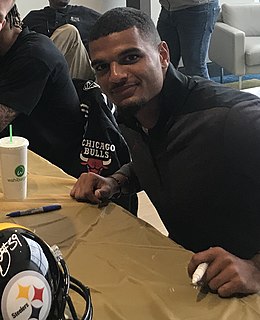 Minkah Fitzpatrick Jr. is an American football free safety for the Pittsburgh Steelers of the National Football League (NFL). He played college football at Alabama, and was drafted by the Miami Dolphins in the first round of the 2018 NFL Draft before being traded to the Steelers during the 2019 season.