In sprint football, players must maintain a weight of 178 lb or 81 kg or less and a minimum of 5% body fat to be eligible to play. The end result of these weight restrictions is that, unlike conventional collegiate football which places a premium on body weight and strength, sprint football emphasizes speed and agility. [3]

As of the 2022 season, nine schools play in the CSFL and six in the newly formed Midwest Sprint Football League. [4] Of the nine CSFL members, six are private universities (two being schools in the Ivy League) and two are national military academies. All six charter MSFL members are private institutions. CSFL member Mansfield University of Pennsylvania is the only state university or college currently playing sprint football.

All CSFL teams are located in the northeastern and mid-Atlantic United States. Seven schools joined in the 21st century, one in 2008 and the others in the 2010s; five remain active in sprint football today. Of these new members, two no longer sponsor the sport—Franklin Pierce University, which joined in 2012, transitioned to full-sized football in NCAA Division II after the 2018 season, [5] and Post University, which joined in 2010, did the same after the canceled 2020 season. [6] Of the 21st-century arrivals, only Alderson Broaddus University, also a Division II member, has a full-size varsity football team. The other four teams (all of which have been in the CSFL since 1957) have full-size football teams that compete in NCAA Division I—the service academies in FBS, and the Ivy League schools in FCS. Each team plays a seven-game season. [7] It is not uncommon for the CSFL teams to play against full-size junior varsity or club football squads from other schools in the early part of the season (in 2015, for instance, Navy faced the Longwood Lancers). In addition, Army, Cornell, Princeton, and Penn all hold alumni games in which sprint football alumni return to campus for a full-contact scrimmage against the varsity squad. The alumni games serve the dual purpose of raising funds to support the team and maintaining alumni interest in the program. [8] Typically, the alumni have to donate a monetary weight penalty (e.g., $2 per pound) for weighing above the 178-pound limit. [9] In 2017, when Caldwell joined, the CSFL was split into two divisions, the North and the South. On December 7, 2017, St. Thomas Aquinas College was announced as the tenth team in the league, to begin play in the 2018 season. [2] After that season, Franklin Pierce left to play full-sized football and was replaced by Alderson Broaddus. [10]

As of 2022, only one charter member of the league remains, the Penn Quakers. The Princeton Tigers dropped the sport after 2015, following 16 consecutive years of winless seasons (an organized football record) and changes in league membership, and shifted its resources to club football. [11] A number of other Ivy League schools have historically had sprint football teams, including the Yale Bulldogs, Harvard Crimson, and Columbia Lions, all of whom had dropped the sport many years earlier; of the Ivy League schools, only Penn and the Cornell Big Red remain.

For its first 83 seasons, the CSFL did not sponsor playoff or bowl games (a tradition due in no small part to the Ivy League schools, who, like the rest of the Ivy League, abstain from all football postseason play to encourage academic performance). The season championship was decided solely by the regular season record; if multiple teams were tied atop the standings, all of them shared the championship. Since Navy's and Army's respective admissions to the league, those two schools have dominated the league; of the 72 seasons of lightweight football since Navy joined, they and/or Army have won at least a share of the league title in 64 of them, including stretches of 20 consecutive seasons from 1955–74 and 17 straight from 1983–99. Since the 2017 season, a championship game has been held on Veterans Day weekend.

Although CSFL and MSFL teams are considered varsity teams and official school-sponsored sports for the purpose of the NCAA, sprint football teams do not fall into the same divisional structure as other NCAA sports and thus do not follow the same rules or restrictions on athletic scholarships as traditional college football squads are bound to follow.

In April 2020, the CSFL chose Dan Mara, also Commissioner of the Central Atlantic Collegiate Conference (CACC) as Commissioner. In July of that year, the league voted to not play a fall 2020 season out of concern over the COVID-19 pandemic, over the objections of Army and Navy, who indicated an intent to continue play without the other eight teams. [12] In addition to a single Army-Navy game in the fall, Caldwell and St. Thomas Aquinas played a single game in spring 2021. The league resumed normal operations in fall 2021.

The MSFL was formed in 2021, with play set to start in 2022, by six private institutions in the Midwest and Upper South. The league will have its own bylaws and championship, but will use the same weight limits as the CSFL. The creation of the MSFL was touted as "the largest single-year expansion of the sport in nearly 90 years." Of the inaugural members, all are Catholic except for Midway University. Only Bellarmine University is an NCAA Division I member (it is currently transitioning from NCAA Division II). Quincy University, a Division II member, is the only MSFL member that also plays full-sized football. Another member is NCAA Division III and the other three are NAIA members. [4]

CSFL rules require that players must weigh no more than 178 pounds (81 kg), a figure that has slowly increased from its original 150 pounds (68 kg) as the weight of the American college student has increased over the course of the league's existence. [3] League rules specify official weigh-ins four days and two days before each game. Players must weigh 178lbs (82.6 kg) four days and 2 days prior to game day. Players are allowed to gain weight back after meeting the weight limit [7]

Alderson Broaddus University (AB) is a private university in Philippi, West Virginia. It was formed in 1932 as Alderson–Broaddus College by the union of two Baptist institutions: Alderson Academy and Broaddus Institute. The school adopted its current name in 2013.

Rowing is the oldest intercollegiate sport in the United States. The first intercollegiate race was a contest between Yale and Harvard in 1852. In the 2018–19 school year, there were 2,340 male and 7,294 female collegiate rowers in Divisions I, II and III, according to the NCAA. The sport has grown since the first NCAA statistics were compiled for the 1981–82 school year, which reflected 2,053 male and 1,187 female collegiate rowers in the three divisions. Some concern has been raised that some recent female numbers are inflated by non-competing novices.

The Dartmouth College Big Green are the varsity and club athletic teams representing Dartmouth College, an American university located in Hanover, New Hampshire. Dartmouth's teams compete at the National Collegiate Athletic Association (NCAA) Division I level as a member of the Ivy League conference, as well as in the ECAC Hockey conference. The College offers 34 varsity teams, 17 club sports, and 24 intramural teams. Sports teams are heavily ingrained in the culture of the College and serve as a social outlet, with 75% of the student body participating in some form of athletics.

The Cornell Big Red football team represents Cornell University in National Collegiate Athletic Association (NCAA) Division I Football Championship Subdivision (FCS) college football competition as a member of the Ivy League. It is one of the oldest and most storied football programs in the nation. The team has attained five national championships and has had seven players inducted into the College Football Hall of Fame.

The Cornell Big Red men's basketball team represents Cornell University, located in Ithaca, New York, in NCAA Division I men's competition. The Big Red's appearance in the 2008 NCAA Tournament was their first trip to "The Big Dance" since 1988. On March 14, 2016, Cornell did not renew the contract of head coach Bill Courtney, who was hired after the 2009–10 season. On April 18, 2016 Brian Earl was named the 22nd head coach in the program's history. 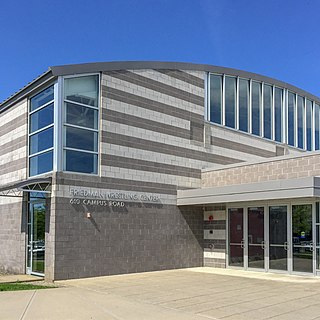 The Cornell Big Red wrestling team represents Cornell University of Ithaca, New York. In 2021, two-time NCAA All-American and former Big Red wrestler Mike Grey took over for Rob Koll, who left for Stanford after 28 years as head coach. Koll has led the team to eight top-five finishes in the NCAA Division I wrestling tournament, including second-place finishes in 2010 and 2011. The 2010 and 2011 finishes were the best ever for an Ivy League team. In 2012, Cornell wrestling finished fourth in the NCAA tournament, while crowning three individual national champions Kyle Dake (157 lbs), Steve Bosak (184 lbs) and Cam Simaz (197 lbs). This was the first time in program history when there were multiple national champions (3) in the same year. Additionally, Kyle Dake went on to become the only wrestler in U.S. history to capture four individual national championships in different weight classes, Outside of the NCAA tournament, Cornell has been Ivy League champion a record 40 times and was league champion for 17 consecutive seasons between 2003 and 2019. During that streak the team won 92 consecutive Ivy League dual meets. Cornell has won the Eastern Intercollegiate Wrestling Association championship 26 times including 11 consecutive titles between 2007 and 2017. These streaks remain the longest in wrestling history for their respective divisions.

The 2018 Dartmouth Big Green football team represented Dartmouth College in the 2018 NCAA Division I FCS football season as a member of the Ivy League. The Big Green were led by head coach Buddy Teevens in his 14th straight year and 19th overall. They played their home games at Memorial Field. They finished the season 9–1 overall and 6–1 in Ivy League play to place second.