Throwball is a non-contact ball sport played across a net between two teams of nine players on a rectangular court. It is popular in Asia, especially on the Indian subcontinent, and was first played in India as a women's sport in Chennai during the 1940s. Like volleyball, the game's roots are linked with the YMCA. Both volleyball and newcomb ball, while older games, share many similarities with throwball. Throwball rules were first drafted in 1955 and India's first national level championship was played in 1980.

According to the Throwball Federation of India, throwball is thought to have been drawn from a recreational sport popular among women in England and Australia during the 1930s.[ citation needed ] The YMCA brought the game to Chennai, where it was played as a women's sport in the 1940s.[ citation needed ] Harry Crowe Buck, who had founded the YMCA College of Physical Education in Chennai, drafted guidelines for throwball rules and regulations in 1955. The game reached Bangalore in the 1950s. [1]

Throwball Federation of India (TFI) was formed along with the Indian National Throwball Championship. By 1990 throwball in India had become a sport for both men and women.

The playing court is somewhat larger than a volleyball court at 12.20 by 18.30 metres (40.03 ft × 60.04 ft) with a neutral box 1 metre (3 ft 3.37 in) on either side of the centre. The height of the net is 2.2 metres (7.22 ft). The ball is similar to a volleyball but may be slightly larger. While in volleyball the ball is hit or volleyed throughout play, in throwball the ball is thrown over the net, where a member of the other team tries to catch the ball and quickly throw it back across the net.

An official game is played between two teams of nine or seven players. A minimum of three or five substitute players are allowed for each team, which can make a maximum of three substitutions during a set. A team can take two time-outs of 30 seconds each during a set. The first team to score 25 points wins a set. A match is three sets.

Service is within five seconds after the referee whistles and is done from the service zone, without crossing the end line. A player can jump while serving the ball. The service ball must not touch the net. Double touch is not allowed for receiving the service ball and players stay in3-3-3 position during the serve.

During a rally, the ball must be caught at once with both hands, without any movement of the ball within the hands (dubs) and the player shouldn't have contact with the ground. Two players are not allowed to catch the ball simultaneously. The ball is thrown within three seconds after being caught, only from above the shoulder-line and only with one hand. A player can jump when throwing the ball, which can touch the net (but not the antenna). The player should have contact with the ground when catching the ball. However, the ball is not touched with any part of the body other than the palm when catching or throwing (body touch). The ball can neither be shifted (passed) to the left or right, nor deliberately pushed.

In official play, teams wear shorts and jersey uniform with numbers only in the range of 1–12 printed front and back. [2]

In India, the National Throwball Championship is organized by the Throwball Federation of India. [3]

Futsal is a ball sport played on a hard court, smaller than a football pitch, and mainly indoors. It has similarities to five-a-side football.

Sepak takraw, or kick volleyball, is a sport native to Southeast Asia. Sepak takraw differs from the similar sport of footvolley in its use of a rattan ball and only allowing players to use their feet, knee, chest and head to touch the ball. 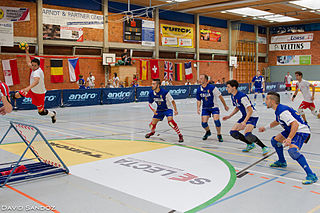 Tchoukball is an indoor team sport developed in the 1970s by Swiss biologist Dr Hermann Brandt. Dr Brandt was concerned about the number of injuries in sport at the time and as part of an educational study he wanted to create a sport that reduced injuries, was not aggressive between players and enabled people of all shapes, sizes, genders, cultures, and backgrounds to play together.

Wallyball is a fast-paced sport that is volleyball played in a racquetball court, where it is legal to hit the ball off of the walls. 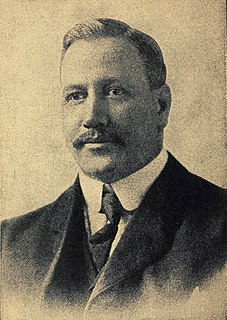 William George Morgan was the inventor of volleyball, originally called "Mintonette", a name derived from the game of badminton which he later agreed to change to better reflect the nature of the sport. He was born in Lockport, New York, U.S.A. 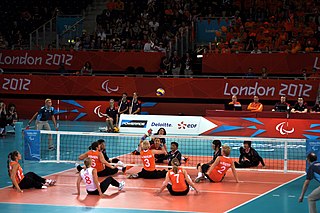 Sitting volleyball is a form of volleyball for athletes with a disability.

Several sports related to volleyball have become popular. Beach volleyball is an event at the Olympics, and sitting volleyball at the Paralympics. Other varieties are localised, or are played at an amateur or informal level.no head is allowed