Last updated August 28, 2022
Variant of volleyball where the players sit on the floor

In sitting volleyball, a 7-metre-long (23 ft), 0.8-metre-wide (2 ft 7 in) net is set at 1.15 metres (3.8 feet) high for men and 1.05 metres (3.4 feet) high for women. The court is 10 by 6 metres (33 by 20 feet) meters with a 2-metre (6.6-foot) attack line. The rules are the same as the original form of volleyball with the exceptions that players must have at least one buttock in contact with the floor whenever they make contact with the ball and it is also possible to block the serve. [6] [ self-published source ] [3] Athletes with the following disabilities are eligible to compete in sitting volleyball: athletes with amputations, spinal cord injuries, cerebral palsy, brain injuries and stroke. Classifications of these athletes by disability are placed into two categories: MD and D. MD stands for "Minimally Disabled," and D stands for “Disabled.” While Minimally Disabled athletes have lost only a fraction of their muscular strength and flexibility in a joint preventing them from successfully playing standing volleyball, Disabled athletes have lost all of their muscular strength and flexibility in that joint. Only two MD players are allowed on the roster for the Paralympic Games and only one is allowed on the court at a time; this is to keep the competition fair between rival teams. The rest of the team must be classified as D players. [3] [7] Skills are largely identical to the sport of volleyball and the following game terminology apply: 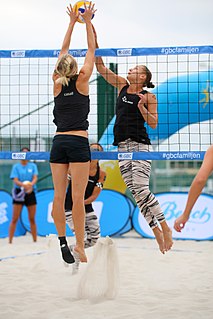 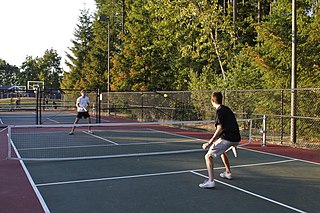 Pickleball is an indoor or outdoor racket/paddle sport where two players (singles), or four players (doubles), hit a perforated hollow polymer ball over a 36-inch-high (0.91 m) net using solid faced paddles. The two sides hit the ball back and forth over the net until one side commits a rule infraction. Pickleball was invented in 1965 as a children's backyard game on Bainbridge Island, Washington, USA. In 2022 pickleball was adopted as the official state sport of Washington.

A drop shot is a shot in some racket sports in which the ball is hit relatively softly, sometimes with topspin or backspin, so that it lands just over and close to the net. A well-placed and well-timed drop shot will make it difficult for the opposing player to hit an aggressive or offensive shot in return. The most successful drop shots will not allow the opponent to hit the ball back at all. 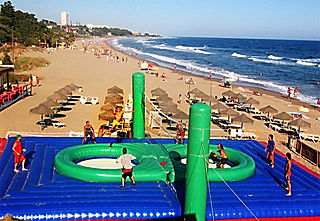 Bossaball is a team sport that originated in Brazil and was conceptualised by Belgian Filip Eyckmans in 2005. Bossaball is a ball game between two teams, combining elements of volleyball, football and gymnastics with music into a sport. It is played on an inflatable court featuring a trampoline on each side of the net. The trampolines allow the players to bounce high enough to spike the ball over the net.

Volleyball at the 2008 Summer Paralympics was held in the China Agricultural University Gymnasium from 7 September to 15 September. Two sitting volleyball team events were held, one for men and one for women.

Volleyball at the 2012 Summer Paralympics was held from 30 August to 8 September at the ExCeL Exhibition Centre in London. Two sitting volleyball team events were held, one for men and one for women. 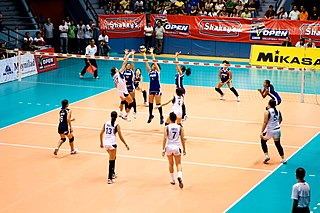 VolleySLIDE is the Sitting Volleyball world educational programme by World ParaVolley, the international federation responsible for all forms of ParaVolley. It is aimed at driving the development of the sport, in line with the Paralympic Movement and global society expectations. World ParaVolley (formerly known as World Organisation Volleyball for Disabled is a member of International Paralympic Committee and adopted VolleySLIDE back in February 2014.

Volleyball at the 2016 Summer Paralympics was held from 9 September to 18 September at the Riocentro Pavilion 6 in Rio de Janeiro. Two sitting volleyball team events were held, one for men and one for women.

This glossary provides definitions and context for terminology related to, and jargon specific to, the sport of pickleball. Words or phrases in italics can be found on the list in their respective alphabetic sections.

Wikimedia Commons has media related to Sitting volleyball .
This page is based on this Wikipedia article
Text is available under the CC BY-SA 4.0 license; additional terms may apply.
Images, videos and audio are available under their respective licenses.