Yacht racing is a sailing sport involving sailing yachts and larger sailboats, as distinguished from dinghy racing, which involves open boats. It is composed of multiple yachts, in direct competition, racing around a course marked by buoys or other fixed navigational devices or racing longer distances across open water from point-to-point. It can involve a series of races when buoy racing or multiple legs when point-to-point racing.

Yachting, that is, recreational boating, is very old, as exemplified in the ancient poem Catullus 4:

The yacht you see there, friends, says that she's been The fastest piece of timber ever seen; She swears that once she could have overhauled All rival boats, whether the challenge called For racing under canvas or with oars.

"Yacht" is referred to as deriving from either Norwegian ("jagt"), Middle Low German ("jaght") or from the Dutch word jacht, which means "a swift light vessel of war, commerce or pleasure. The sporting element in the word lies in the derivation of jaght from the root jaghen, which means to hunt, chase or pursue…." [1] [2]

The formal racing of boats is believed to have started with sailboats in the Netherlands sometime in the 17th century. Soon, in England, custom-built racing "yachts" began to emerge and the Royal Yacht Squadron was established in 1815. In 1661 John Evelyn recorded a competition between Katherine and Anne, two large royal sailing vessels both of English design, "…the wager 100-1; the race from Greenwich to Gravesend and back." [3] One of the vessels was owned, and sometimes steered, by Charles II, the King of England. The king lost.

In 1782, the Cumberland Fleet, a class of sailing vessel known for its ability to sail close to the wind, were painted racing up the Thames River with spectators viewing from a bridge. [4] Much like today, this obsession with sailing close to the wind with speed and efficiency fueled the racing community.

In the 19th century, most yacht races were started by allotting starting positions to the competitors. Buoys were laid in a straight line, to which the competitors attached their yachts by means of spring ropes. The yachts were required to keep all the sails forward of the mainmast on deck until the starting signal was given. [5] The Yacht Racing Association was founded in 1875 by Prince Batthyany-Strattman, Captain J. W. Hughes, and Mr. Dixon Kemp. [6] The Y.R.A. wrote standardised yacht racing rules which included the 'Flying Start' used today. [7]

Bringing yacht racing to the forefront of public life, the America's Cup was first raced in 1851 between the New York Yacht Club and the Royal Yacht Squadron. Not ruled or regulated by measurement criteria as today, it is the second-place finisher was Aurora, "and but for the fact that time allowance had been waived for the race she would have been the winner by a handsome margin." [8] Subsequently, the Cup races were conducted, usually every three to four years, based on a challenge issued by one club to the current Cup holder, which till 1983 was the NYYC.

As yacht racing became more prevalent, and yacht design more diverse, it was necessary to establish systems of measurements and time allowances due to the differences in boat design. Longer yachts are inherently faster than shorter ones; therefore, in the interests of fairness, in the 1820s a “primitive system of time allowance was introduced on the Solent.” [12] Larger yachts were handicapped; but owners with the biggest vessels had a problem with the allowance system, for they preferred that crossing the finish line first, much as in foot and horse races, should suffice to win the contest. As a result, both ratings and “one-design” competition were developed.

Ratings systems rely upon some formulaic analysis of usually very specific yacht-design parameters such as length, sail area, displacement, and hull shape. During the 1920s and through the 1970s the Cruising Club of America established a formula by which most racing/cruising boats were designed during that period. After its descendant, the mathematically complex International Offshore Rule (IOR) of the 1970s, contributed to much decreased seaworthiness (and even speed), the simpler Performance Handicap Racing Fleet (PHRF) [13] system was adopted. The PHRF uses only proven performance characteristics, especially theoretical sailing speed, as a means to allow dissimilar yachts—typically crewed by friends and families at clubs rather than by professional crews—to race together. Most popular family-oriented cruising sailboats will have a rating filed with a local chapter of the PHRF.

The most prevalent handicap rating systems today are the Offshore Racing Congress (ORC), Offshore Racing Rule (ORR), [14] International Rating Certificate (IRC), and the Performance Handicap Racing Fleet (PHRF). [15] Many countries organise their own handicap systems which do not take into account the size, weight, or sail area of the yacht, but performance is measured on the basis of previous race results. The Irish E.C.H.O. system is such a handicap system. [16]

One-design racing was invented by Thomas (Ben) Middleton in 1886 in Killiney Bay close to Dublin City, Republic of Ireland. Middleton was concerned that winning a yacht race was more reliant on having an expensive new yacht, than it was on the skill of the yachtsman. [17] One design yacht racing is conducted with classes of similar boats, all built—often via mass-production—to the same design, with the same sail area and rig, and the same number of crew, so that crew ability and tactical expertise are more likely to decide a race than boat type, or age, or even weather. Popular racing boats such as The Water Wag, Laser, the J/22 and J/24, the Etchells, and the Star and New York 30 of Nathanael Herreshoff are examples of one-design boats.

In general, modern yacht-racing contests are conducted according to the Racing Rules of Sailing, [18] first established in 1928. [19] Though complex, the RRS are intended primarily simply ensure fairness and safety. The Rules are revised and updated every four years by the body now known as World Sailing.

The major races of today can be classified as offshore, ocean, around the world, and inshore racing all adhering to one set of rule, but diverse handicapping standards. [20] 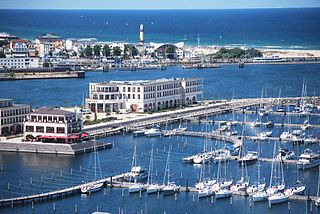 A maxi yacht usually refers to a racing yacht of at least 70 feet (21 m) in length. 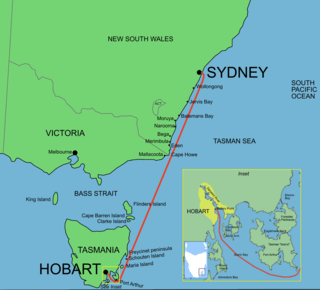 The Rolex Sydney Hobart Yacht Race is an annual event hosted by the Cruising Yacht Club of Australia, starting in Sydney, New South Wales on Boxing Day and finishing in Hobart, Tasmania. The race distance is approximately 630 nautical miles (1,170 km). The race is run in conjunction with the Royal Yacht Club of Tasmania, and is widely considered to be one of the most difficult yacht races in the world.

One-Design is a racing method which may be adopted in sports which use complex equipment, whereby all vehicles have identical or very similar designs or models.

The Marblehead to Halifax Ocean Race (MHOR) is a biennial sailing race which celebrated its 100th anniversary in 2005. It runs between Marblehead, Massachusetts and Halifax, Nova Scotia. It is believed to be the longest running offshore ocean race in the world and is considered one of the pre-eminent ocean races of the North Atlantic.

Performance Handicap Racing Fleet (PHRF) is a handicapping system used for yacht racing in North America. It allows dissimilar classes of sailboats to be raced against each other. The aim is to cancel out the inherent advantages and disadvantages of each class of boats, so that results reflect crew skill rather than equipment superiority. 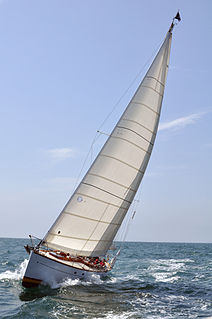 The Launceston to Hobart yacht race is a 285 nautical mile race, commencing at Beauty Point on the Tamar River, with competitors sailing out of the Tamar River, east along the northern coast of Tasmania, through Banks Strait and south down Tasmania's East Coast, through Mercury Passage between mainland Tasmania and Maria Island, across Storm Bay, to a finish line in the Derwent River. The race departs on 27 December each year. The race is known as the L2H race despite the race commencing at Beauty Point, some 45 kilometers north of Launceston.

The Marion to Bermuda Cruising Yacht Race is a biennial yacht race held in odd-numbered years, from Marion, Massachusetts to the island of Bermuda, a distance of 645 nautical miles (1,195 km). The most recent race was held starting June 9, 2017. 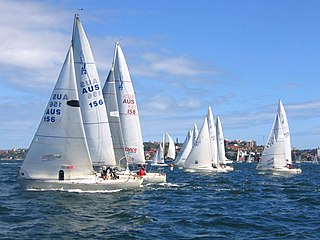 Captain John Holden Illingworth was an English naval engineer in the Royal Navy who achieved fame as a yacht racer and yacht designer. Described on his death as "the father of post-war offshore sailing racing", he held most of the senior positions in British yachting and pioneered several innovations in the sport.

Handicap forms for sailing vessels in sailing races have varied throughout history, and they also vary by country, and by sailing organisation. Sailing handicap standards exist internationally, nationally, and within individual sailing clubs. 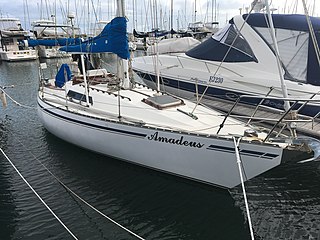 UFO 34 is a cruising and racing fibreglass monohull sailboat class. It is a sloop based on a design by Holman and Pye. The design features a spade rudder and a Bermuda rig with a large, overlapping headsail. Over 150 UFO 34s have been built both in the United Kingdom and Australia. 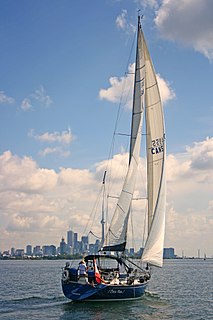 The C&C 37/40 is a Canadian 12.05 metres (39.5 ft) LOA fibreglass monohull sailing yacht, designed in 1988 by Robert W. Ball of Cuthbertson & Cassian as a replacement for the earlier C&C 37 dating from 1981. The C&C 37/40 is a recreational keelboat of moderate displacement, intended as a cruiser/racer or oceangoing racer. The yachts have a masthead sloop rig, with a fin keel and an internally-mounted spade-type rudder. Over 110 of the 37/40 type were built before the Canadian plant closed in 1994. The design is no longer produced.

Route Halifax Saint-Pierre Ocean Race is an ocean race held in late June or early July, every two years, from Halifax, Nova Scotia, Canada for a distance of approximately 350 nautical miles (650 km) to Saint-Pierre, in the French Archipelago of Saint-Pierre et Miquelon off of coastal Newfoundland. It is raced by crews of two or more people, most commonly in sailboats in the 30 to 40 foot range, but boats from 21 feet (6.4 m) to 60 feet (18 m) have been raced in the past.