Bodysurfing is the art and sport of riding a wave without the assistance of any buoyant device such as a surfboard or bodyboard. Bodysurfers often equip themselves with a pair of swimfins that aid propulsion and help the bodysurfer catch, ride and kick out of waves. Some bodysurfers also use a wooden or foam handplane, which helps to get one's chest out of the water to reduce drag.

Some of the best waves for bodysurfing are steep, fast, tubing beachbreak waves that are often unsuitable for boardsurfing; two of the best known are Sandy Beach and Makapuu on the east shore of Oahu in Hawaii. The Wedge, in Newport Beach, California, a ferocious sand-pounding peak wave aptly described by Sports Illustrated in 1971 as "a great big screaming shorebreak," has for decades been bodysurfing's most fearsome and famous break. Other regions with world-class bodysurfing waves include Hossegor (France), Puerto Escondido (Mexico), and Nazaré (Portugal).

Bodysurfing predates board-surfing, which itself, University of Hawaii anthropologist Ben Finney suggests, may date as far back as 2000 B.C. Recorded bodysurfing history, however, begins after that of board-surfing. In 1899, Australian Fred Williams was taught to bodysurf by Tommy Tanna, a Polynesian islander brought to Sydney to work as a gardener; Williams in turn taught local "surf-bathers" how to ride waves. [2]

Bodysurfing was first popularized in the United States during the mid-'20s by Olympic swimmer Wally O'Conner of Los Angeles, who visited local beaches and drew audiences by diving underwater while facing an incoming wave, do a push-turn off the sand, then burst out of the shore-bound white water. (USC football player Marion Morrison, an early California bodysurfer, tore ligaments in his shoulder while riding the surf near Balboa Pier in 1926; finished with organized sports, Morrison made his way to Hollywood and was renamed John Wayne).

In 1931, Los Angeles bodysurfer Ron Drummond published The Art of Wave-Riding, a 26-page primer on bodysurfing basics, and the first book of any kind on surfing. California surfer Owen Churchill visited Hawaii the following year and noticed that locals were able to increase the power of their kick stroke—and therefore catch waves easier—after fixing palm fronds to their feet with tar. Churchill kept the idea in the back of his mind, and in 1940 introduced what would become a bodysurfing equipment standard: the Churchill "Duck Feet" swim fin. In another breakthrough, around the same time, Santa Monica lifeguard Cal Porter taught himself how to ride at an angle across the wave face rather than straight to the beach.

Tens of thousands of coast-dwelling Americans had by that time taken to waves. A bodysurfing article published in 1940 by Life magazine, "Surf-Riding is a Favorite Summertime Sport," noted that "almost every boy and girl [in California] is an expert surf-rider." Board-surfing, mat-riding, and bodyboarding would all become popular in the years and decades to come — and gain far more attention — but bodysurfing, practiced mostly by tourists and day visitors during the warmer months, has always remained the most popular form of wave-riding.

Bodysurfing has no organized contest circuits or leagues, or a definitive world championship. A limited number of individual contests, however, have long been attended by a small international cadre of full-time bodysurfers. Two of the biggest events, both founded in 1977, are the Oceanside World Bodysurfing Championship, held in midsummer, and the Pipeline Bodysurfing Classic, usually held in January. The Pipeline Classic, long regarded as the sport's most prestigious contest, became the first professional bodysurfing contest in 1980, but soon returned to amateur status after organizers were unable to find sponsors. [3]

The First Ever: In the 1988 and 1989 ocean city competition the first ever back to back competitor Greg Carll won both competitions by a land slide. his plaque used to be placed at the far end of the beach, till it was taken down to let new comers have the spot.

Wikiversity has learning resources about Bodysurfing 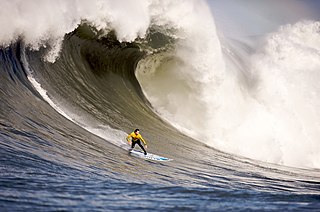 Bodyboarding is a water sport in which the surfer rides a bodyboard on the crest, face, and curl of a wave which is carrying the surfer towards the shore. Bodyboarding is also referred to as Boogieboarding due to the invention of the "Boogie Board" by Tom Morey in 1971. The average bodyboard consists of a short, rectangular piece of hydrodynamic foam. Bodyboarders typically use swim fins for additional propulsion and control while riding a breaking wave. 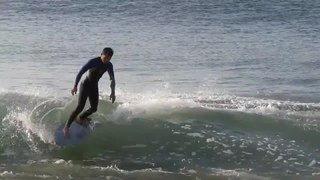 Skimboarding or skimming is a boardsport in which a skimboard is used to glide across the water's surface to meet an incoming breaking wave, and ride it back to shore. Wave-riding skimboarders perform a variety of surface and air maneuvers, at various stages of their ride, out to, and back with, the wave. Some of these are known as "wraps", "big spins", "360 shove-its" and "180s". Unlike surfing, skimboarding begins on the beach by dropping the board onto the thin wash of previous waves. Skimboarders use their momentum to skim out to breaking waves, which they then catch back into shore in a manner similar to surfing. 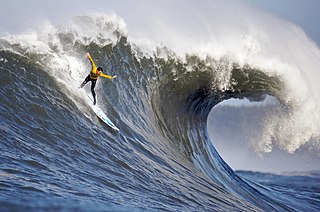 Mike Stewart is a nine-time World Champion bodyboarder, one of the early pioneers of the bodyboarding sport, a pioneer of big-wave tow-in surfing and also a champion bodysurfer. 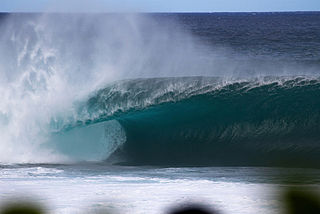 The Banzai Pipeline, or simply Pipeline or Pipe, is a surf reef break located in Hawaii, off Ehukai Beach Park in Pupukea on O'ahu's North Shore. A reef break is an area in the ocean where waves start to break once they reach the shallows of a reef. Pipeline is known for huge waves that break in shallow water just above a sharp and cavernous reef, forming large, hollow, thick curls of water that surfers can tube ride. There are three reefs at Pipeline in progressively deeper water farther out to sea that activate according to the increasing size of approaching ocean swells.

Hoʻokipa is a beach on the north shore of Maui, Hawaii, United States, perhaps the most renowned windsurfing site in the world. A combination of large, well-shaped waves breaking across a system of reefs that extend across the bay and consistently strong winds make it ideal for the sport.

Greg Noll was an American pioneer of big wave surfing and a prominent longboard shaper. Nicknamed "Da Bull" by Phil Edwards in reference to his physique and way of charging down the face of a wave, he was on the U.S. lifeguard team that introduced Malibu boards to Australia around the time of the 1956 Summer Olympics in Melbourne. He produced a "legendary" series of five Search for Surf films. 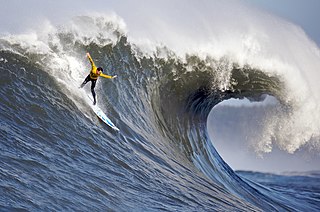 Surf culture includes the people, language, fashion, and lifestyle surrounding the sport of surfing. The history of surfing began with the ancient Polynesians. That initial culture directly influenced modern surfing, which began to flourish and evolve in the early 20th century, with its popularity peaking during the 1950s and 1960s. It has affected music, fashion, literature, film, art, and youth jargon in popular culture. The number of surfers throughout the world continues to increase as the culture spreads.

The Pipeline Bodysurfing Classic (PBC) is a bodysurfing competition held annually during the winter season at the Banzai Pipeline on the North Shore of the island of Oahu in Hawaii.

Charles M. Van Artsdalen was a surfer. He moved to La Jolla, California, from his birthplace of Norfolk, Virginia, at age 14. Van Artsdalen is best known as a pioneer of surfing 25-foot waves at such North Shore locations as Waimea Bay and Sunset Beach; and tube riding in Hawaii during the early 1960-1970s. A member of the Duke Kahanamoku Surf Team, he appeared in several surf movies and remained a fixture of the international surfing community until his death from alcohol-related illness in 1979.

Surfing is a surface water sport in which the rider, referred to as a surfer, rides on the forward or deep face of a moving wave. Related activities include:

The riding of waves has likely existed since humans began swimming in the ocean. In this sense, bodysurfing is the oldest type of wave-catching. Archaeological evidence suggests that ancient cultures of Peru surfed on reed watercraft for fishing and recreation up to five thousand years ago. Standing up on what is now called a surfboard is a relatively recent innovation developed by the Polynesians. The influences for modern surfing can be directly traced to the surfers of pre-contact Hawaii.

Phyllis O'Donnell is an Australian surfer who became the first Women's World Surfing Champion. O'Donnell won the championship in 1964 at the age of 27. At the time, surfing was dominated by men, and her championship was regarded as a step forward for women's recognition in the sport. O'Donnell also won the women's division of the Australian National Titles in 1963, 1964, and 1965.

Terry Wade is an American bodysurfer.

Dog surfing is a type of surfing maneuver involving dogs that are trained to surf on surfboards, bodyboards, skimboards, windsurf boards or to bodysurf. Historically, surfing dogs have been documented as occurring as early as the 1920s in the United States. Competitions and exhibitions that feature surfing dogs have occurred in various coastal areas of the United States, such as Del Mar, California, Imperial Beach, California and Jupiter, Florida. 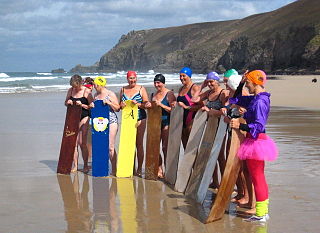 Bellyboarding is a surface water sport in which the surfer rides a bodyboard on the crest, face, and curl of a wave which is carrying the surfer towards the shore.

Wikimedia Commons has media related to Bodysurfing .
This page is based on this Wikipedia article
Text is available under the CC BY-SA 4.0 license; additional terms may apply.
Images, videos and audio are available under their respective licenses.