Wheelchair rugby (originally murderball, and known as quad rugby in the United States) is a team sport for athletes with a disability. It is practised in over twenty-five countries around the world and is a summer Paralympic sport.

The US name is based on the requirement that all wheelchair rugby players need to have disabilities that include at least some loss of function in at least three limbs. Although most have spinal cord injuries, players may also qualify through multiple amputations, neurological disorders or other medical conditions. Players are assigned a functional level in points, and each team is limited to fielding a team with a total of eight points.

Wheelchair rugby is played indoors on a hardwood court, and physical contact between wheelchairs is an integral part of the game. The rules include elements from wheelchair basketball, ice hockey, handball and rugby union.

The sport is governed by the International Wheelchair Rugby Federation (IWRF) which was established in 1993.

Wheelchair rugby was created to be a sport for persons with quadriplegia in 1976 by five Canadian wheelchair athletes, Gerry Terwin, Duncan Campbell, Randy Dueck, Paul LeJeune and Chris Sargent, in Winnipeg, Manitoba. [1]

At that time, wheelchair basketball was the most common team sport for wheelchair users. That sport's physical requirement for players to dribble and shoot baskets relegated quadriplegic athletes, with functional impairments to both their upper limbs and lower limbs, to supporting roles. The new sport—originally called murderball due to its aggressive, full-contact nature—was designed to allow quadriplegic athletes with a wide range of functional ability levels to play integral offensive and defensive roles.

Murderball was first introduced into Australia in 1982.[ citation needed ] The Australian team competing in the Stoke Mandeville games in England were invited by the Canadians to select a team to play them in a demonstration game. After receiving limited instructions on the rules and skills of the game the "contest" began. Following a fast and very competitive exchange, Australia won. The game was then born and brought back to Australia where it has flourished.

Murderball was introduced to the United States in 1979 [2] by Brad Mikkelsen. With the aid of the University of North Dakota's Disabled Student Services, he formed the first American team, the Wallbangers. The first North American competition was held in 1982.

The sport has had full medal status since the 2000 Summer Paralympics in Sydney, Australia, and there are now twenty-five active countries in international competition, with several others developing the sport.

Wheelchair rugby is mostly played by two teams of up to twelve players. Only four players from each team may be on the court at any time. It is a mixed-gender sport, and both male and female athletes play on the same teams.

Wheelchair rugby is played indoors on a hardwood court of the same measurements as a regulation basketball court—28 metres long by 15 metres wide. The required court markings are a centre line and circle, and a key area measuring 8 metres wide by 1.75 metres deep at each end of the court.

A team is not allowed to have more than three players in their own key while they are defending their goal line. Offensive players are not permitted to remain in the opposing team's key for more than ten seconds.

A player with possession of the ball must bounce or pass the ball within ten seconds.

Fouls are penalized by either a one-minute penalty, for defensive fouls and technical fouls, or a loss of possession, for offensive fouls. In some cases, a penalty goal may be awarded in lieu of a penalty. Common fouls include spinning (striking an opponent's wheelchair behind the main axle, causing it to spin horizontally or vertically), illegal use of hands or reaching in (striking an opponent with the arms or hands), and holding (holding or obstructing an opponent by grasping with the hands or arms, or falling onto them).

Wheelchair rugby games consist of four eight-minute quarters. If the game is tied at the end of regulation play, three-minute overtime periods are played.

Much like able-bodied rugby matches, highly competitive wheelchair rugby games are fluid and fast-moving, with possession switching back and forth between the teams while play continues. The game clock is stopped when a goal is scored or in the event of a violation—such as the ball being played out of bounds—or a foul. Players may only be substituted during a stoppage in play.

Goals (see above under Rules) are sometimes called "tries". [4]

New players and players in developing countries sometimes play in wheelchairs that have been adapted for wheelchair rugby by the addition of temporary bumpers and wings.

Wheelchair rugby uses a regulation volleyball typically of a 'soft-touch' design, with a slightly textured surface to provide a better grip. The balls are normally over-inflated compared to volleyball, to provide a better bounce. The official ball of the sport from 2013–2016 is the Molten soft-touch volleyball, model number WR58X. [5] Players use a variety of other personal equipment, such as gloves and applied adhesives to assist with ball handling due to their usually impaired gripping ability, and various forms of strapping to maintain a good seating position.

To be eligible to play wheelchair rugby, athletes must have some form of disability with a loss of function in both the upper limbs and lower limbs. [6] The majority of wheelchair rugby athletes have spinal cord injuries at the level of their cervical vertebrae. Other eligible players have multiple amputations, polio, or neurological disorders such as cerebral palsy, some forms of muscular dystrophy, or Guillain–Barré syndrome, among other medical conditions.

Players are classified according to their functional level and assigned a point value ranging from 0.5 (the lowest functional level) to 3.5 (the highest). The total classification value of all players on the court for a team at one time cannot exceed eight points.

The classification process begins with an assessment of the athlete's level of disability to determine if the minimum eligibility requirements for wheelchair rugby are met. These require that an athlete have a neurological disability that involves at least three limbs, or a non-neurological disability that involves all four limbs. The athlete then completes a series of muscle tests designed to evaluate the strength and range of motion of the upper limbs and trunks. A classification can then be assigned to the athlete. Classification frequently includes subsequent observation of the athlete in competition to confirm that physical function in game situations reflects what was observed during muscle testing.

As of September 2015 [update] there are twenty-eight active countries playing wheelchair rugby, [7] divided into three zones:

Since 2000, it has been one of the sports of the Summer Paralympic Games.

In July 2022, the World Games in Birmingham, Alabama hosted six teams to compete: Japan, USA, Germany, Switzerland, Canada, and Great Britain. These games had been postponed from 2021 due to the Covid-19 pandemic.

The paralympic version of wheelchair rugby has been adapted with new variations on the rules developed. These variations have broadened the classification system to allow players with higher functionality to compete.

Team size reduced from 12 to 10. Classifications in three categories:

A maximum of 8 points from 4 players can be played on court at any time.

The 5s version of wheelchair rugby was developed in the UK by Great Britain Wheelchair Rugby in 2017. [17] The game was officially adopted by IWRF in June 2021. [18] Like the Invictus variation, the 5s game widens eligibility. Team size remains at 12. Classifications in broad groups:

Wheelchair rugby was featured in the Oscar-nominated 2005 documentary Murderball . It was voted the #1 Top Sport Movie of all time by the movie review website Rotten Tomatoes. [20]

The character Jason Street in the NBC television show Friday Night Lights , having been paralyzed in a game of American football in the pilot, tries out for the United States quad rugby team in a later episode.[ citation needed ]

Wheelchair Rugby at the 2004 Summer Paralympics was staged at the Helliniko Indoor Arena from September 19 to September 25.

The Winter Paralympic Games is an international multi-sport event where athletes with physical disabilities compete in snow and ice sports. The event includes athletes with mobility impairments, amputations, blindness, and cerebral palsy. The Winter Paralympic Games are held every four years directly following the Winter Olympic Games and hosted in the same city. The International Paralympic Committee (IPC) oversees the Games. Medals are awarded in each event: with gold for first place, silver for second, and bronze for third, following the tradition that the Olympic Games began in 1904. 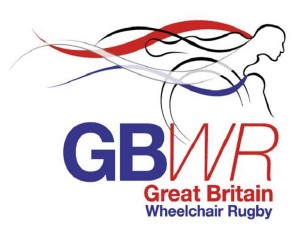 1 point player is a disability sport classification for wheelchair basketball. It is for people who have significant loss of trunk control. 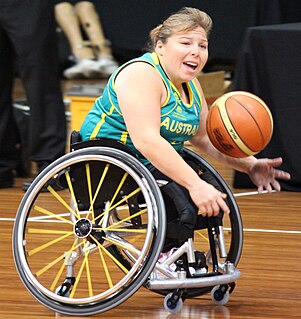 3 point player is a disability sport classification for wheelchair basketball. People in this class have good forward and backward trunk movement but poor to no sideways trunk movement. The class includes people with L2-L4 paraplegia and amputations. Amputees are put into this class generally if they have hip disarticulations or hip abductions. Players in this class can generally rebound balls that are over their heads, but they can have some issues with balance during lateral rebounds.

4 point player is a disability sport classification for wheelchair basketball. Players in this class have normal trunk function but have a reduced level of functioning in one or both of their lower limbs. They may have difficulty with sideways movements. People in this class include ISOD classified A1, A2 and A3 players. 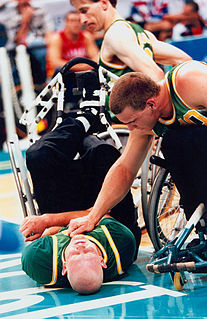 4.5 point player is a disability sport classification for wheelchair basketball. Players in this class tend to have normal trunk movement, few problems with side to side movements, and ability to reach to the side of their chair. Players generally have a below knee amputation, or some other partial single leg dysfunction. This classification is for players with minimal levels of disability. In some places, there is a class beyond this called 5 point player for players with no disabilities. 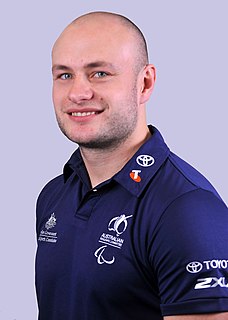 Christopher Adam Bond, is an Australian wheelchair rugby player. He has won gold medals at the 2012 London and 2016 Rio Paralympics and competed at the 2020 Summer Paralympics. 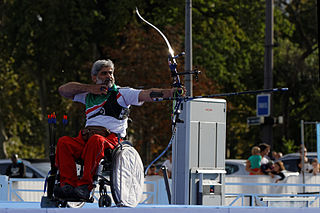 Wheelchair rugby classification is the seven class system that assigns players a point value based on functional mobility to insure parity in athletic ability on the court at any given time. Classification is handled by the International Wheelchair Rugby Federation.

Duncan Campbell, sometimes known as "the Quadfather", is a Canadian co-inventor of murderball. In the 1970s, Campbell invented the sport with four other Canadians before the sport was renamed to wheelchair rugby. In the sport, Campbell coached the Canadian team that went to the 2000 Summer Paralympics and organized the 2010 IWRF World Championship. Apart from wheelchair rugby, Campbell became a recreational therapist for the G. F. Strong Centre in 1986. His honours include an induction into the Canadian Paralympic Committee Hall of Fame in 2005 and receiving the Paralympic Order in 2013.