The rugby league playing field, [1] also referred to as a pitch [2] or paddock, is the playing surface for the sport of rugby league football and is surfaced exclusively with grass. [3]

The dimensions and markings of a full-sized playing area are defined in Section 1 of the Laws of the Game . [1] These Laws are the agreed upon and maintained by the Rugby League International Federation. The playing field is defined as "the area bounded by, but not including, the touch lines and dead ball lines" by Section 2. [4] If the ball or any player in possession of it makes contact with the touch lines or dead ball lines or the ground beyond them it is deemed to be out of play.

The rugby league field also has markings to denote where restarts, such as scrums, should be placed. [5]

The field of play is a fixed size – 100 m (110 yards) long and 68 m (74 yards) wide and does not include the line markings, meaning all touchlines and dead ball lines are considered out of play. [6]

Most play will occur within the field of play, this "is the area bounded by, but not including, the touch lines and goal lines". [7]

When the team in possession of the ball is attempting to score a try, the goal line is included in the in-goal area, grounding the ball correctly on either is a try. [8]

Between the goal lines, broken lines run parallel to each touch line at 10 and 20 m (11 and 22 yards) from touch. [1] Free kicks are taken 10 m (11 yards) in from the point where the ball entered touch after being kicked out to gain ground from a penalty. [7] If a scrum is required to restart play and the event that caused it occurred "within 20 metres of a touch line or ten metres of a goal line the scrum shall be brought in twenty metres from the touch line and ten metres from the goal line". [9]

Lines with distance markers transverse the field every 10 m (11 yards) perpendicular to the touch lines. [1] The distances ascend from each goal line towards the halfway line, which is marked "50" (similar to a typical American football field). [1] [10] These lines, as well as the goal lines, dead ball lines and touch lines are 15 cm (6 inches) wide and white in colour, [10] the only exception being the 40-metre (44-yard) lines, which are usually coloured red to distinguish them for the determination of 40–20 kicks in play.

On each goal line are two goal posts 5.5 m (18 feet) apart connected by a cross bar 3 m (9.8 feet) from the ground. [1] Each goal post is 16 m (52 feet) in height (however they can be built higher) [1] and for the purpose of judging a goal are considered to extend upwards indefinitely. [11] The posts and crossbar form an "H" shape. Goal posts supported by only one post below the crossbar are permissible. [11] The bottom 2 m (6.6 feet) of a goal post is recommended to be padded to protect players from injury. [10] At professional level, these pads are usually cuboids that encase each post.

A corner post is placed at the points where each touch line meets each goal line. [12] The post must consist of non-rigid material and should be at least 1.3 m (4.3 feet) in height. [6] The corner posts are in touch in-goal, [12] that is to say they act in the same way as sidelines and the ball-carrier touching them immediately halts play.

During the 2010 NRL season, a rule change to the playing field was implemented so that if a player in possession of the ball made contact with the corner post that player would no longer be considered to be touch in-goal. [13] Proponents of the move argued a series a possible future scenarios made this preventative measure necessary, with ARL chief executive Geoff Carr stating, "no one has thought of the possibility of using the corner post as a weapon to defuse a try and we want to stop it before they do". [14] One scenario was that a defending player might manipulate the corner post to put an attacker out of play. [14] Another concern cited was that the corner post might be made to make contact with a rolling ball to ensure the defending team gains possession with a 20-metre restart. [14] Corner posts, which sometimes lean to one side, have no upper height limit set and this led to a fear that corner posts might become "long rubber snakes, biting attackers and sending them into touch", in the words of Roy Masters. [14] Other laws concerning the corner posts remained unchanged. [15] A ball that makes contact with the corner post while not in the possession of a player will be deemed to be touch in-goal as before. [15] There was no attempt to remove the corner posts from the playing field as they are used to promote sponsors and are also a useful aid for players to judge their kicks. [14] The change was agreed by the NRL Board and approved by the RLIF as an experimental rule. [13] Implementation occurred mid-season following feedback from clubs. [13] 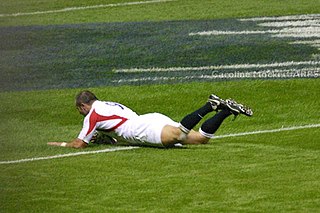 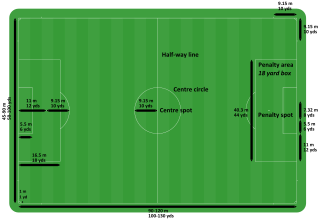 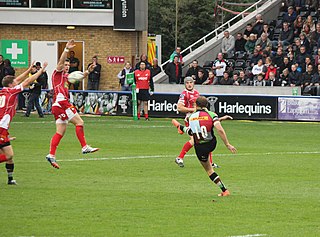 The 2010 NRL season was the 103rd season of professional rugby league football club competition in Australia, and the thirteenth run by the National Rugby League. The season commenced on 12 March and ended with the Grand Final, played on 3 October at ANZ Stadium. Sixteen teams competed for the 2010 Telstra Premiership whilst the third season of the National Youth Competition was also in progress.