Rezball, short for "reservation ball," is the avidly followed Native American version of basketball, particularly a style of play specific to Native American teams of some areas.

Rezball is transition-based basketball that forces tempo with aggressive play, quick scoring (or at least shooting) and assertive defense that looks to force turnovers through pressing or half-court traps. There are slight variations from program to program. Keys to a good rezball offensive play are sound fundamentals and being in very good condition. Many Native Americans adapted to basketball to bring them together with each other and is their way to overcome strife on the reservation.

The Apache, Pueblo and Navajo tribes in northeastern Arizona and northwestern New Mexico are home to several high schools. In these areas basketball is very important. In Arizona, three of the top six largest crowds at a boys' basketball game are rezball games (regardless of school size), with one of the two games tied for the highest-ever attendance being a game between Apache and Navajo schools.

Arizona's Native American largest high school arenas are; The Nash Center (Kayenta, AZ) seats 3,800, The Warrior Pavilion (Tuba City, AZ) seats 4,518, the Ganado Pavilion (Burnside, AZ) seats 5,500, The Wildcat Den (Chinle, AZ) seats 7,510, and the Bee Hółdzil Fighting Scouts Events Center (Fort Defiance, AZ) seats about 6,532. These massive arenas draw large crowds from all around the Navajo Reservation. The border town teams for Arizona that are within the AIA 3A Division are Winslow, Holbrook and Page — which consists mainly of Native Americans. [1] Some other examples of the intense following of basketball in this region were noted in February 2013 by a writer for MaxPreps.com, the high school arm of CBSSports.com . First, early in the month, the Wildcat Den hosted an Arizona Interscholastic Association (AIA) sectional tournament featuring four boys' and four girls' reservation teams. Even though neither Chinle High team participated in the sectional, more than 12,000 attended over the two-day event, with hundreds of fans arriving hours before the doors opened to get the best seats. [1] The scheduling of the AIA's state tournament later that month at the venue then known as Jobing.com Arena in Glendale, home to the NHL's Arizona Coyotes, also reflected rezball influence. In most states that host multiple state championship games at one site, the last game scheduled is the boys' championship game in the largest enrollment class. Here, however, the marquee slot was reserved for the girls' title game in Class 3A (the state's largest schools are in Class 5A)—a classification that has traditionally been dominated by reservation schools. [1]

While the Native American basketball phenomenon is most pronounced in the Four Corners region, it is not limited to that area. For example, when the girls' team from the reservation high school of the Mississippi Band of Choctaw Indians reached the final of the Class 3A state tournament in 2017 (which they won), about 5,000 fans traveled from the reservation to Jackson for the game. [2]

Co-founded in 2003 by Mark West/former Phoenix Suns player, the late Scott Podleski/Arizona Rattlers and GinaMarie Scarpa/former Executive Director AC Green Youth Foundation (named for AC Green/NBA Iron Man). Every year the NABI Foundation host the Native American Basketball Invitational (NABI) in Arizona, an all native tournament sponsored by Nike N7, Ak-Chin Indian Community, Seminole Tribe of Florida, Gila River Indian Community, Phoenix Suns and Phoenix Mercury. In its 17th year, it has become recognized as the premier all Native youth tournament in the world and made history in 2007 as the first all Native tournament sanctioned by the NCAA after NABI Foundation President & CEO GinaMarie Scarpa insisted the NCAA respect Tribal Sovereignty and exempt the tournament from abiding to their "same state rule". The tournament hosts 128+ teams from all over the U.S., Canada and New Zealand, and is instrumental in showcasing the talent of the players to college recruiters, most of whom would not travel to the remote reservation towns to recruit. www.nabifoundation.org

Ganado is a chapter of the Navajo Nation and census-designated place (CDP) in Apache County, Arizona, United States. The population was 1,210 at the 2010 census. 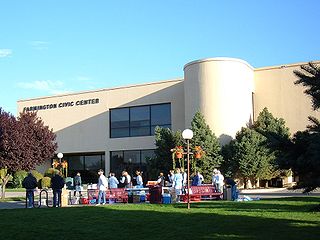 Farmington is a city in San Juan County in the U.S. state of New Mexico. As of the 2010 census the city had a total population of 45,877 people. Farmington makes up one of the four Metropolitan Statistical Areas (MSAs) in New Mexico. The U.S. Census Bureau's population estimate in 2019 for Farmington was 44,372. 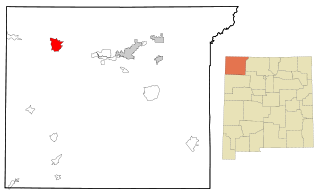 Shiprock is a census-designated place (CDP) on the Navajo reservation in San Juan County, New Mexico, United States. The population was 7,718 people in the 2020 census. It is part of the Farmington Metropolitan Statistical Area. 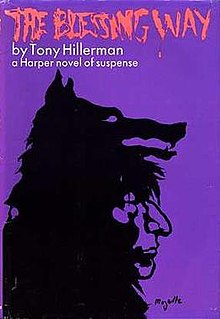 The Blessing Way is the first crime fiction novel in the Joe Leaphorn / Jim Chee Navajo Tribal Police series by Tony Hillerman. First published in 1970, it introduces the character of officer Joe Leaphorn. 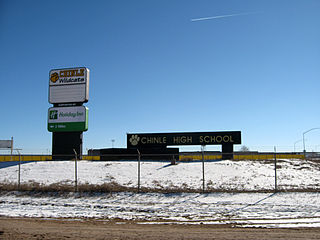 Chinle High School is a public high school in Chinle, an unincorporated area of Apache County, Arizona, United States. The school is the only high school in the Chinle Unified School District, and all of the district's elementary and middle schools feed into it. Chinle High School serves several unincorporated areas in Apache County, including Chinle, Lukachukai, Many Farms, Rough Rock, Tsaile, and some areas considered to be Nazlini. The areas the school serves are within the Navajo Nation. 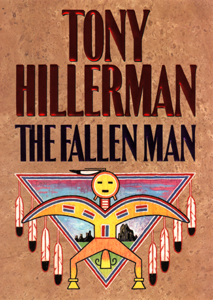 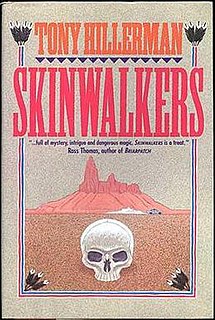 Skinwalkers is the seventh crime-fiction novel in the Joe Leaphorn/Jim Chee Navajo Tribal Police series by author Tony Hillerman published in 1986. The film version,Skinwalkers, was adapted for television for the PBS Mystery! series in 2002. 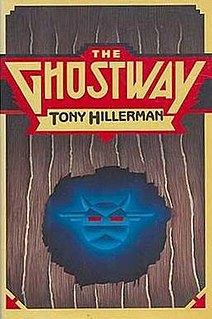 The Ghostway is the sixth crime fiction novel in the Joe Leaphorn / Jim Chee Navajo Tribal Police series by Tony Hillerman. It was first published in 1984 and features Jim Chee.

The 2007 Southwest Cup was held on the Navajo Nation of the United States. It was the 26th time the Southwest Cup has been contested since its establishment. 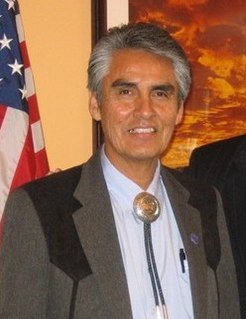 The Navajo Nation Presidential elections took place on November 7, 2006. The election process begins with a primary election, which took place on August 8, 2006. In all there was a total of 11 Navajo individuals vying for the office of Navajo Nation President. There was a woman, a medicine man, a pastor, and even a former Arizona State Senator that wanted to take on the current Administration, the Shirley/Dayish Administration.

Kirtland Central High School (KCHS) is located in the town of Kirtland, New Mexico, United States. Its colors are Purple & Gold and their mascot is the Bronco. KCHS is a part of the Central Consolidated School District along with Newcomb High School and Shiprock High School.

Shiprock High School is a public high school in Shiprock, New Mexico (USA). Shiprock High is part of the Central Consolidated School District along with Kirtland Central High School and Newcomb High School. The school colors are Crimson, Silver, and Turquoise and the mascot is the Chieftain. 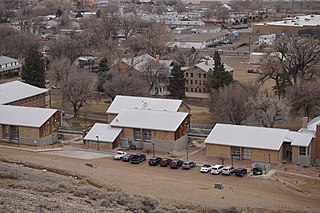 Navajo Preparatory School is a college preparatory school located in Farmington, New Mexico. The school is fully sanctioned by the Navajo Nation since 1991 when the previous Navajo Academy closed due to lack of funding. The campus is currently undergoing a remodelling project for the past few years that includes new dormitories, classrooms, and an athletic sports complex. The school colors are black, turquoise, yellow, and white which represent the four seasons in Navajo Culture and the mascot is the eagle. The previous school colors for Navajo Mission and Navajo Academy were red, white, and blue. In 2021- 2022 school year, the school color will go back to red, white, and blue.

Harrison Begay, also known as Haashké yah Níyá was a renowned Diné (Navajo) painter, printmaker, and illustrator. Begay specialized in watercolors, gouache, and silkscreen prints. At the time of his death in 2012, he was the last living, former student of Dorothy Dunn and Geronima C. Montoya at the Santa Fe Indian School. His work has won multiple awards and is exhibited in museums and private collections worldwide and he was among the most famous Diné artists of his generation. 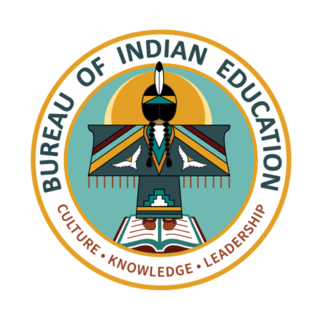 The Bureau of Indian Education (BIE), headquartered in the Main Interior Building in Washington, D.C., and formerly known as the Office of Indian Education Programs (OIEP), is a division of the U.S. Department of the Interior under the Assistant Secretary for Indian Affairs. It is responsible for the line direction and management of all BIE education functions, including the formation of policies and procedures, the supervision of all program activities, and the approval of the expenditure of funds appropriated for BIE education functions.

Many Farms Community School, Inc. (MFCS), is a tribally controlled K-8 school in Many Farms, Arizona, operated by the Navajo Nation. It is funded by the Bureau of Indian Education (BIE). MFCS has a boarding program to serve students who live at a distance from this community.