Look up dead ball in Wiktionary, the free dictionary.

In gridiron football, a dead ball is a condition that occurs between football plays, after one of the following has occurred:

The ball remains dead until it is snapped to begin the next play. During the time in which the ball is dead, the offensive team may not attempt to advance it and no change of possession can take place. The clock may or may not be stopped during this time, depending on the circumstances.

In the past, in the NFL, the ball was also dead if it came into the possession of the defense for any reason during the try after a touchdown. This rule was changed for the 2015 season, allowing the ball to remain live so that the defense could attempt to return it for a defensive two-point conversion.

Times when it can be a dead ball:

In baseball, when the ball is dead, no runners may advance beyond the respective bases they are entitled to, and no runners may be put out. The ball becomes dead when: [1]

After a dead ball, the ball becomes alive again when the pitcher stands on the pitcher's plate ready to pitch, the batter, catcher and umpire are ready, and the umpire calls or signals "Play."

Players and coaches may ask an umpire for "time," but they themselves may not call "time" and cause the ball to become dead. Nevertheless, "time" is usually granted by the umpire when asked, and thus, colloquially, it is often said that players or coaches indeed can "call time." Unlike sports which have clocks to time the play, the phrase "time out" is not used in baseball. Likewise, there is no limit to the number of times a team can "call time."

In baseball, the term "dead ball" is also used in the context of the dead-ball era, a phase during the early history of the game in the early 1900s. In this context, the ball was not actually "dead" but for various reasons tended to be difficult to hit for distance, resulting in low scores and few home runs by modern standards.

In cricket, a dead ball is a particular state of play in which the players may not perform any of the active aspects of the game, [5] meaning batters may not score runs and fielders may not attempt to get batters out.

The ball, referring to the cricket ball, becomes live when the bowler begins his run up in preparation to bowl at the batter. In the live state, play occurs with the batters able to score runs and get out.

The ball becomes dead when any of the following situations occur:

Umpires may also call dead ball at their discretion, in the case of a series for events for which there is no provision in either the Laws of Cricket or agreements made prior to the match. This happened on 9 October 2005, when Australian batter Michael Hussey hit the retracted roof at the Telstra Dome. What would have been six in an open stadium was ruled a dead ball, and no runs were awarded.

Note that the ball becomes dead as soon as a batter is out, so it is not possible to dismiss the other batter immediately. Thus the baseball concept of a double play cannot occur in cricket.

If necessary to make it clear to the players and scorers that the umpire considers the ball to be dead, the umpire signals dead ball by crossing and uncrossing his arms in front of his body.

Main article: Ball in and out of play

In association football (soccer), the term "dead ball" refers to a situation when the ball is not in play, e.g. when play has not been restarted after the ball has gone out of bounds or a foul has been committed. It also applies before each kick-off, either at the start of each half or after a goal has been scored. In a dead ball situation, players can position the ball with their hands prior to restarting play. Furthermore, even though the ball is not in play, the referee may still issue cautions or ejections (yellow or red cards) for any incident that occurs off the ball. Fouls, on the other hand, can occur only while the ball is in play.

In basketball, most or any time play is stopped the ball is considered dead, such as when a foul has been committed and called by a referee, a foul shot has been attempted and another one is yet to be attempted, or the ball has gone out of bounds. Player substitutions may then be made. Section IV of the NBA rule book contains the official definition of a dead ball. [7] [8] [9]

Each end of a rugby league field has a dead ball line; when the ball (or player in possession) crosses or touches this line, the ball is said to have gone dead. This results in a goal line drop out if the defending team had caused the ball to go dead; otherwise, a 20-metre restart ensues.

In baseball statistics, a hit, also called a base hit, is credited to a batter when the batter safely reaches or passes first base after hitting the ball into fair territory with neither the benefit of an error nor a fielder's choice. 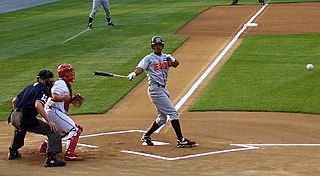 In baseball, the rules state that a batted ball is considered in flight when it has not yet touched any object other than a fielder or his equipment. Such a ball can be caught by a fielder to put the batter out. 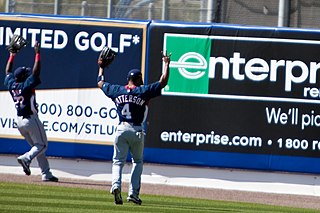 A ground rule double is a baseball rule that awards two bases from the time of pitch to all baserunners including the batter-runner, as a result of the ball leaving play after being hit fairly and leaving the field under a condition of the ground rules in effect at the field where the game is being played. An automatic double is the term used to refer to a fairly hit ball leaving the field in circumstances that do not merit a home run, such as when the ball's first bounce was within the field. The automatic double is quite often mistakenly called a ground rule double. 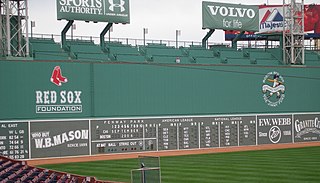 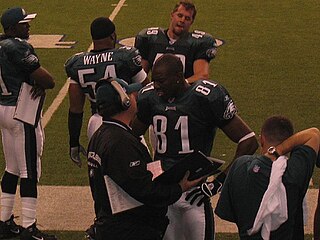