Last updated May 10, 2022
Substitute baserunner in baseball or softball

One of the most famous pinch runners was Herb Washington of the Oakland Athletics. [3] Oakland owner Charlie Finley, known as an unconventional thinker, came to believe that it would be useful to have a "designated runner"—a fast player on the roster whose only job was to periodically enter a game and run the bases for slower players. He signed Washington, a track star with no baseball experience. Washington appeared in 105 games for the Athletics in 1974 and 1975, scoring 33 runs and stealing 31 bases, without once playing the field or coming up to bat. [4] His 1975 Topps baseball card is the only baseball card in history to use the "Pinch Runner" position label. [5]

For statistical and scorekeeping purposes, the pinch runner is denoted by PR. [6]

After organized professional baseball was started with the National League in 1876, the National League changed a rule in 1878 so that pinch runners were not allowed except in cases of illness or injury with the substitute entering the game after the original player reached base. [7]

In baseball, a pinch hitter is a substitute batter. Batters can be substituted at any time while the ball is dead ; the manager may use any player who has not yet entered the game as a substitute. Unlike basketball, American football or ice hockey, and in a similar way to association football, baseball does not have a "free substitution rule" and thus the replaced player is not allowed back into that game. The pinch hitter assumes the spot in the batting order of the player whom he replaces. 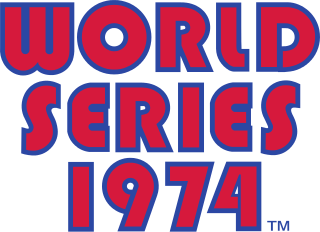 The 1974 World Series was the championship series of Major League Baseball's (MLB) 1974 season. The 71st edition of the World Series, it was a best-of-seven playoff played between the American League (AL) champion Oakland Athletics and the National League (NL) champion Los Angeles Dodgers. The Athletics won the series, four games to one; after splitting the first two in Los Angeles, Oakland swept their three home games to close it out. 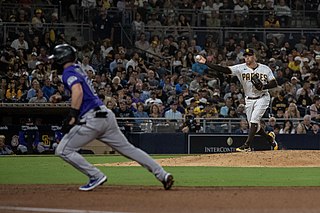 Jason Jerome Ellison is a former Major League Baseball outfielder. He attended Lewis-Clark State in Lewiston, Idaho, and made his major league debut on May 9, 2003. As of the 2015 season, he was an area scout for the Los Angeles Angels of Anaheim based in Issaquah, Washington.

Scott Allen Hatteberg is an American former professional first baseman and catcher. During his MLB career, spanning from 1995 through 2008, he played for the Boston Red Sox, Oakland Athletics, and Cincinnati Reds. Before his major league career, Hatteberg attended Washington State University, where he played college baseball for the Cougars.

The 1989 American League Championship Series was played between the Oakland Athletics and the Toronto Blue Jays from October 3 to 8. A dominant Oakland team took the Series four games to one, en route to a sweep of their cross-bay rivals, the San Francisco Giants, in a World Series marred by the destructive Loma Prieta earthquake.

The 1985 American League Championship Series was played between the Kansas City Royals and the Toronto Blue Jays from October 8 to 16. Major League Baseball decided to extend the Championship Series in both leagues from its best-of-five (1969–1984) to the current best-of-seven format starting with this year, and it proved pivotal in the outcome of the ALCS. The Blue Jays seemingly put a stranglehold on the Series, earning a three games to one lead over the Royals after four games. However, Kansas City staged an improbable comeback, winning the next three games to win the American League Championship Series four games to three. The Royals would proceed to defeat their cross-state rivals, the St. Louis Cardinals, in the World Series four games to three.

The 2002 Oakland Athletics season was the 102nd season in franchise history and the 35th season in Oakland, California. The Athletics finished first in the American League West with a record of 103–59.

A suspended game in baseball occurs when a game has to be stopped before it can be completed, and the game is meant to be finished at a later time or date. Suspended games are used in Major League Baseball, Minor League Baseball, and may also be used at other levels of play depending on league or tournament rules.

James Paul Hinson was an American professional baseball shortstop and third baseman who made three appearances for the 1928 Boston Red Sox of Major League Baseball (MLB) as a pinch runner. Listed at 5 feet 10 inches (1.78 m) and 150 pounds (68 kg), he batted and threw right-handed. He later served as a police officer in Muskogee, Oklahoma.

The 1962 National League tie-breaker series was a three-game playoff series that extended Major League Baseball's (MLB) 1962 regular season to determine the winner of the National League (NL) pennant. The games were played from October 1 to 3, 1962, between the Los Angeles Dodgers and the San Francisco Giants. The Giants won the series, two games to one. The first game took place at Candlestick Park and the second and third were played at Dodger Stadium. The tie-breaker series was necessary after both teams finished the season with identical win–loss records of 101–61. The Dodgers won a coin flip late in the season, which gave them home field advantage for the series.