Outfielders must cover large distances, so speed, instincts and quickness to react to the ball are key. They must be able to catch fly balls above their head and on the run, as well as prevent balls hit down the right field foul line from getting past them. Being situated 250–300 feet from home plate, they must be able to throw the ball accurately over a long distance to be effective. Of all outfield positions, the right fielder often has the strongest arm, because they are the farthest from third base.

Right field has developed a reputation in Little League for being a position where weaker players can be "hidden" from the action. Unlike the Major League level where players routinely hit the ball in all directions and distances, most Little League players do not hit the ball into the outfield on a regular basis. Additionally, since right-handed batters—who tend to hit the ball in the left direction—are far more common than left-handed batters, the left fielder (and to lesser degree the center fielder) tend to have much more opportunities to make a play than the right fielder.

The reputation of right field being a position for unathletic players was further brought into the mainstream by children’s entertainer, picture book author and recording artist Willy Welch's song "Playing Right Field", which was popularized by Peter, Paul and Mary as simply "Right Field" for their 1986 album No Easy Walk to Freedom, and as a Pizza Hut commercial in 1990. Both the song and commercial feature an awkward Little Leaguer bored out in right field, when the batter hits a ball and the right fielder (to everyone's surprise) successfully catches it, breaking the stigma that right fielders are weaker players.

In the children's comic strip Peanuts, Lucy Van Pelt is the right fielder on Charlie Brown's team, and she often misses catches or gets distracted from the game. 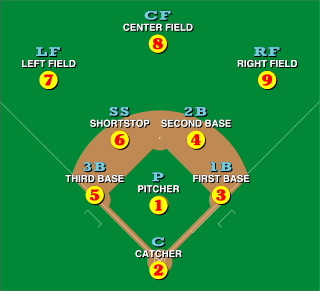 In the sport of baseball, each of the nine players on a team is assigned a particular fielding position when it is their turn to play defense. Each position conventionally has an associated number, for use in scorekeeping by the official scorer: 1 (pitcher), 2 (catcher), 3, 4, 5, 6 (shortstop), 7, 8, and 9. Collectively, these positions are usually grouped into three groups: the outfield, the infield, and the battery. Traditionally, players within each group will often be more able to exchange positions easily ; however, the pitcher and catcher are highly specialized positions and rarely will play at other positions. 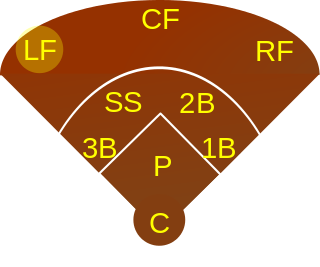 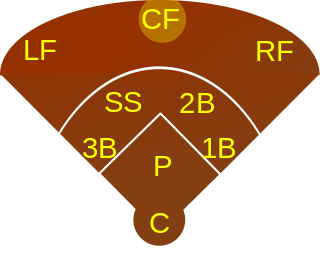 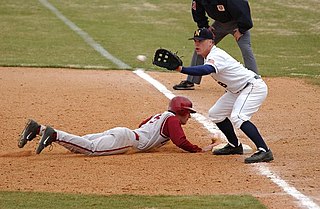 In baseball, part of the infielders' and pitcher's jobs is to cover bases. That is, they stand next to a base in anticipation of receiving the ball thrown from another fielder, so that they may make a play on an opposing baserunner who is approaching that base. On a force play, the fielder covering the base stands with one foot on that base. 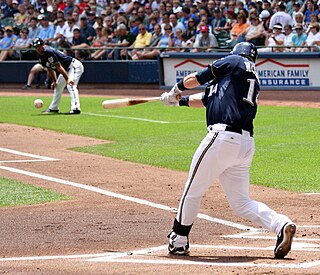