Last updated May 13, 2021
Method of situational substitutions in sports

A platoon system in basketball, baseball, or football is a method for substituting players in groups (platoons), to keep complementary players together during playing time.

In baseball, a platoon is a method of sharing playing time, where two players are selected to play a single defensive position. Usually, one platoon player is right-handed and the other is left-handed. Typically the right-handed half of the platoon is played on days when the opposing starting pitcher is left-handed and the left-handed player is played otherwise. [1] The theory behind this is that generally players hit better against their opposite-handed counterparts, and that in some cases the difference is extreme enough to warrant complementing the player with one of opposite handedness.

Platooning can be viewed negatively. Players prefer to play every day, [3] and managers, including Walter Alston, feared that sharing playing time could decrease confidence. [4] Mookie Wilson of the New York Mets requested a trade in 1988 after serving in a platoon for three seasons with Lenny Dykstra. [5]

The advantage to alternating hitters based on handedness was known from the early days of baseball. Bob Ferguson, in 1871, became baseball's first switch hitter, allowing him to bat left-handed against right-handed pitchers, and right-handed against left-handed pitchers. [6] The first recorded platoon took place in 1887, when the Indianapolis Hoosiers briefly paired the right-handed Gid Gardner and left-handed Tom Brown in center field. [7] [8] In 1906, the Detroit Tigers alternated Boss Schmidt, Jack Warner, and Freddie Payne at catcher for the entire season. [9] As manager of the Boston Braves, George Stallings employed platoons during the 1914 season, which helped the "Miracle" Braves win the 1914 World Series. [10] No Braves outfielder reached 400 at-bats during the 1914 season. [11] In 1934 and 1935, Detroit Tigers' manager Mickey Cochrane routinely platooned Gee Walker, a right-handed batter, to spell center fielder Goose Goslin and right fielder Jo-Jo White, who were both left-handed batters. Cochrane, a left-handed batter, also platooned himself behind the plate with Ray Hayworth, a right-handed batter. Also in the 1930s, Bill Terry of the New York Giants platooned center fielders Hank Leiber and Jimmy Ripple. [1] The approach was seldom used in the 1930s, [9] but Casey Stengel, managing the Braves, platooned third basemen Debs Garms and Joe Stripp in 1938. [1] Stengel himself had been platooned as a player by managers John McGraw and Wilbert Robinson. [10] [12] Garms won the National League's batting title in 1940 with the Pittsburgh Pirates as a part-time player under Frankie Frisch. [1]

Terms for this strategy included "double-batting shift, "switch-around players", and "reversible outfield". Tris Speaker referred to his strategy as the "triple shift", because he employed it at three positions. [13] The term "platoon" was coined in the late 1940s. Stengel, now managing the New York Yankees, became a well known proponent of the platoon system, [14] and won five consecutive World Series championships from 1949 through 1953 using the strategy. Stengel platooned Bobby Brown, Billy Johnson, and Gil McDougald at third base, Joe Collins and Moose Skowron at first base, and Hank Bauer and Gene Woodling in left field. [1] Harold Rosenthal, writing for the New York Herald , referred to Stengel's strategy as a "platoon", after the American football concept, and it came to be known as "two-platooning". [15] [16]

Following Stengel's success, other teams began implementing their own platoons. [17] In the late 1970s through early 1980s, Baltimore Orioles manager Earl Weaver successfully employed a platoon in left field, using John Lowenstein, Benny Ayala, and Gary Roenicke, using whichever player was performing the best at the time. [18] Weaver also considered other factors, including the opposing pitcher's velocity, and his batters' ability in hitting a fastball. [10] The Orioles continued to platoon at catcher and all three outfield positions in 1983 under Joe Altobelli, as the Orioles won the 1983 World Series, [19] leading other teams to pursue the strategy. [20]

Platooning decreased in frequency from the late 1980s through the 1990s, as teams expanded their bullpens to nullify platoon advantages for hitters. [7] However, the use of platoons has increased in recent years. As teams increase their analysis of data, they attempt to put batters and pitchers in situations where they are more likely to succeed. Generally, small market teams, which cannot afford to sign the league's best players to market-value contracts, are most likely to employ platoons. Under manager Bob Melvin, the Athletics have employed many platoons, [21] with Josh Reddick calling Melvin the "king of platoons". [22] Joe Maddon began to employ platoons as manager of the Tampa Bay Rays. [23] [24]

When a football team uses two (or more) quarterbacks to run their offense, rather than the traditional one in football, it is known as "platooning quarterbacks". This tactic becomes less common the higher the level of football (high school teams are more likely to do it than National Football League teams for example). Quarterbacks may be switched in and out of the game every play, every drive, every quarter, or depending on certain situations. If quarterbacks are switched game to game that is not platooning, that is a "quarterback controversy" or a simple benching.

Using two different quarterbacks allows an offense to use players with different skill sets. One common reason teams platoon quarterbacks is because one player is a good passer and the other a good runner (see for example Stanley Jackson and Joe Germaine of the 1997 Ohio State Buckeyes). Thus defenses have to prepare for two types of quarterback, not just one. It also allows offenses to run a greater variety of plays. 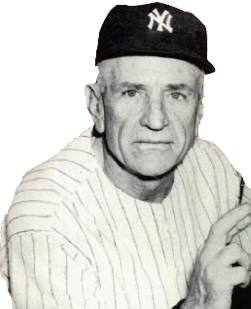 Charles Dillon "Casey" Stengel was an American Major League Baseball right fielder and manager, best known as the manager of the championship New York Yankees of the 1950s and later, the expansion New York Mets. He was elected to the Baseball Hall of Fame in 1966. 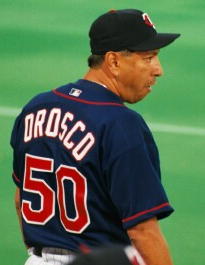 Wilbert Robinson, nicknamed "Uncle Robbie", was an American catcher, coach and manager in Major League Baseball (MLB). He played in MLB for the Philadelphia Athletics, Baltimore Orioles, and St. Louis Cardinals. He managed the Orioles and Brooklyn Robins. Robinson was inducted into the Baseball Hall of Fame in 1945.

Paul Rapier Richards was an American professional baseball player, manager, scout and executive in Major League Baseball. During his playing career, he was a catcher and right-handed batter with the Brooklyn Dodgers (1932), New York Giants (1933–1935), Philadelphia Athletics (1935) and Detroit Tigers (1943–1946). After retiring, he became the manager of the Chicago White Sox and Baltimore Orioles (1955–1961). He also served as the General Manager for the Orioles, the Houston Colt .45s and the Atlanta Braves.

The 1969 World Series was the championship series of Major League Baseball's (MLB) 1969 season. The 66th edition of the World Series, it was a best-of-seven playoff between the American League (AL) champion Baltimore Orioles and the National League (NL) champion New York Mets. The Mets won the series, four games to one, to accomplish one of the greatest upsets in Series history, as that particular Orioles team was considered to be one of the finest ever. The World Series win earned the team the sobriquets "The Amazin' Mets" and "The Miracle Mets". This was the first World Series of MLB's divisional era. 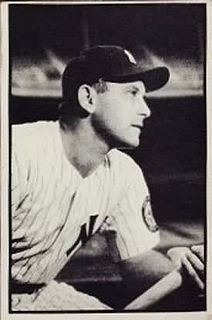 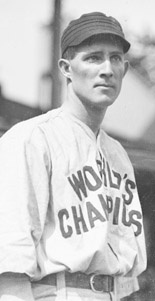 The following are the baseball events of the year 1966 throughout the world. 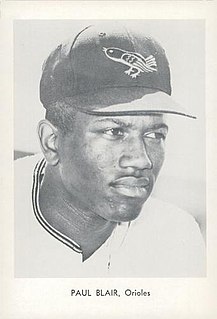 Christopher Anthony Denorfia is an American former professional baseball outfielder and coach. He currently serves as the manager for the Hartford Yard Goats, who are the Double-A affiliate of the Colorado Rockies of Major League Baseball (MLB), following a playing career that includes stints with the Cincinnati Reds, Oakland Athletics, San Diego Padres, Seattle Mariners and Chicago Cubs. 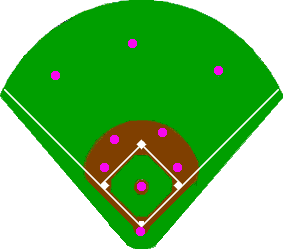 The infield shift in baseball is a defensive realignment from the standard positions to blanket one side of the field or another. Used primarily against left-handed batters, it is designed to protect against base hits pulled hard into the gaps between the fielders on one side. Originally called the Williams shift, it has periodically been referred to as the Boudreau shift or Ortiz shift since then. 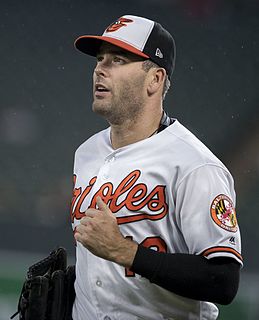 The following are the baseball events of the year 2014 throughout the world. 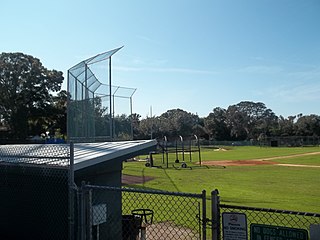 Huggins-Stengel Field is a baseball field located within Crescent Lake Park in St. Petersburg, Florida, United States. It was originally constructed in 1925 as a Spring Training practice field for the New York Yankees and later hosted the New York Mets and Baltimore Orioles. The Yankees held spring training home games in St Petersburg at the field until their move to Al Lang Stadium in 1947. The field is currently used for various high school and collegiate baseball games. The facility was listed on the National Register of Historic Places in 2019.

A fifth infielder is the rare instance in baseball when a team may elect to bring in an outfielder to play the infield. This is usually done when the game is tied in the bottom of the ninth or an extra inning, the home team has a runner at 3rd base with fewer than two outs. Normally with a runner on 3rd with less than two outs, a manager will usually have the infield playing in, as to cut down a runner trying to score. Bringing the infield in is a typical strategy used late in games, when a potential tying, go-ahead, winning or crucial insurance run is at 3rd base with less than two outs. In cases like this, if a ball is hit right to an infielder, the infielder usually has a chance to throw out the runner trying to score. However, any ground ball not hit at an infielder will usually have a good chance to score the runner, plus the batter reaching base safely, versus if the infield plays back. When the infield plays back, it does make it more likely for the run to score, but the infielders are more likely to get the batter out via a ground out.