The Pyramid Play is a defensive play in American football, where a defensive player is hoisted up by two other players in an effort to block a place kick attempt by the opposing team. The play was created and implemented by the 1933 Oregon State Agricultural College team (now known as Oregon State University). [1]

The play originated as a playful prank during an OSAC practice session. While the offense was practicing a place kick, the pranksters decided to give it a shot. Their prank was actually successful at blocking the kick. This success did not go without notice. OSAC's head coach, Lon Stiner, decided that maybe his boys had discovered something and decided to add the play to the team's repertoire. [1]

The Pyramid Play was first used unsuccessfully in a game on October 28, 1933, against Washington State College (now Washington State University) without much fanfare. [2] [3] The play was used again on November 11, 1933, against the University of Oregon during the annual Civil War game at Multnomah Stadium, now Providence Park. The Beavers had a 6'5" (1.97 m) center named Clyde Devine and two 6'2" (1.88 m) tackles named Harry Fields and Ade Schwammel. The two tackles hoisted Devine upon their shoulders. [1] With the combination of their height and Devine's long arm span, they succeeded in blocking one of Oregon's two kicks. [3] [4] The play is "probably the most notorious on-field shenanigan" in the history of the Civil War game. [5]

Oregon State also successfully used the play again to help defeat the Fordham Rams 9-6 on November 18, 1933 at the Polo Grounds.

Oregon Journal staff photographer Ralph Vincent managed to capture the use of the play in the 1933 Civil War with his Graflex camera. Instantly, Vincent, his photo, and the OAC Beavers were thrust into national attention. The photo quickly appeared in the Saturday Evening Post and other eastern newspapers. Discussion of the play heated up quickly with sportswriters arguing whether the play was good or not for the game of football. Some simply labeled the play a 'sports trick'. [4]

During World War II, it was reported that Nazi Germany distributed copies of the image around Europe as an example of the “brutality of American sports.” [4]

The NCAA decided to ban the use of the play [5] upon the conclusion of the 1933 season. That ruling is still in effect. 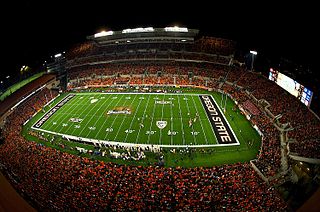 Reser Stadium is an outdoor athletic stadium in the northwest United States, on the campus of Oregon State University in Corvallis, Oregon. It is the home of the Oregon State Beavers of the Pac-12 Conference, and opened 69 years ago in 1953 as Parker Stadium. It was renamed in 1999.

Alonzo L. "Lon" Stiner was an American football player and coach. He was the head coach at Oregon State College—now Oregon State University—from 1933 to 1948, compiling a record of 74–49–17. Stiner led the Oregon State Beavers to the Pacific Coast Conference in 1941 and the three bowl game victories.

The Oregon State Beavers football team represents Oregon State University in NCAA Division I FBS college football. The team first fielded an organized football team in 1893 and is a member of the Pac-12 Conference's North Division. Jonathan Smith has been the head coach since November 29, 2017. Their home games are played at Reser Stadium in Corvallis, Oregon and Providence Park in Portland, Oregon

Donald E. Scott was a star of American football. He was a two-time All-America quarterback at the Ohio State University. As a pilot Scott had already completed nine bombing missions during World War II, on October 1, 1943, while going through a special training exercise in England, Scott's bomber crashed, taking his life at just age 23. 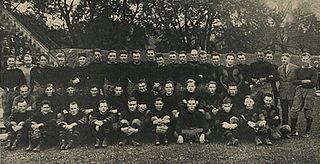 The 1921 Iowa Hawkeyes football team represented the University of Iowa in the 1921 Big Ten Conference football season. The team was coached by Howard Jones. In the opening game of the 2012 season, the Hawkeyes wore gold and black uniforms to honor the 1921 team against Iowa State. The team was retroactively selected as the 1921 national champion by the Billingsley Report and as a co-national champion by Parke H. Davis.

Adolphe "Ade" John Schwammel was an American football tackle who played five seasons in the National Football League with the Green Bay Packers.

The 1942 Rose Bowl was the 28th edition of the college football bowl game, played on Thursday, January 1, 1942. Originally scheduled for the Rose Bowl in Pasadena, California, it was moved to Durham, North Carolina, due to fears about an attack by the Japanese on the West Coast of the United States following the attack on Pearl Harbor on December 7, 1941. The federal government prohibited large public gatherings on the West Coast for the duration of World War II; the first significant canceled event was the Rose Bowl Game scheduled for New Year's Day, 1942.

The 1964 Oregon State Beavers football team represented Oregon State University in the 1964 NCAA University Division football season. The Beavers ended this season with eight wins and three losses in their first season in the Athletic Association of Western Universities after competing as an independent for five years. The team captains were linebacker Dick Ruhl and fullback Booker Washington. The Beavers outscored their opponents 149 to 124.

The 1962 Oregon State Beavers football team represented Oregon State University as an independent during the 1962 NCAA University Division football season. In their eighth season under head coach Tommy Prothro, the Beavers compiled a 9–2 record and outscored their opponents 279 to 148. They played three home games on campus at Parker Stadium in Corvallis and three at Multnomah Stadium in Portland.

The 1941 Oregon State Beavers football team represented Oregon State College in the 1941 college football season. The Beavers ended this season with eight wins and two losses. They were the Pacific Coast Conference champions and won the 1942 Rose Bowl over Duke. Because of the Japanese attack on Pearl Harbor, the Rose Bowl was held in Durham, North Carolina. Oregon State thus became the only team to win a Rose Bowl outside Pasadena, California.

The 1967 Oregon State Beavers football team represented Oregon State University in the 1967 NCAA University Division football season. The Beavers ended this season with seven wins, two losses, and a tie, and outscored their opponents 187 to 137. Led by third-year head coach Dee Andros, Oregon State finished with 7–2–1 record, 4–1–1 in the Athletic Association of Western Universities tied for runner-up for a second consecutive year.

The History of Oregon State Beavers football covers more than 120 seasons since the team began play in 1893.

The 1985 Oregon State Beavers football team represented Oregon State University in the 1985 NCAA Division I-A football season. The Beavers started the season 2–0, their best start in 18 years, but lost all but one of their remaining games to post their 18th consecutive losing season. The Beavers' 3–8 record was their best in seven years. The 1985 season is best known for Oregon State's 21–20 win over Washington, the largest point spread upset before Stanford's 2007 win over USC. 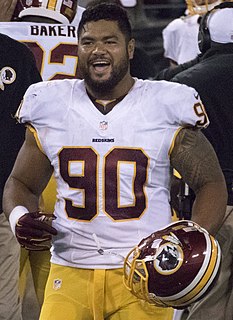 Stephen Paea is a New Zealand–born former American football defensive tackle. He played college football for Oregon State University, and was recognized as a consensus All-American. He was drafted by the Chicago Bears in the second round of the 2011 NFL Draft, and has also played for the Washington Redskins, Cleveland Browns, and Dallas Cowboys.

The 1983 Oregon State vs. Oregon football game was a college football game played on November 19, 1983, at Autzen Stadium in Eugene, Oregon, the 87th playing of the annual Oregon–Oregon State football rivalry game, then known as the Civil War. The game ended in a scoreless tie, and since overtime was added to NCAA Division I games in 1996, this is likely to be the last such game. However, there have been two more scoreless ties in regulation since then, in 2005 and 2014.