Arguably, the two most difficult positions on offense to develop quickly are wide receivers and quarterbacks. A style of play was needed for teams that could not field strong throwing quarterbacks. In the flexbone formation, intelligent and athletic personnel can adapt to playing a quarterback's position without having to throw the ball very well. Flexbone teams are often playing against more talented teams so they must use time management and trickery of the flexbone to even the playing field. By running the ball almost exclusively, a flexbone offense also runs the game clock and limits the opposing teams possibly faster and stronger offense from scoring against their own defense.

Another key consideration is that the flexbone formation gives the offense four potential vertical receiving threats at the snap: the two wide receivers and the two slotbacks. This is something that alternative formations such as the I-formation or the traditional wishbone cannot achieve without pre-snap motion that tips the offense's hand. This advantage allows the four-verticals play, a deadly weapon against Cover 3, a common defensive coverage used by the eight-man fronts that a strong running team is likely to face.

Since this offense is primarily used by service academies (Air Force, Army, Navy and The Citadel), it helps alleviate the inherent unbalance related to recruiting and being unable to recruit the type of talent that a larger school like Oklahoma or Alabama might be able to. The Flexbone allows for QBs who may be shorter or smaller than ideal (5'10 - 6'2 and weighing around 185-205 pounds) to be able to start because they often have a speed advantage despite not being able to throw the ball as well.

As a result of the misdirection and the size of the outside WRs (usually 6'2 or taller and over 200 pounds) to help block, the slotbacks can be similarly sized to the QB. This allows for the Flexbone to have 3 players who can run fast (with SBs also helping serve as receivers or lead blockers) while the FB can be a more traditional HB size of 220-235 pounds.

Use of the flexbone formation

In Division I Championship Subdivision football, Georgia Southern pioneered a version of the flexbone that won a record six NCAA Championship Subdivision National Titles and nine Southern Conference titles. Through the 2007 season, the United States Air Force Academy (Air Force) and the United States Naval Academy (Navy) were the last major remnants of flexbone football in FBS football and testaments to the formation's ability to use key offensive players effectively when a team has significantly less talent on the field. But with the hiring of former Navy head coach Paul Johnson (who also coached at Georgia Southern) in 2008, Georgia Tech became the first BCS conference school in approximately two decades to use a flexbone offense. In Johnson's first year at Georgia Tech, the Yellow Jackets shared the ACC Coastal Division title with Virginia Tech. In 2009, the Jackets beat Clemson in the ACC Championship game to get to the Capital One Orange Bowl. In 2014, Army hired Jeff Monken, who coached under Johnson, to run the flexbone in hopes of resurrecting the program as he'd done at Georgia Southern in 2010. In 2016 and just his 3rd season, Monken lead the Black Knights to an 8 win season and victory over Navy for the first time in 15 straight tries. In 2017, Army won 10 games including a back-to-back win over Navy, both of which hadn't happened since 1996. In the late 1980s, the University of Arkansas ran a version of the flexbone under coach Ken Hatfield and won two consecutive Southwest Conference titles.

Schools at the FCS (formerly I-AA) level that currently run the Flexbone include Wofford, The Citadel, and more recently the upstart program of the Kennesaw State Owls coached by Brian Bohannon who in 2017 lead the Owls to a 12–2 record and appearance in FCS playoffs in only the 3rd year of the program's existence.

The flexbone offense is also popular at the high school football level.

Slotback, sometimes referred to as an A-back or "slot receiver," is a position in gridiron football. The "slot" is the area between the last offensive lineman on either side of the center and the wide receiver on that side. A player who lines up between those two players and behind the line of scrimmage fills that "slot." The slotback position is a fixture of Canadian football and indoor football where they act as extra receivers. It is also used in American football where the position requires a versatile player, who must combine the receiving skills of a wide receiver, the ball-carrying skills of a running back, and the blocking skills of a tight end. 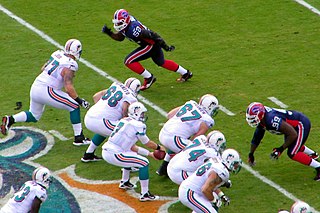