The 46 defense is an American football defensive formation, an eight men in the box defense, with six players along the line of scrimmage. [1] There are two players at linebacker depth playing linebacker technique, and then three defensive backs. The 46 defense was originally developed and popularized with the Chicago Bears by their defensive coordinator Buddy Ryan, who later became head coach of the Philadelphia Eagles and Arizona Cardinals.

Unlike most defensive formations that take their names from the number of defensive linemen and linebackers on the field (i.e. the 4–3 defense has 4 linemen and 3 linebackers), the name "46" originally came from the jersey number of Doug Plank, who was a starting strong safety for the Bears when Ryan developed the defense, a role typically played in the formation as a surrogate linebacker. [2] [3]

The 46 defense is most effective against the two back, two wide receiver sets that many teams commonly used in the 1980s. However, the defensive formation has been rarely used in professional and college football since then as offenses have adapted to use multiple receiver and spread formations to counteract the 46. [4]

I had to use every bit of knowledge and experience and wisdom I had to come up with game plans to attack this defense. It's really the most singular innovation in defensive football in the last twenty years.

The 46 defense was an innovative defense with a unique defensive front, designed to confuse and put pressure on the opposing offense, especially their quarterback. Compared to a 4–3 base defense, the 46 dramatically shifts the defensive line to the weak side (the opposite end from the offense's tight end), with both guards and the center "covered" by the left defensive end and both defensive tackles. This front forced offenses to immediately account for the defenders lined up directly in front of them, making it considerably harder to execute blocking assignments such as pulling, trapping and pass protection in general. Moreover, the weak side defensive end would be aligned one to two yards outside the left offensive tackle, leaving the opposing tackle man-on-man when trying to block the pass rush.

Another key feature of the 46 is that both outside linebackers tend to play on the strong side of the formation. To avoid confusion, the strong and weak side linebackers (who are no longer lined up on opposite sides) are often renamed the 'Jack' and 'Charlie' linebackers, respectively. The linebackers line up behind the linemen somewhere between one and three yards from the line of scrimmage. The primary tactic is to rush between five and eight players on each play, either to get to the quarterback quickly or disrupt running plays, although dropping some players back into pass coverage after seemingly indicating that they will blitz (see zone blitzing) is another method of creating confusion. Ryan would use all of these rushers to out-man and overwhelm the offense. Another major key to the 46 is the ability of the cornerbacks to play man free and bump and run coverage. Bump and run can allow the defense to take away the quarterback's immediate decision-making ability, by disrupting the timing of short routes needed to make a quick throw to beat the 46 defense. [5]

The formation was very effective in the 1980s NFL because it often negated a team's running game and forced them to throw the ball. This was difficult for many teams at the time because most offensive passing games centered on the play-action pass, a situation that often favored the defense even further with the quarterback lined up to receive the snap from directly behind the center.

Currently, the 46 is rarely used in professional and college football. This is largely because of multiple receiver and spread formations. [4] The eight man line that the 46 presented was most effective against the two back, two wide receiver sets common in the 1980s.

A weakness of the 46 defense is that with eight defensive players lining up near the line of scrimmage and only three in the secondary, it leaves areas open for receivers to catch passes. Also, timed passes can be thrown before the players blitzing have a chance to reach the quarterback. When the Miami Dolphins gave the Bears their only loss of the 1985 season, Miami exploited these weaknesses with quarterback Dan Marino's quick release of the ball, and their receivers' ability to beat the one-on-one coverage of Chicago's cornerbacks. [6]

Another problem with the 46 defense is that most teams do not have enough impact players to run the 46 as effectively as the Bears and Ryan's other two major successes, the late 1980s Philadelphia Eagles for which he was head coach and the 1993 Houston Oilers for whom he was defensive coordinator, did. Those teams fielded some of the best front-seven defenses ever, and included such players as Jerome Brown, Mike Singletary, Steve McMichael, Richard Dent, Dan Hampton, Clyde Simmons, Reggie White, Otis Wilson, Seth Joyner, William Fuller, and Wilber Marshall.

In today's game, the 46 defense is often simplified to its main component of walking the strong safety up to the line of scrimmage as an eighth man in the box to help contain the run. Defenses today may also run safety blitzes and corner blitzes at crucial moments without committing wholly to the "46" defense. Up front, teams still use the concept of the "T-N-T" alignment, where two defensive ends are covering (lined up directly across from) the guards, and a nose tackle is covering the center. In the case of a zone-blocking scheme, this makes it difficult for the offensive linemen to reach any of the linebackers on the second level.

This is where defensive players would line up against a normal Pro Set offense. [7] 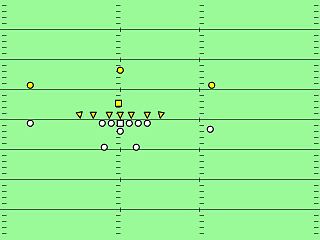 The 7–1–2–1, or seven-diamond defense, used seven "down linemen", or players on the line of scrimmage at the time of the snap, one linebacker, two safeties relatively close to the line and one safety farther downfield. The formation was created by Minnesota Golden Gophers coach Henry L. Williams in 1903, reputedly to stop Michigan back Willie Heston. By some accounts in the mid-1930s, the 7–1–2–1 was considered "almost obsolete" due to its weakness against the forward pass, whereas the 7–2–2 defense was still considered viable. Yet Bill Arnsparger notes the use of the seven-diamond from the 1940s into the 1960s, as a defensive adjustment to the common wide tackle 6 defenses of the time. Further, the form of the 7 diamond as derived from a wide tackle 6, with a more compact line spacing than the 1930s era 7 man lines, shows a marked similarity to the 46 defense of Buddy Ryan.