The 1963 NFL season was the 44th regular season of the National Football League. On April 17, NFL commissioner Pete Rozelle indefinitely suspended Green Bay Packers running back Paul Hornung and Detroit Lions defensive tackle Alex Karras for gambling on their own teams, as well as other NFL games; Hornung and Karras would miss the entire season. In addition, five other Detroit players were fined $2,000 each for placing bets on one game in which they did not participate.

The season ended with the Chicago Bears defeating the New York Giants at Wrigley Field in the NFL Championship Game.

Effects of the JFK assassination

In Week 11 on November 24, just two days after the assassination of President Kennedy, the NFL played its normal schedule of games. League commissioner Rozelle said about playing the games: "It has been traditional in sports for athletes to perform in times of great personal tragedy. Football was Mr. Kennedy's game. He thrived on competition." [4] Attendance at games went unaffected despite the assassination. [5] [6] Although the choice to play the games was protested, and Rozelle had also eventually regretted the decision, [7] he stated that Kennedy's press secretary, Pierre Salinger, had urged him to allow the games to be played. [8]

However, the Philadelphia Eagles and the Washington Redskins had sought postponement of the games. [9] [10] Eventually, the game between the two teams in Philadelphia saw acts of kindness from both sides. Before the game, each of the Eagles players contributed $50 to the family of Dallas Police Officer J.D. Tippit, who was killed by the assassin, Lee Harvey Oswald. [11] After the game ended, players on the Redskins asked Coach Bill McPeak to send the game ball to the White House, thanking Rozelle for allowing the games to be played that weekend, [11] saying that they were "playing...for President Kennedy and in his memory." [12]

No NFL games were telecast, since on the afternoon of the 22nd, just after the president had been pronounced dead, CBS President Frank Stanton ordered that all regular programming be pre-empted until after Mr. Kennedy was buried. Normal programming, including the NFL, was replaced by non-stop news coverage, broadcast without commercials.

Both conference races were undecided until the final games of the regular season. In the Eastern, the Browns were 7–1–0 after eight games, but on November 10, the Browns lost 9–7 at Pittsburgh, while the Giants beat the Eagles 42–14, to tie New York and Cleveland at 7–2–0. When the Giants won again and the Browns lost, the former had the lead.

The Week 11 games took place two days after the Kennedy assassination. Although the fourth-year American Football League (AFL) postponed its schedule, the NFL chose to play, although the games were not televised due to round-the-clock network TV coverage of the assassination aftermath. The Giants lost at home to St. Louis, 24–17, while Cleveland beat visiting Dallas 27–17, to give the three teams identical 8–3–0 records. The Bears were losing at Pittsburgh, until Roger Leclerc kicked a field goal to get a 17–17 tie, and to stay half a game ahead of Green Bay.

In Week 12, Green Bay's win was denied when the Lions tied the game 13–13 with a last-minute touchdown in Detroit on Thanksgiving Day, [15] while Chicago averted another loss by tying Minnesota 17–17 on Sunday. The three-way tie in the East was pared down when Cleveland beat St. Louis 24–10, and New York won 34–27 over Dallas.

Week 13 saw both the Bears and Packers winning, while Cleveland lost to Detroit, 38–10. New York won 44–14 over Washington, but at 10–3–0, New York was trailed by Pittsburgh, which had an unusual 7–3–3 record, and the final game of the season would match the Steelers and Giants at Yankee Stadium.

Under the rules of the day (ties discarded), a Pittsburgh win over the Giants would have resulted with New York at 10–4–0 (.714) and the Steelers at 8–3–3 (.727) and the trip to the championship game. [16] The Steelers had won the first meeting in Pittsburgh 31–0 on September 22. In a game that decided the conference title, New York beat Pittsburgh 33–17, and the Steelers fell to fourth in the East. [17]

In the Western race, Green Bay needed to win on the road and for Chicago to lose at home. The Packers played Saturday at Kezar Stadium in San Francisco and beat the league-worst 49ers, 21–17. The Bears' 24–14 win over Detroit at Wrigley Field on Sunday afternoon was announced to the Packers during their flight home, ending their pursuit of a third consecutive league title. [18]

Although the Packers' 11–2–1 record without Hornung was the second-best in the league and one of the best in their history, the two losses to Chicago kept them in second place in the West. Green Bay played in the consolation Playoff Bowl in Miami against East runner-up Cleveland on January 5. [19] [20]

The Playoff Bowl was between the conference runners-up, for third place in the league. This was its fourth year and it was played a week after the title game. 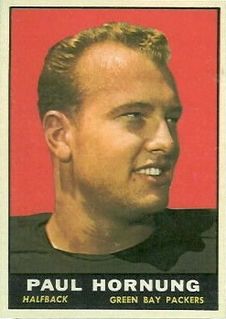 Michael John Tomczak is a former American football player. Tomczak played quarterback for several NFL teams from 1985 through 1999, including the Chicago Bears, the Green Bay Packers, the Cleveland Browns, and the Pittsburgh Steelers. He was the offensive coordinator for the Pittsburgh Power of the Arena Football League until 2014 when they ceased operations. He is of Polish descent.

The 1964 NFL season was the 45th regular season of the National Football League. Before the season started, NFL commissioner Pete Rozelle reinstated Green Bay Packers running back Paul Hornung and Detroit Lions defensive tackle Alex Karras, who had been suspended for the 1963 season due to gambling.

The 1961 NFL season was the 42nd regular season of the National Football League (NFL). The league expanded to 14 teams with the addition of the Minnesota Vikings, after the team's owners declined to be charter members of the new American Football League. The schedule was also expanded from 12 games per team to 14 games per team where it would stay for 16 years. The Vikings were placed in the Western Conference, and the Dallas Cowboys were switched from the Western Conference to the Eastern. The addition of the Vikings returned the NFL to an even number of teams.

The 1938 NFL season was the 19th regular season of the National Football League. The season ended when the New York Giants defeated the Green Bay Packers in the NFL Championship Game.

The 1941 NFL season was the 22nd regular season of the National Football League. Before the season, Elmer Layden was named the first Commissioner of the NFL, while Carl Storck resigned as league president. Layden also took on the duties of president and signed a five-year contract at $20,000 annually.

The 1950 NFL season was the 31st regular season of the National Football League. The merger with the All-America Football Conference (AAFC) expanded the league to 13 teams. Meanwhile, television brought a new era to the game. The Los Angeles Rams became the first NFL team to have all of its games – both home and away – televised. The Washington Redskins became the second team to put their games on TV. Other teams arranged to have selected games televised.

The 1952 NFL season was the 33rd regular season of the National Football League. Prior to the season, the legacy of the Dayton Triangles, the final remaining Ohio League member and the franchise then known as the New York Yanks owner Ted Collins sold his team back to the NFL. A few days later, a new team was then awarded to an ownership group in Dallas, Texas, after it purchased the assets of the Yanks.

The 1963 Green Bay Packers season was their 45th season overall and their 43rd season in the National Football League. The two-time defending NFL champions finished with an 11–2–1 record under fifth-year head coach Vince Lombardi for a second-place finish in the Western Conference, a half game back.

The 1963 National Football League Championship Game was the 31st annual championship game, played on December 29 at Wrigley Field in Chicago, Illinois. The game pitted the visiting New York Giants (11–3) of the Eastern Conference against the Chicago Bears (11–1–2) of the Western Conference.

The NFL, along with boxing and professional wrestling, was a pioneer of sports broadcasting during a time when baseball and college football were more popular than professional football. Due to the NFL understanding television at an earlier time, they were able to surpass Major League Baseball in the 1960s as the most popular sport in the United States.