Twenty teams competed in the NFL during the 1925 season.

Controversy surrounds who actually won the 1925 NFL Championship. Officially, the Chicago Cardinals are listed as the 1925 NFL champions because they finished with the best record; however, many Pottsville fans at the time claimed that the Maroons were the legitimate champions. The Maroons and the Cardinals were the top contenders for the title, with Pottsville winning a late-season meeting between them, 21–7. But the Maroons scheduled a game against a team of University of Notre Dame All-Stars in Philadelphia (and winning 9–7) on the same day that the Frankford Yellow Jackets were scheduled to play a game in the same city. Frankford protested, saying that it was violating their protected territory rights.

Although NFL president Joe Carr warned the Maroons in writing that they faced suspension if they played in Philadelphia, the Maroons claimed that Carr had previously approved the game during a telephone call, and played anyway. In response, Carr fined the club, suspended it from all league rights and privileges (including the right to play for the NFL championship), and returned its franchise to the league.

In 2003, the NFL decided to again examine the case regarding the 1925 championship. In October of that year, the NFL voted 30–2 not to reopen the case, with only Philadelphia and Pittsburgh, the league's two Pennsylvania-based teams, voting in favor. Thus, the Cardinals are still listed as the 1925 NFL champions. [1]

Had the current (post-1972) system of counting ties as half a win and half a loss been in place in 1925, the Maroons would have won the championship with a win percentage of .833, while the Cardinals would have finished runner-up at .821.

Note: Tie games were not officially counted in the standings until 1972.
* The Pottsville Maroons were suspended from the league in December, resulting in the Chicago Cardinals being named the NFL champions. 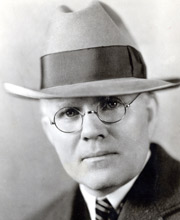 Joseph Francis Carr was an American sports executive in American football, baseball, and basketball. He is best known as the president of the National Football League from 1921 until 1939. He was also one of the founders and president of the American Basketball League (ABL) from 1925 to 1927. He was also the promotional director for Minor League Baseball's governing body from 1933 to 1939, leading an expansion of the minor leagues from 12 to 40 leagues operating in 279 cities with 4,200 players and attendance totaling 15,500,000.

The 1929 NFL season was the tenth regular season of the National Football League. The league increased back to 12 teams with the addition of the Staten Island Stapletons, Orange Tornadoes and Minneapolis Red Jackets and the re-entry of the Buffalo Bisons. The Pottsville Maroons became the Boston Bulldogs, the New York Yankees folded, and the Detroit Wolverines merged into the New York Giants, with the Giants the surviving partner.

The Philadelphia Quakers were a professional American football team that competed in the first American Football League in 1926 and won the league’s only championship.

Francis Dale "Hap" Moran was a collegiate and professional American football player. He played mainly at halfback for Carnegie Tech (1922), Grinnell College (1923–1925), the Frankford Yellow Jackets (1926), the Chicago Cardinals (1927), the Pottsville Maroons (1928), and the New York Giants (1929–1933). When he retired from the NFL in 1933, he held the league records for the longest run from scrimmage and most yards receiving in a single game. His 91-yard run remained a New York Giants record for 75 years until it was broken by Tiki Barber on December 31, 2005.

The 1925 Chicago Bears season was their sixth regular season completed in the National Football League. The team was unable to improve on their 6–1–4 record from 1924 and finished with a 9–5–3 record under head coach George Halas earning them a seventh-place finish in the team standings, their worst showing to that date. However, the 1925 Bears were the most notable team in the young NFL's history to that point all because of the addition of college players, including Red Grange. 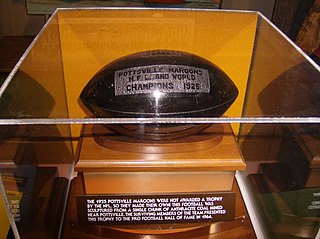 The 1925 National Football League (NFL) Championship, claimed by the Chicago Cardinals, has long been the subject of controversy. The controversy centers on the suspension of the Pottsville Maroons by NFL commissioner Joseph Carr, which prevented them from taking the title.

The 1925 New York Giants season was the franchise's inaugural season in the National Football League. The team finished with a record of 8–4 against league opponents.

The 1927 New York Giants season was the franchise's 3rd season in the National Football League, and first under head coach Earl Potteiger. The Giants suffered their only loss and sole tie to the Cleveland Bulldogs. They were ranked first in yards allowed, yards gained, and points allowed, and were second in points scored. Over the entire season, the Giants scored 197 points and allowed 20. The team was led in scoring by fullback Jack McBride who scored 57 points, with six rushing touchdowns, two field goals, and 15 extra points. They then lost an exhibition game on December 26, 1927, in Oklahoma to Otto and Ira Hamilton's Hominy Indians, 13–6.

The 1925 Chicago Cardinals season resulted in the Cardinals winning their first NFL championship. The 1925 championship is contested and never awarded by the NFL after the Pottsville Maroons were suspended.

The 1925 Frankford Yellow Jackets season was their second in the National Football League. The team improved on their previous output of 11–2–1, winning thirteen league games to finish the season in sixth place. The team's overall record, against league and non-league opponents in 1925 was 15–7. They set the unofficial record for most games played in a season during the years before the league went to a fixed-length schedule: they played 20 NFL games Even counting playoff games, no NFL team has since played more than 20 games in a season.

The 1925 Milwaukee Badgers season was their fourth in the National Football League. The team failed to improve on their previous league record of 5–8, losing all their games. They tied for sixteenth place in the league.

The 1925 Rochester Jeffersons season was their sixth and final season in the National Football League. The team improved on their previous record against league opponents of 0–7, losing only six games and logging a tie. They tied for sixteenth in the league.

Christopher O'Brien was a Chicago, Illinois house painter and plumber who became a pro football franchise owner. He is mostly known as the owner of the Chicago Cardinals, and has been called the "Father of Professional Football in Chicago". O'Brien was also a co-founder of the American Professional Football Association by representing the Cardinals at the September 17, 1920, league meeting at Ralph Hay's Hupmobile dealership in Canton, Ohio.

The professional American football team now known as the Arizona Cardinals previously played in Chicago, Illinois, as the Chicago Cardinals from 1920 to 1959 before relocating to St. Louis, Missouri, for the 1960 season.