The 1968 NFL season was the 49th regular season of the National Football League. Per the agreement made during the 1967 realignment, the New Orleans Saints and the New York Giants switched divisions; the Saints joined the Century Division while the Giants became part of the Capitol Division.

The season ended when the Baltimore Colts defeated the Cleveland Browns in the NFL Championship Game, only to be defeated by the American Football League's New York Jets in Super Bowl III 16–7 at the Orange Bowl in Miami. Subsequently, it was the first time in the history of professional football in which the NFL champion was not crowned as the world champion. One year later, this feat would be repeated, as the AFL champion Kansas City Chiefs defeated the NFL champion Minnesota Vikings in Super Bowl IV.

The 1968 NFL/AFL Draft, the first time that both leagues conducted a combined common draft, was held January 30–31, 1968, at New York City's Belmont Plaza Hotel. With the first pick, the Minnesota Vikings selected offensive tackle Ron Yary from the University of Southern California.

The Eastern Conference was split into the Capitol and Century Divisions, and the Western Conference had the Coastal and Central Divisions. In the past, if two teams were tied for the division lead at season's end, a one-game playoff was conducted to break the tie. Starting in 1967, a tiebreaking system was implemented that started with net points in head-to-head competition, followed by the team that had less recently played in a title game. As such, only one team in a division would be the division winner, even if the won-lost record was the same.

For the second straight season, the Colts and Rams waged a tight season long battle for the Coastal Division title. In 1967, the Rams defeated the Colts in the season's final game to claim the title. They appeared headed for a similar showdown in 1968 (they were scheduled to face each other in the season finale in L.A.), as the Rams entered week 13 with a 10-1-1 record while the Colts were 11-1-0. But in the next to last game, the Rams were upset by the Chicago Bears 17-16 in what was known as "the lost down game." The biggest play in the game came when the Rams completed a second down pass to get into field goal range in the final minute, but the play was wiped out by a holding penalty. It should have remained second down due to the Bears accepting the penalty on the Rams, but the referees forgot to reset the down marker. After two incomplete passes, the Rams lined up for a fourth down attempt, but the referees waived the Bears offense onto the field on a change of possession; the Bears ran out the clock and the Colts (who had already won earlier in the day) clinched the division. In the now-meaningless season finale, the Colts won 28-24.

In an upset, the New York Jets, league champion of the 1968 American Football League season, defeated the Baltimore Colts, 16–7, at Orange Bowl in Miami, on January 12, 1969.

The Playoff Bowl was a post-season game for third place in the National Football League (NFL), played ten times following the 1960 through 1969 seasons, all at the Orange Bowl in Miami, Florida. 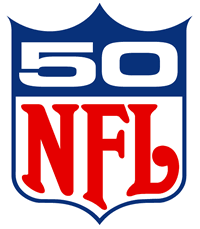 The 1969 NFL season was the 50th regular season of the National Football League, and its last before the AFL-NFL Merger. To honor the NFL's fiftieth season, a special anniversary logo was designed and each player wore a patch on their jerseys with this logo throughout the season.

The 1967 NFL season was the 48th regular season of the National Football League. The league expanded to 16 teams with the addition of the New Orleans Saints.

This article details the history of the New Orleans Saints, an American football who play in the NFL, which was organized in 1967 and is based in New Orleans, Louisiana.

The 1969 Los Angeles Rams season was the team's 32nd year with the National Football League and the 24th season in Los Angeles. This season saw the Rams attempting to improve on their 10-3-1 record from 1968, in which they barely missed the playoffs by a game. The Rams improved on that record by a mere game, finishing 11-3 and winning the Coastal Division and qualifying for the playoffs. However, in their first playoff game, they lost a close battle with the Minnesota Vikings 23-20 in the conference playoff game. They would remain the only team in NFL history to go 11-0 and lose three consecutive games afterwards until it came time for the Steelers in 2020 to do the same thing.

The 1967 Los Angeles Rams season was the team's 30th year with the National Football League and the 22nd season in Los Angeles. Under second-year head coach George Allen, the Rams had a regular season record of 11–1–2, tied for the best in the league, and won the Coastal Division title. It was their first playoff appearance since 1955.

The 1969 American Football League season was the tenth and final regular season of the American Football League (AFL). To honor the AFL's tenth season, a special anniversary logo was designed and each Kansas City Chiefs player wore a patch on his jersey with the logo during Super Bowl IV, the final AFL-NFL World Championship Game prior to the AFL–NFL merger.

The 1968 Baltimore Colts season was the 16th season for the team in the National Football League. Led by sixth-year head coach Don Shula, they finished the regular season with a record of 13 wins and 1 loss, and won the Western Conference's Coastal division.