Last updated July 06, 2021
Unit of play in baseball, softball, and other similar games
This article is about the baseball term. For other uses, see Inning (disambiguation).

In baseball, softball, and similar games, an inning is the basic unit of play, consisting of two halves or frames, [1] the "top" (first half) and the "bottom" (second half). In each half, one team bats until three outs are made, with the other team playing defense. [2] A full baseball game is typically scheduled for nine innings, while softball games consist of seven innings; although this may be shortened due to weather or extended if the score is tied at the end of the scheduled innings. The use of the term inning in baseball and softball contrasts with cricket and rounders, in which the term is innings in both singular and plural.

Each half-inning formally starts when the umpire calls "Play" or "Play ball". A full inning consists of six outs, three for each team; and, in Major League Baseball and most other adult leagues, a regulation game consists of nine innings. The visiting team bats in the first half-inning, the top of the inning, derived from the position of the visiting team at the top line of a baseball line score. The home team's half of an inning is the bottom of the inning, and the break between halves of an inning is the middle of the inning. If the home team is leading in the middle of the final scheduled inning, or scores to take the lead in the bottom of the final scheduled inning, the game immediately ends in a home victory.

In most leagues, if the score is tied after the final scheduled inning, the game goes into extra innings until an inning ends with one team ahead of the other. In Japanese baseball, however, games end if tied after 12 innings (or, in postseason play in Nippon Professional Baseball, 15 innings). For the 2011 and 2012 NPB season, a game also ended in a tie if a regular-season game has reached its 3-hour, 30-minute time limit, and both teams are tied. As in the case of the ninth inning, a home team which scores to take a lead in any extra inning automatically wins, and the inning (and the game) is considered complete at that moment regardless of the number of outs. This is commonly referred to as a "walk-off" situation since the last play results in the teams walking off the field because the game is over. However, road teams can't earn a "walk-off" victory by scoring the go-ahead run in extra innings, unlike in ice hockey where the team (either home or away) scoring first in overtime automatically wins.

A baseball game can be shorter than scheduled innings if it is interrupted by rain (or other bad weather). Such a game called a rain out, is often preceded by a rain delay, a pause in the game during which the umpires will try to determine if the weather will allow the game to continue. If so, the game will simply be delayed until the rain stops, and then play will resume. If not, the umpires will announce a rainout and play will be suspended for the day. The game may have to be replayed in its entirety at a later date, but under certain circumstances, a game shortened because of rain can count as an official game, and the team that was ahead at the time the game was called will be awarded the win. See the article on rainout (sports) for further details. [3]

In US English, baseball terminology is sometimes found in non-sports usage in a tense situation: "it's the bottom of the ninth [inning]" (sometimes adding, "with two outs"), meaning "there isn't much time to turn things around here".

While inning is the standard baseball term, there is at least one literary instance, of innings being used in a baseball context. This occurs in the story "Baseball Hattie" by Damon Runyon, who refers to the seventh innings of a Phillies-Giants game. 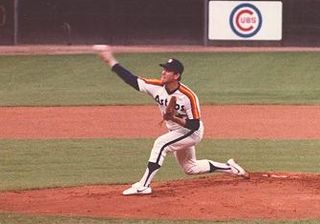 In baseball, a no-hitter is a game in which a team was not able to record a single hit through conventional means. Major League Baseball (MLB) officially defines a no-hitter as a completed game in which a team that batted in at least nine innings recorded no hits. A pitcher who prevents the opposing team from achieving a hit is said to have "thrown a no-hitter". In most cases, no-hitters are recorded by a single pitcher who throws a complete game; one thrown by two or more pitchers is a combined no-hitter.

In rare cases, baseball games are forfeited, usually when a team is no longer able to play. In the event of forfeiture, the score is recorded as 9–0, as stated in rule 2.00 of the Major League Baseball Rules Book. The 9–0 score equates to the number of innings in a regulation game. Actual game statistics are recorded as they stand at the time of the forfeit; the game is recorded as a loss in the standings for the forfeiting team and a win for the other team, even if the forfeiting team is ahead at that point.

Rainout, washout, rain delay, and rain stopped play are terms regarding an outdoor event, generally a sporting event, delayed or canceled due to rain, or the threat of rain. It is not to be confused with a type of out in baseball, though a baseball game can be rained out. Delays due to other forms of weather are named "snow delay", "lightning delay", "thunderstorm delay", or "fog delay", while there are many other effects of weather on sport. Also, a night game can be delayed if the floodlight system fails. Often spectators will be issued a ticket for a make up event, known as a "rain check".

A doubleheader is a set of two baseball games played between the same two teams on the same day in front of the same crowd. In addition, the term is often used unofficially to refer to a pair of games played by a team in a single day, but in front of different crowds and not in immediate succession.

A suspended game in baseball occurs when a game has to be stopped before it can be completed, and the game is meant to be finished at a later time or date. Suspended games are used in Major League Baseball, Minor League Baseball, and may also be used at other levels of play depending on league or tournament rules.

The 2008 World Series was the championship series of Major League Baseball's (MLB) 2008 season. The 104th edition of the World Series, it was a best-of-seven playoff between the National League (NL) champion Philadelphia Phillies and the American League (AL) champion Tampa Bay Rays; the Phillies won the series, four games to one. The 2008 World Series is notable because it is the only Fall Classic to involve a mid-game postponement and resumption.

The 1988 Philadelphia Phillies season was a season in Major League Baseball. The Phillies finished sixth in the National League East with a record of 65 wins and 96 losses.

The 2009 American League Central tie-breaker game was a one-game extension to Major League Baseball's (MLB) 2009 regular season, played between the Detroit Tigers and Minnesota Twins to determine the champion of the American League's (AL) Central Division. It was played at the Hubert H. Humphrey Metrodome in Minneapolis, Minnesota, on October 6, 2009. The Twins won the game 6–5 in 12 innings and advanced to the 2009 AL Division Series where they were swept by the New York Yankees; the Tigers failed to qualify for the postseason.

The 2010–11 Australian Baseball League regular season was held from 6 November 2010 through to 22 January 2011. All six teams competed in a double round-robin format, playing each other team in two series of four games each, totalling 40 games played each. The top four teams progressed to the postseason. The winner of the championship series will be awarded the Claxton Shield.

The 1959 National League tie-breaker series was a best-of-three playoff series at the conclusion of Major League Baseball's (MLB) 1959 regular season to decide the winner of the National League (NL) pennant. The playoff series was necessary after Los Angeles Dodgers and the Milwaukee Braves finished the season with identical win–loss records of 86–68 (.558) on Sunday, September 27, three games ahead of the San Francisco Giants. It was the first tie-breaker in the majors in eight years, also in the National League.

The 1925 Colored World Series was the second edition of the championship series in Negro league baseball. The series featured a rematch between the Hilldale Club of Darby, Pennsylvania, champion of the Eastern Colored League (ECL), and the Kansas City Monarchs, champion of the Negro National League (NNL) and winner of the previous year's match in the first Colored World Series. In 1925, Hilldale won the best-of-nine series, five games to one.

The 2017 National Invitational Softball Championship (NISC) began on May 16, 2017 and concluded on May 24. The Liberty University Lady Flames defeated the Lamar University Lady Cardinals in a controversial rain-shortened two-game final on Liberty's home.field in Lynchburg, Virginia.

The 2020 Chicago Cubs season was the 149th season of the Chicago Cubs franchise, the 145th in the National League and the Cubs' 105th season at Wrigley Field. The Cubs were managed by David Ross, in his first year as Cubs manager, and played their home games at Wrigley Field as members of Major League Baseball's National League Central Division. The Cubs opened the season on July 24 against the Milwaukee Brewers and finished the season on the road against the Chicago White Sox.