In gridiron football, a quick kick is any punt made under conditions such that the opposing team "should not" expect a punt. Typically this has been a kick from scrimmage from a formation that is, or resembles, one usually used other than for punting, or at least not resembling the one usually used for punting. Typically it will also be on some down before last down (last down being third in Canadian, and, since 1912, fourth in American football), unless done from a formation usually used for place kicking.

The purpose of a quick kick is the same as that for all punting, but with the additional plan of:

The disadvantages (required for the punt to be unexpected) are one or more of these:

If a team uses the quick kick a lot, surprise can be maintained only by their also having a fake quick kick play. One type of such play is the equivalent of the Statue of Liberty play for the forward pass: the ostensible punter holds the ball out as if to drop it, then hands it to a teammate stepping behind or in front of them.

A quick kick is usually done from closer to the line of scrimmage than an ordinary punt. For approximately the decade of the 1910s in American football, the rules discouraged the quick kick by requiring that the ball be kicked from at least five yards behind the line of scrimmage. Because of the closeness of the opposing team, the approach the kicker uses before dropping the ball for a quick kick is often designed to decrease the distance forward that the punter will step, or to reduce the time of the approach. One such technique is the "rocker step", in which the punter first steps backward and then rocks forward. Another is to take a somewhat sideways approach, leaning and kicking somewhat "across the body"; for a right-footed kicker this means approaching toward the right while leaning left.

A quick kick made relatively close to the opposing goal line is often executed by a technique called a "pooch punt", which is a more controlled kick. A typical last down punt or a punt taken as a free kick is done with the emphasis mostly on maximizing distance.

Quick kicks are relatively rare in American football, but they have never completely disappeared. Notable quick kicks in college football include one performed by Tate Forcier of the University of Michigan against the University of Notre Dame on September 12, 2009, [1] and a 54-yard punt by Kellen Moore of Boise State University against Louisiana Tech on October 26, 2010. [2]

In the NFL, quarterback Randall Cunningham made 20 quick kicks during his career. [3] Ben Roethlisberger has five quick kicks for a career net average of 24.2 yards per kick, two of which went for touchbacks. [4] New England Patriots quarterback Tom Brady performed a quick kick punt on a third and ten against the Denver Broncos in the divisional round of the AFC playoffs, on January 14, 2012. [5]

Quick kicks were a much more frequent occurrence in the XFL during its lone season in 2001. This was because the XFL permitted kicking teams to recover and advance their own punts provided they travelled a minimum of 25 yards. XFL teams usually attempted quick kicks in third and long situations. 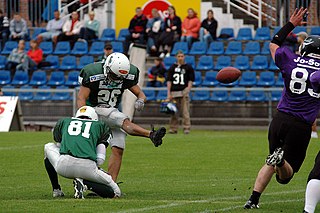 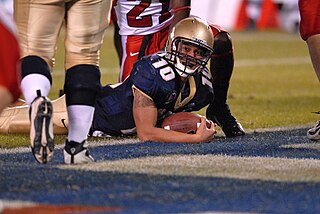 A coffin corner refers to the corner of the playing field in American football just in front of the end zone, usually from the 5-yard line to the goal line. A perfect coffin corner kick is one that goes out of bounds just before either orange pylon located in the front of the end zone. The punter tries to place the ball so that it lands out of bounds or is downed on the field by another member of the kicking team anywhere inside the 5-yard line without touching the goal line, thus forcing difficult field position for the receiving team on their next scrimmage.