The Red Book of Hergest (Welsh : Llyfr Coch Hergest), Oxford, Jesus College, MS 111, is a large vellum manuscript written shortly after 1382, which ranks as one of the most important medieval manuscripts written in the Welsh language. It preserves a collection of Welsh prose and poetry, notably the tales of the Mabinogion and Gogynfeirdd poetry. The manuscript derives its name from the colour of its leather binding and from its association with Hergest Court between the late 15th and early 17th century.

According to scholar Daniel Huws, it is "by far the heaviest of the medieval books in Welsh, the largest in its dimensions...and the thickest". [1]

The manuscript appears to have been retained by Hopcyn's family until the end of the 15th century, when Hopcyn's grandson Hopcyn ap Rhys was held complicit in the rebellion against King Edward IV and consequently saw much of his property forfeited. The Vaughans of Tretower (Tretŵr), then in Breconshire, obtained it, probably in 1465 on receiving Hopcyn's forfeited possessions. [2] Ownership is suggested by two odes ( awdlau ) dedicated to Sir Thomas Vaughan (d. 1483) and his sons, which were written into the manuscript by Welsh poet Lewys Glyn Cothi at Tretower. [3] The Red Book soon passed into the possession of the Vaughans of Hergest Court, near Kington in the Welsh Marches. Sir John Price of Brecon reports to have seen the manuscript in 1550, presumably at Hergest. [3] In the late 1560s, William Salesbury found the manuscript in the possession of Sir Henry Sidney at Ludlow, when Siancyn Gwyn of Llanidloes held it on loan from him. [2]

By the early 17th century, the Red Book had passed to the Mansels of Margam, hence back in Glamorgan. It was possibly brought into the marriage between Henry's granddaughter Catherine Sidney and Sir Lewis Mansel, who is reported to have owned it in 1634. [2] The manuscript was later found in the collection of Thomas Wilkins (d. 1699), a Welsh clergyman and antiquarian, who may have borrowed it from the Mansels without ever returning it. In 1697, Wilkins was visited by Edward Lhuyd who spent some time copying a manuscript which might well have been the Red Book.

In 1701, two years after Wilkin's death, his son Thomas Wilkins the Younger donated the manuscript to Jesus College, Oxford. [2] Internal evidence, a note by the latter Wilkins, suggests that Edward Lhuyd then held the manuscript on loan, but that the college was able to retrieve it only 13 years later, after Lhuyd's death. [2] [3] The book was given on 17 February 1701 to Jesus College by Reverend Thomas Wilkins the younger of Llanblethian. The college keeps the manuscript on deposit at the Bodleian Library. [4]

The first part of the manuscript contains prose, including the Mabinogion , for which this is one of the manuscript sources, other tales, historical texts (including a Welsh translation of Geoffrey of Monmouth's Historia Regum Britanniae ), and various other texts including a series of Triads. The rest of the manuscript contains poetry, especially from the period of court poetry known as Poetry of the Princes (Welsh: Gogynfeirdd or Beirdd y Tywysogion), including the cycles Canu Llywarch Hen , Canu Urien , and Canu Heledd . It contains also poems by Myrddin Wyllt. The Red Book is similar in content to the White book of Rhydderch, of which it has at times been supposed to be a copy. Both are now thought, however, to descend from a lost common ancestor or ancestors. [5]

The manuscript also contains a collection of herbal remedies associated with Rhiwallon Feddyg, founder of a medical dynasty that lasted over 500 years – 'The Physicians of Myddfai' from the village of Myddfai just outside Llandovery.

Some researchers believe that J. R. R. Tolkien borrowed the title for the Red Book of Westmarch , the imagined legendary source of Tolkien's tales. [6]

The Red Book of Hergest has been cited as one of the important Welsh artefacts for return to Wales, from England. [7]

Wikimedia Commons has media related to Red Book of Hergest .

The Mabinogion are the earliest Welsh prose stories, and belong to the Matter of Britain. The stories were compiled in Middle Welsh in the 12th–13th centuries from earlier oral traditions. There are two main source manuscripts, created c. 1350–1410, as well as a few earlier fragments. The title covers a collection of eleven prose stories of widely different types, offering drama, philosophy, romance, tragedy, fantasy and humour, and created by various narrators over time. There is a classic hero quest, "Culhwch and Olwen"; a historic legend in "Lludd and Llefelys," complete with glimpses of a far off age; and other tales portray a very different King Arthur from the later popular versions. The highly sophisticated complexity of the Four Branches of the Mabinogi defies categorisation. The stories are so diverse that it has been argued that they are not even a true collection.

The Welsh Triads are a group of related texts in medieval manuscripts which preserve fragments of Welsh folklore, mythology and traditional history in groups of three. The triad is a rhetorical form whereby objects are grouped together in threes, with a heading indicating the point of likeness; for example, "Three things not easily restrained, the flow of a torrent, the flight of an arrow, and the tongue of a fool."

The White Book of Rhydderch is one of the most notable and celebrated surviving manuscripts in Welsh. Mostly written in southwest Wales in the middle of the 14th century it is the earliest collection of Welsh prose texts, though it also contains some examples of early Welsh poetry. It is now part of the collection of the National Library of Wales, having been preserved in the library at Hengwrt, near Dolgellau, Gwynedd, of the 17th century antiquary Robert Vaughan, who inherited it from the calligrapher John Jones and passed it to his descendants. The collection later passed to the newly established National Library of Wales as the Peniarth or Hengwrt-Peniarth Manuscripts.

Medieval Welsh literature is the literature written in the Welsh language during the Middle Ages. This includes material starting from the 5th century AD, when Welsh was in the process of becoming distinct from Common Brittonic, and continuing to the works of the 16th century. 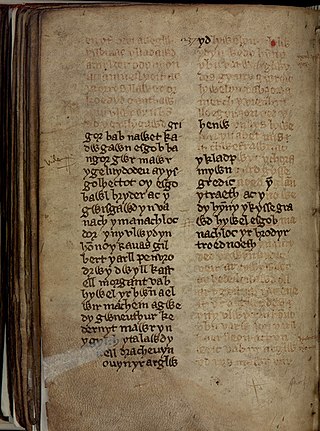 Brut y Tywysogion is one of the most important primary sources for Welsh history. It is an annalistic chronicle that serves as a continuation of Geoffrey of Monmouth’s Historia Regum Britanniae. Brut y Tywysogion has survived as several Welsh translations of an original Latin version, which has not itself survived. The most important versions are the one in Robert Vaughan's Peniarth MS. 20 and the slightly less complete one in the Red Book of Hergest. The version entitled Brenhinoedd y Saeson combines material from the Welsh annals with material from an English source.

The Four Branches of the Mabinogi or Pedair Cainc Y Mabinogi are the earliest prose stories in the literature of Britain. Originally written in Wales in Middle Welsh, but widely available in translations, the Mabinogi is generally agreed to be a single work in four parts, or "branches." The interrelated tales can be read as mythology, political themes, romances, or magical fantasies. They appeal to a wide range of readers, from young children to the most sophisticated adult. The tales are popular today in book format, as storytelling or theatre performances; they appear in recordings and on film, and continue to inspire many reinterpretations in artwork and modern fiction.

Peredur son of Efrawg is one of the Three Welsh Romances associated with the Mabinogion. It tells a story roughly analogous to Chrétien de Troyes' unfinished romance Perceval, the Story of the Grail, but it contains many striking differences from that work, most notably the absence of the French poem's central object, the grail.

Ynystawe is a village in the City and County of Swansea, Wales, and in the electoral ward of Morriston. It is 0.5 miles (1 km) north of the M4 motorway junction 45 between Ynysforgan and Clydach in the Swansea Valley. The Welsh name Ynystawe or Ynysdawe derives from ynys, meaning "island" or "river-meadow", and Tawe, the name of the river running immediately to the east and which gives the Welsh name of Swansea, Abertawe.

Brenhinoedd y Saeson is the medieval title of three Middle Welsh annalistic chronicles known from three 14th-century manuscripts recording events from 682 to the English conquest of Wales in 1282. The title Brenhinoedd y Saeson is found only in the rubric to the earlier of the two surviving manuscripts of version S: the other two texts are commonly known as Brut y Tywysogion, but this title is found only in manuscripts of the late 16th century and cannot be considered authentic.

Thomas Wilkins was a Welsh cleric and antiquarian, who collected Welsh manuscripts. 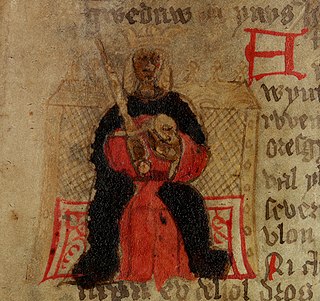 Brut y Brenhinedd is a collection of variant Middle Welsh versions of Geoffrey of Monmouth's Latin Historia Regum Britanniae. About 60 versions survive, with the earliest dating to the mid-13th century. Adaptations of Geoffrey's Historia were extremely popular throughout Western Europe during the Middle Ages, but the Brut proved especially influential in medieval Wales, where it was largely regarded as an accurate account of the early history of the Celtic Britons.

The White Book of Hergest was an important Welsh manuscript compiled in c. 1450. It contained many Welsh poems and prose texts and was a significant source for several antiquaries of the 17th and 18th centuries, but disappeared in the early 19th century, probably being destroyed in a fire in a London bookbinder's shop in around 1810.

Henwen, meaning "Old White", is in Welsh legend a sow which according to the Welsh Triads gave birth to Cath Palug, a monstrous cat depicted as combating with either Cai or King Arthur of Arthurian Legends.

Peniarth 20 is an early Welsh manuscript, written on parchment, that is part of the Peniarth collection in the National Library of Wales. It is also known as the Chronicle of the Princes because it contains an important version of the chronicle Brut y Tywysogion. Daniel Huws, the leading authority on Welsh manuscripts, has argued that the majority of Peniarth 20 dates from circa 1330. A date around the 15th century had previously been offered by J. Gwenogvryn Evans.

Canu Llywarch Hen are a collection of early Welsh englyn-poems. They comprise the most famous of the early Welsh cycles of englynion about heroes of post-Roman North Britain.

Canu Heledd are a collection of early Welsh englyn-poems. They are rare among medieval Welsh poems for being set in the mouth of a female character. One prominent figure in the poems is Heledd's dead brother Cynddylan.

Cyfoesi Myrddin a Gwenddydd ei Chwaer is an anonymous Middle Welsh poem of uncertain date consisting of 136 stanzas, mostly in englyn form. Myrddin, the legendary 6th-century North British bard and warrior, is depicted as being encouraged by his sister Gwenddydd to utter a series of prophecies detailing the future history of the kings of Gwynedd, leading up to an apocalyptic ending. The mood of the poem has been described as "one of despair and of loss of faith and trust in this world".