A regional park can be a special park district covering a region crossing several jurisdiction boundaries, or a park system of a single jurisdiction, such as a province, county, or city.

There are 101 regional parks in Saskatchewan. All parks are operated by volunteer boards.

Regional parks in Italy are administered by each region in Italy, a government unit like a U.S. state.

In New Zealand, regional parks are administered by regional councils rather than the Department of Conservation or territorial authorities.

In the United States, a regional park is sometimes referred to as a 'Metropolitan Park (Metropark)' or as an open space reserve. The terms region and metropolitan can have different meanings in U.S. local government agencies. Regional parks can be administered by a regional park board, a state, county or other units of local government. A special authority can be set up, under the joint jurisdiction of two or more government bodies or as an independent park district to administer parks. Individual parks may or may not cross governmental boundaries. The park district holds the authority, similar to fire protection districts, to manage and raise taxes to cover park acquisition and management costs.

See also: List of county and regional parks in Minnesota

Examples of large regional park systems are the Huron-Clinton Metroparks in southeast Michigan; and the Three Rivers Park District in Minnesota. In Ohio, under Ohio Revised Code Chapter 1545, metro parks such as the Columbus and Franklin County Metro Parks can have their own sworn police forces (rangers); The Cleveland Metroparks, Toledo Metroparks, and Dayton Five Rivers Metroparks are also in the state.

In Scotland, regional parks are defined to co-ordinate the management of areas of attractive countryside that are of importance for recreation due to their proximity to population centres. The parks have been defined and are managed by local authorities. Currently Scotland has three regional parks: [1]

An urban growth boundary, or UGB, is a regional boundary, set in an attempt to control urban sprawl by, in its simplest form, mandating that the area inside the boundary be used for urban development and the area outside be preserved in its natural state or used for agriculture. Legislating for an "urban growth boundary" is one way, among many others, of managing the major challenges posed by unplanned urban growth and the encroachment of cities upon agricultural and rural land. 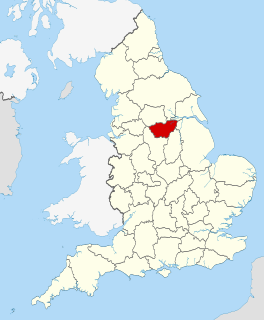 South Yorkshire is a ceremonial county and metropolitan county in England. It is the southernmost county in the Yorkshire and the Humber region and had a population of 1.34 million in 2011. It has an area of 1,552 square kilometres (599 sq mi) and consists of four metropolitan boroughs, Barnsley, Doncaster, Rotherham and Sheffield. South Yorkshire was created on 1 April 1974 as a result of the Local Government Act 1972. Its largest settlement is Sheffield.

The Metropolitan Council, commonly abbreviated Met Council or Metro Council, is the regional governmental agency and metropolitan planning organization in Minnesota serving the Twin Cities seven-county metropolitan area, accounting for over 55 percent of the state's population. The Met Council is granted regional authority powers in state statutes by the Minnesota Legislature. These powers are unique in that unlike the Regional Development Commissions they can supersede decisions and actions of local governments. The legislature created the Metro Council to maintain public services, oversee growth of the state's largest metro area and to act as the regional planning organization. Like the Metro in Portland, Oregon, it also administers an urban growth boundary.

Metro is the regional government for the Oregon portion of the Portland metropolitan area. It is the only directly elected regional government and metropolitan planning organization in the United States. Metro is responsible for managing the Portland region's solid waste system, coordinating the growth of the cities in the region, managing a regional parks and natural areas system, and overseeing the Oregon Zoo, Oregon Convention Center, Portland's Centers for the Arts, and the Portland Expo Center. It also administers the Regional Illegal Dumping Patrol or RID Patrol which is tasked with cleaning up illegal dumping and it is the designated point of contact for citizens to report illegal dumping in the Portland metro area.

The Huron–Clinton Metroparks system is a regional park system in Metro Detroit in the U.S. state of Michigan. The park system includes 13 parks totaling more than 24,000 acres (97 km2) arranged along the Huron River and Clinton River forming a partial ring around the metro area. Plans are in development to finish the ring by building hike/bike trails to connect all the parks as a green belt. The parks draw about 7.5 million visitors a year, down from a peak of 10 million in 2009. The park system is primarily tax-funded with a $50 million annual budget. The system provides employment for 200 full-time and part-time employees year-round and 1,000 additional summer workers. The rivers are prime fishing and canoeing streams with Delhi Metropark including a short rapids, which while runnable, is the only point other than dams on either stream normally portaged. 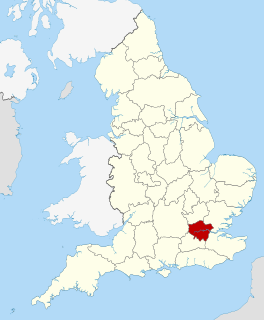 The Metropolitan Police District (MPD) is the police area which is policed by the Metropolitan Police Service in London. It currently consists of the Greater London region, excluding the City of London. The Metropolitan Police District was created by the Metropolitan Police Act 1829 as an ad hoc area of administration because the built-up area of London spread at the time into many parishes and counties without an established boundary. The district expanded as the built up area grew and stretched some distance into rural land. When county police forces were set up in England, those of Essex, Hertfordshire, Kent and Surrey did not cover the parts of the counties within the MPD, while Middlesex did not have a county force. Similarly, boroughs in the MPD that elsewhere would have been entitled to their own police force did not have them.

The Far North is a large region of South Australia close to the Northern Territory border. Colloquial usage of the term in South Australia refers to that part of South Australia north of a line roughly from Ceduna through Port Augusta to Broken Hill. The South Australian Government defines the Far North region similarly with the exception of the Maralinga Tjarutja Lands. the Yalata Aboriginal community and other unincorporated crown lands in the state's far west, which are officially considered part of the Eyre and Western region.

The Philippines has four levels of administrative divisions, the lowest three of which are defined in the Local Government Code of 1991 as local government units (LGUs). They are, from the highest to the lowest:

Greenbelt Alliance is a non-profit land conservation and urban planning organization that has worked in California's nine-county San Francisco Bay Area since 1958.

The Geauga Park District, among the Ohio Metroparks, manages a system of nature preserves scattered throughout Geauga County, Ohio. The network of 22 open parks, as well as preserves and future parks, encompass more than10,000 acres (40 km2) and includes 60+ miles of walking, bicycle and horse trails, picnic areas, a nature center and abundant fishing holes.

City limits or city boundaries refer to the defined boundary or border of a city. The area within the city limit can be called the city proper. Town limit/boundary and village limit/boundary apply to towns and villages. Similarly, corporate limit is a legal name that refers to the boundary of municipal corporations. In some countries, the limit of a municipality may be expanded through annexation. 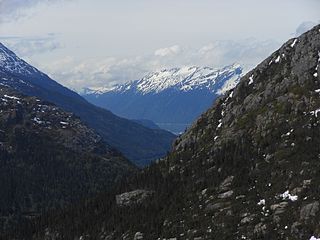 The Stikine Region is an unincorporated area in northwestern British Columbia, Canada. It is the only area in the province that is not part of a regional district. The Stikine Region was left unincorporated following legislation that established the province's regional districts in 1968 and is not classified as a regional district. It contains no municipal governments which normally constitute the majority of seats on the boards of regional districts. There is only one local planning area, the Atlin Community Planning Area, which was combined in 2009 with the Atlin Community Improvement District to provide fire, landfill, water, streetlighting, sidewalks and advisory land use services. All other services not provided privately are administered directly by various provincial government ministries. The area around Dease Lake, formerly in the Stikine Region, is now within the boundaries of the Regional District of Kitimat-Stikine following a boundary amendment in 2008.