The Italian Catholic Diocese of Parma (Latin : Dioecesis Parmensis) has properly been called Diocese of Parma-Fontevivo since 1892. [1] [2] The bishop's seat is in Parma Cathedral. The diocese is a suffragan of the Archdiocese of Modena-Nonantola.

At Easter 967, Bishop Uberto of Parma attended a council at Ravenna, presided over by Pope John XIII and the Emperor Otto I. The Council deposed Archbishop Herold of Salzburg for heresy. The Emperor confirmed the Pope in the possession of all of the territories of the Roman church, including the exarchate of Ravenna. The Pope raised the diocese of Magdeburg to the status of an archbishopric at the Emperor's request. He also confirmed the privileges of the Church of Ferrara. [4]

In 987, Archbishop Honestus (Onesto) of Ravenna summoned a provincial synod, to meet in the village of Marzaglia, in the diocese of Parma. The bishops who attended included Giovanni of Imola, Gerardo of Faenza, Odone of Cesena, Ulberto of Bologna, Sigolfo of Piacenza, and Uberto of Parma. The assembly dealt with complaints made by the Bishop of Bologna against the Bishop of Parma, claiming that Bishop Uberto was holding properties close to Bologna which ought to belong to Bologna, which was a poor diocese and unable to staff all of its churches. Archbishop Onesto was able to effect a reconciliation through the mutual exchange of disputed properties. [5]

In 1410 the plague struck Parma with especial virulence. It is claimed that one-quarter of the population died. [6]

In accordance with a bull of Pope Gregory XIII of 14 September 1578, Archbishop Giambattista Castelli of Rimini began an Apostolic Visitation of the diocese of Parma. His first investigation was of the Cathedral Chapter. His first painful discovery was that four of the priests whose duty it was to celebrate Mass in the Cathedral were not able to recite the prayer, Suscipiat Dominus from the Canon of the Mass for the Archbishop. Then the Archbishop turned to an inspection of the Canons of the Cathedral Chapter. He cited the decree of the Council of Trent de reformatione (chapter 12), approved in the 24th Session, which granted their daily stipend from the capitular treasury only to those who had attended at each of the canonical hours. The Canons replied that their custom, since the great plague of 1348 had produced a scarcity of clergy, required only the attendance at the daily Mass and at the Vespers on the eve of a great feast day. Touching as it did both on local tradition and the Canons' income, the Archbishop's ruling set off a legal firestorm. [7]

The Canons lodged an appeal in Rome with the Prefect of the Sacred Congregation of the Council, Cardinal Marcantonio Maffei, and sent the Archdeacon, Msgr. Cesare Picolello and Canon Francesco Ballestrieri, armed with a testimonial letter of the elders of the Commune of 9 January 1579, stating that the people of Parma were content with the celebration of the canonical hours in the Cathedral. Cardinal Alessandro Sforza was induced to speak with Cardinal Maffei, and the Congregation took up the appeal on 29 January 1579, in the presence of twelve cardinals, nine of whom voted in favor of the Canons of Parma, ruling that the Canons' service was not in violation of the decrees of the Council of Trent. The Pope was informed of the decision, and gave his approval. [8]

In 1580, on the initiative of Duke Ottavio, the Jesuits were introduced into Parma, and given the church of San Benedetto, which had belonged to the abbey of S. Giovanni Evangelista. They continued to use the church until the reign of Pope Clement IX. They also acquired the Oratory of S. Rocco. [9] By 1618, the Jesuits had a college for high school students, and one-third of the twenty-six professors at the University of Parma were Jesuits. [10]

The residence of the Canons of the Chapter of the cathedral of Parma (Canonica) was established on 29 December 877 by Bishop Wibodus and King Carloman. [11]

The cathedral of Parma, which had been constructed with substantial aid from the Countess Matilda of Tuscany, was consecrated by Pope Paschal II on 31 October 1106. [12]

On 3 January 1116 began a series of earthquakes in the neighborhood of Parma, which lasted for thirty days. In 1117 another major earthquake destroyed the Cathedral of Parma. [13]

The baptistry of the Cathedral was dedicated on 25 May 1270 by Bishop Opizzo de Sancto Vitale. [14]

The largest bell of the cathedral, named "Bajonus", was given by Cardinal Gerardo Bianchi in 1291. [15]

On 8 January 1584, the high altar of the Cathedral was consecrated by Bishop Ferrante Farnese. [16]

In 1691, the Cathedral was staffed by a Chapter composed of three dignities (Archdeacon, Archpriest, and Provost) and fourteen Canons. [17] In 1579, the residence of the Canons was at the monastery of S. Giovanni Evangelista in Parma, directly behind the apse of the cathedral. [18]

The Cathedral was awarded the status of a minor basilica by Pope Gregory XVI in a bull of 13 June 1834. [19]

On 24 April 1246, Cadalo, the new Bishop of Parma, and his family, who were established in the diocese of Verona, created and endowed a new monastery, that of S. Giorgio, in Breida, near Verona. [20] Bishop Cadalo held a diocesan synod in 1061. He was in schism with Pope Alexander II, and counted all of Lombardy in his camp except for territories belonging to Countess Matilda of Tuscany. [21] 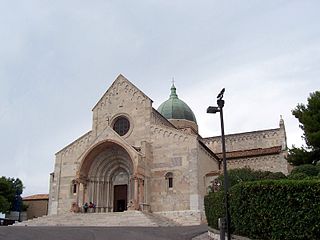 The Archdiocese of Ancona-Osimo is a joint ecclesiastical territory and metropolitan see of the Catholic Church in the Marche region of Italy.

The Archdiocese of Bologna is a metropolitan archbishopric of the Catholic Church in northern Italy. The cathedra is in the cathedral church of San Pietro in Bologna. The current Archbishop is Matteo Zuppi who was installed in 2015.

The Diocese of Saluzzo is a Catholic ecclesiastical territory in the Piedmont region of northwestern Italy, centered in the comune of Saluzzo. The diocese was established on 29 October 1511, and was directly dependent upon the Holy See. It is now a suffragan of the Archdiocese of Turin. 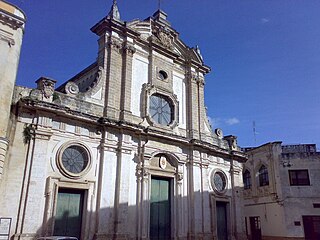 The Diocese of Nardò-Gallipoli is a Roman Catholic ecclesiastical territory in southern Italy. It is a suffragan of the Archdiocese of Lecce.

The Roman Catholic Diocese of Città di Castello is a Latin suffragan bishopric in the ecclesiastical province of the metropolitan Archdiocese of Perugia-Città della Pieve, in the central Italian region of Umbria. 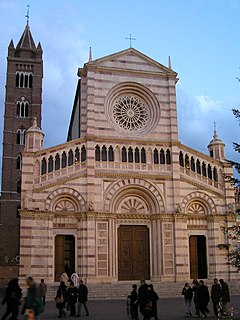 The Diocese of Grosseto is a Roman Catholic ecclesiastical territory in Italy, a suffragan of the archdiocese of Siena-Colle di Val d'Elsa-Montalcino, in Tuscany. Its current bishop is Rodolfo Cetoloni.

The Diocese of Nocera Umbra was a Roman Catholic diocese in Umbria, Italy. 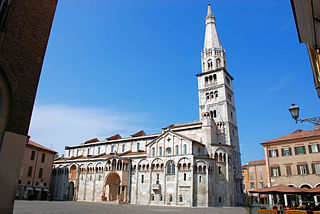 The Archdiocese of Modena-Nonantola is a Roman Catholic ecclesiastical territory in Italy. It existed as the Diocese of Modena in central Italy from the 4th century. Originally it was a suffragan the diocese of Milan, but later became a suffragan of Ravenna. Because of the schism of the Antipope Clement III, Pope Paschal II released Modena from obedience to the church of Ravenna, but Pope Gelasius II restored the previous status. Modena continued as a suffragan of Ravenna until 1582, when the Archdiocese of Bologna was created by Pope Sixtus V in the Bull Universi orbis of 1 December 1582, and was assigned Modena as one of its suffragans.

The Italian Catholic Diocese of Orvieto-Todi, in central Italy, was created in 1986 when the historical Diocese of Orvieto was united to the Diocese of Todi. This diocese is directly subject to the Holy See. The current bishop is Benedetto Tuzia.

The Catholic Diocese of Como in northern Italy, has existed since the fourth century. It is a suffragan of the archdiocese of Milan. The bishops' seat is in Como Cathedral. 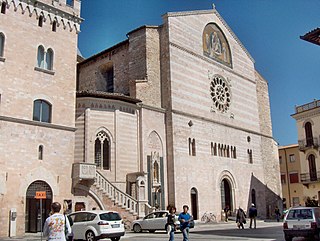 The Italian Catholic Diocese of Foligno is in Umbria. It is a suffragan of the Archdiocese of Perugia-Città della Pieve. 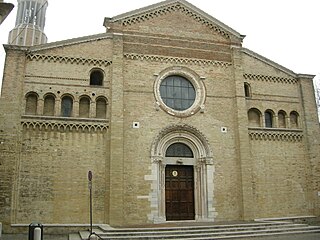 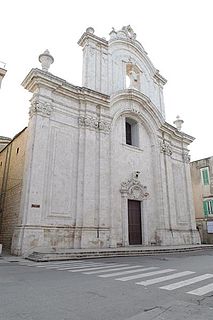 The Italian Catholic Diocese of Ascoli Piceno in the Marche, has existed since the fourth century. Historically immediately dependent on the Holy See, it is now a suffragan of the Archdiocese of Fermo. There is, in 2015, one priest for every 1,074 Catholics.

The Italian Catholic Diocese of San Severo is in Apulia. It is a suffragan of the Archdiocese of Foggia-Bovino.

The Diocese of Ischia is a Roman Catholic ecclesiastical territory in Campania, southern Italy. It is a suffragan of the Archdiocese of Naples. The diocese comprises the entire island of Ischia, which contains seven communes divided into two circumscriptions. In 1743, the population was about 4,000. The city of Ischia constituted one single parish, with two religious houses of men and one of women. In 2018, the population of the town of Ischia was 20,118.