The Royal Green Jackets (RGJ) was an infantry regiment of the British Army, one of two "large regiments" within the Light Division (the other being The Light Infantry).

The Royal Green Jackets was formed on 1 January 1966 by the amalgamation of the three separate regiments of the Green Jackets Brigade: [1]

There were also two Territorial Army battalions made up as follows: [2]

During the 1980s, the battalions were deployed to various parts of Northern Ireland (Operation Banner). The 1st, 2nd and 3rd battalions were also based in West Germany, Osnabrück (1RGJ), Minden (2RGJ) and Celle (3RGJ). [1]

The regiment's greatest loss of life came on 20 July 1982 when seven RGJ bandsmen were killed by a Provisional Irish Republican Army bomb which exploded during a public concert featuring the music from Oliver! to 120 people at the bandstand in Regents Park. [3]

After the 1992 reorganisation, the unit was mostly based overseas in Dhekelia (Cyprus) and Paderborn (Germany), as well as in Northern Ireland. It also saw action in Bosnia and Kosovo during the Yugoslav Wars. Both battalions returned to the United Kingdom by 2002 and in 2003 the 1st Battalion served on Operation Telic 2 in Iraq. [1]

The Royal Green Jackets (Rifles) Museum is based at Peninsula Barracks in Winchester. [6]

Their motto was Celer et Audax (Latin: "Swift and Bold"). As they were used as shock troops and marksmen, they had to get to the front line of battle as fast as was possible; as a result the RGJ marched at 140 paces per minute (at a 30" pace) whereas other regiments march at just 120. [7]

The regiment was classed as a 'rifle' regiment, having its lineage in the regiments of foot that were equipped with the first Baker rifles. Traditionally, rifle regiments wore rifle green tunics, an early form of camouflage, instead of the red jackets worn by line infantry, hence the regimental name. [7]

The cap badge was a Maltese Cross, which was drawn from the badges of the King's Royal Rifle Corps and The Rifle Brigade, with a combination of some of their battle honours on its arms. [7]

The battle honours are: [8]

The 14th (Light) Division was an infantry division of the British Army, one of the Kitchener's Army divisions raised from volunteers by Lord Kitchener during the First World War. All of its infantry regiments were originally of the fast marching rifle or light infantry regiments, hence the title "Light". It fought on the Western Front for the duration of the First World War.
The division was disbanded by March 1919, and was not reformed in the Second World War. 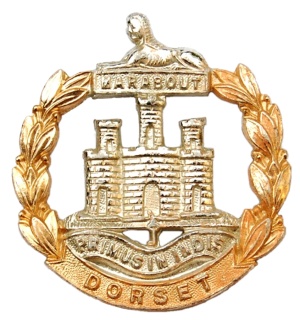 The Dorset Regiment was a line infantry regiment of the British Army in existence from 1881 to 1958, being the county regiment of Dorset. Until 1951, it was formally called the Dorsetshire Regiment, although usually known as "The Dorsets". In 1958, after service in the Second Boer War along with World War I and World War II, the Dorset Regiment was amalgamated with the Devonshire Regiment to form the Devonshire and Dorset Regiment. In 2007, it was amalgamated with the Royal Gloucestershire, Berkshire and Wiltshire Regiment, The Light Infantry and the Royal Green Jackets to form a new large regiment, The Rifles.

The Royal Green Jackets (Rifles) Museum is situated at Peninsula Barracks in Winchester, England. The museum is one of several regimental museums that form part of Winchester's Military Museums. 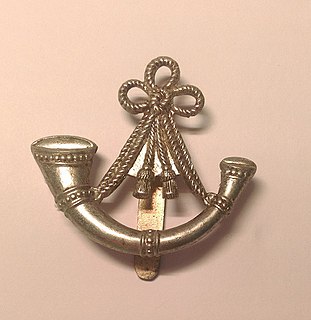 The Oxfordshire and Buckinghamshire Light Infantry was a light infantry regiment of the British Army that existed from 1881 until 1958, serving in the Second Boer War, World War I and World War II.

The 1st Green Jackets was an infantry regiment of the British Army that existed from 1958 to 1966. The regiment served in the Cyprus Emergency, Brunei Revolt, Indonesia-Malaysia confrontation and West Berlin. The regiment formed part of the Green Jackets Brigade and in 1963 was redesignated as a rifle regiment.

The Rifles is an infantry regiment of the British Army. Formed in 2007, it consists of four Regular battalions and three Reserve battalions, plus a number of companies in other Army Reserve battalions. Each battalion of The Rifles was formerly an individual battalion of one of the two large regiments of the Light Division. Since formation the regiment has been involved in combat operations, first in the later stages of the Iraq War and in the War in Afghanistan. 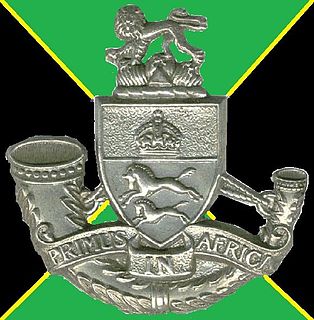 The Durban Light Infantry is a Motorised Infantry regiment of the South African Army. It lost its status as a Mechanised infantry regiment in 2010 in line with the rationalisation of resources. As a reserve unit, it has a status roughly equivalent to that of a British Army Reserve or United States Army National Guard unit. 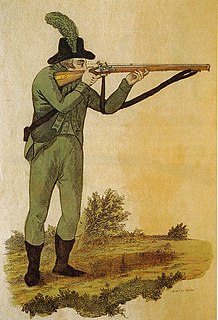 A rifleman is an infantry soldier armed with a rifled long gun. Although the rifleman role had its origin with 16th century hand cannoneers and 17th century musketeers, the term originated in the 18th century with the introduction of the rifled musket. By the mid-19th century, entire regiments of riflemen were formed and became the mainstay of all standard infantry, and rifleman became a generic term for any common infantryman.

The 43rd Infantry Brigade was a brigade of the British Army during the First and Second World Wars, and later, as 43 (Wessex) Brigade, a regional headquarters from 1985 to 2014.

The Green Jackets Brigade was an administrative brigade of the British Army from 1946 to 1968, that administered the English rifle regiments.

The Middlesex Regiment was a line infantry regiment of the British Army in existence from 1881 until 1966. The regiment was formed, as the Duke of Cambridge's Own , in 1881 as part of the Childers Reforms when the 57th and 77th Regiments of Foot were amalgamated with the county's militia and rifle volunteer units. 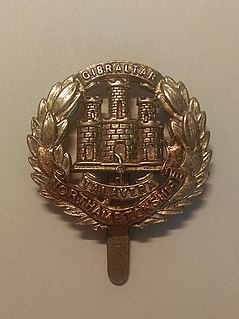 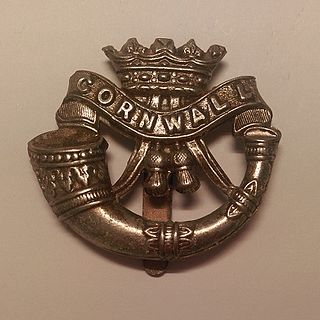 The Duke of Cornwall's Light Infantry (DCLI) was a light infantry regiment of the British Army in existence from 1881 to 1959.

The Imperial-Royal Landwehr, also called the Austrian Landwehr, was the territorial army of the Cisleithanian or Austrian half of the Austro-Hungarian Empire from 1869 to 1918. Its counterpart was the Royal Hungarian Landwehr. The two Landwehrs, together with the Common Army and the Imperial and Royal Navy, made up the armed forces of Austria-Hungary.

The Band and Bugles of the Rifles is a military band serving as the regimental band for The Rifles, the sole rifle regiment and the largest in the British Army. It is the senior most of three bands in the regiment and is the only one that is part of the regular army. Uniquely, it employs bugles at its front, a tradition that goes back to the conflicts of the 18th century. Major Séan O’Neill is currently serving as the Director of Music (DOM) of the band and bugles. It is part of the Royal Corps of Army Music.