He attended the Latin school in Stollberg, but his wish to study at the university was made impossible by lack of financial means, [2] and he therefore became a saddler like his father.

He worked as a saddler and coach-builder in different German cities, moved from Dresden to Basel and Paris, and then, 23 years old, settled in London. He established himself in Long Acre, the centre of coach-making in London and close to the market at Covent Garden. His extraordinary business instinct, as well as his flair for design and talent for self-promotion, won him the £200 contract to design the ceremonial coach for the Lord Chancellor of Ireland, John FitzGibbon, 1st Earl of Clare. After this he designed The Royal Sailor, an 8-wheel omnibus that ran between Charing Cross, Greenwich and Woolwich. [3]

Ackermann then moved to Little Russell Street where he published Imitations of Drawings of Fashionable Carriages (1791) to promote his coach-making. Other publications followed. An able artist in his own right, [4] in 1795 he established a print-shop and drawing-school at 96 Strand. [5] Ackermann set up a lithographic press and began a trade in prints. [1] He later began to manufacture colours and thick carton paper for landscape and miniature painters. Within three years the premises had become too small and he moved to 101 Strand, in his own words "four doors nearer to Somerset House", the seat of the Royal Academy of Arts. [3]

In 1809 he applied his press to the illustration of Repository of Arts, Literature, Fashions , which appeared monthly until 1829, by when forty volumes had appeared. The Repository documented the changing classicising fashions in dress and furniture of the Regency; Thomas Rowlandson and other distinguished artists were regular contributors. William Combe and Rowlandson's parody, Dr Syntax in search of the Picturesque first appeared in parts in Ackermann's Poetical Magazine and was then reissued as a bestselling separate book. Ackermann also published Rowlandson's masterpiece The English Dance of Death (2 volumes 1816). He introduced from Germany [7] the fashion of the once popular Literary Annuals, beginning in 1823 with Forget-Me-Not ; and he published many illustrated volumes of topography and travel, including The Microcosm of London (3 volumes, 1808–1811), Westminster Abbey (2 volumes, 1812), [8] The Rhine (1820), [9] The Seine (1821), [10] and The World in Miniature (43 volumes, 1821–1826). [1]

An inventor and innovator, he was important as a carriage designer and patented the Ackermann steering geometry. [11] In 1801 he patented a method for rendering paper and cloth waterproof and erected a factory in Chelsea to make it. [12] He was one of the first to illuminate his own premises with gas. [13] Indeed, the introduction of lighting by gas owed much to him. [1]

During the Napoleonic wars, Ackermann was an energetic supporter of the Allied cause and made significant contributions to British propaganda through his publication of anti-Napoleonic prints and military manuals. He became a naturalised British citizen in March 1809. [14] After the Battle of Leipzig, Ackermann collected nearly a quarter of a million pounds sterling for the German relief effort. [1]

As one of the pioneers of modern publishing methods, Ackermann developed an international distribution network for his publications and came to have significant commercial interests in South America. [15] The business he founded in London flourished throughout the 19th century under the management of his descendants. [16] He was buried at St. Clement Danes in The Strand, London.

Thomas Rowlandson was an English artist and caricaturist of the Georgian Era, noted for his political satire and social observation. A prolific artist and printmaker, Rowlandson produced both individual social and political satires, as well as large number of illustrations for novels, humorous books, and topographical works. Like other caricaturists of his age such as James Gillray, his caricatures are often robust or bawdy. Rowlandson also produced highly explicit erotica for a private clientele; this was never published publicly at the time and is now only found in a small number of collections. His caricatures included those of people in power such as the Duchess of Devonshire, William Pitt the Younger and Napoleon Bonaparte. 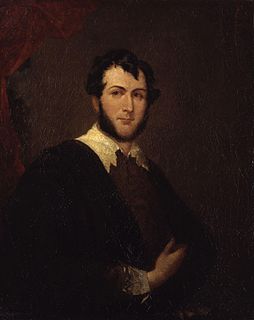 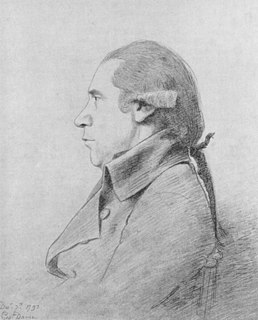 Augustus Charles Pugin, born Auguste-Charles Pugin, (1762–1832) was an Anglo-French artist, architectural draughtsman, and writer on medieval architecture. He was born in Paris, then the Kingdom of France, but his father was Swiss, and Pugin himself was to spend most of his life in England.

The Great Synagogue of London was, for centuries, the centre of Ashkenazi synagogue and Jewish life in London. Built north of Aldgate in the 17th century, it was destroyed during World War II, in the Blitz. 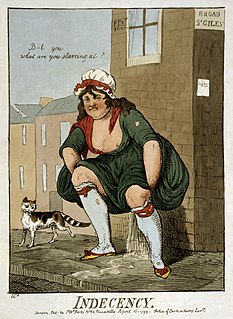 Lieutenant-Colonel James Burton was the most successful and imperative property developer of Regency and Georgian London. By the time of his death in 1837, Burton had built over 3000 properties, and his buildings covered over 250 acres of central London. His imperative contribution to the development of the West End has been acknowledged by James Manwaring Baines, John Summerson, and Dana Arnold. Steen Eiler Rasmussen, in London: The Unique City, commended Burton's buildings, but did not identify their architect. The 21st century Oxford Dictionary of National Biography contends that Burton was 'the most successful developer in late Georgian London, responsible for some of its most characteristic architecture'.

George Daniel (1789–1864) was an English author of miscellaneous works and book collector.

William Henry Pyne was an English writer, illustrator and painter, who also wrote under the name of Ephraim Hardcastle. He trained at the drawing academy of Henry Pars in London. He first exhibited at the Royal Academy in 1790. He specialized in picturesque settings including groups of people rendered in pen, ink and watercolour. Pyne was one of the founders of the Royal Watercolour Society in 1804. 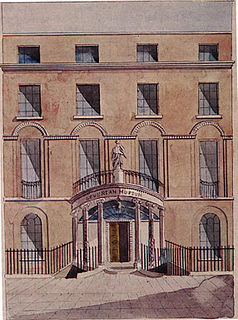 The Blackfriars Rotunda was a building in Southwark, near the southern end of Blackfriars Bridge across the River Thames in London, that existed from 1787 to 1958 in various forms. It initially housed the collection of the Leverian Museum after it had been disposed of by lottery. For a period it was home to the Surrey Institution. In the early 1830s it notoriously was the centre for the activities of the Rotunda radicals. Its subsequent existence was long but less remarkable. 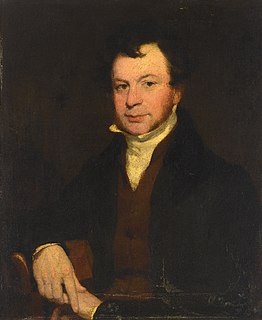 John Gendall was a British painter known particularly for his landscapes of Devon. Gendall was involved in the early use of lithography in London. He was born and died in Exeter, where he assisted with the creation of the museum and the university.

Jesse Gibson was a British architect.

Edward Gyfford or Gifford was a British architect and surveyor known for his two volumes of designs for small buildings that were published in 1806 and 1807. He also produced architectural drawings that were engraved for David Hughson's description of London (1805–1809).