Hirayama got the nickname "Fibber" from his father's inability to pronounce "February", the month of his birth. [4] He was originally from Exeter, California. [7] At 12 years old, he was interned at the Poston War Relocation Center with his father and two brothers. [4] [8] After three years, when World War II ended, he was released and began attending Exeter Union High School from which he graduated in 1947. [9]

Hirayama was a star athlete at Fresno State, playing both baseball and football as a halfback. Hirayama attended the school on a football scholarship and only played baseball because he did not want to play spring football. He wound up playing three seasons of each. [1] On the baseball field, he set a college baseball record with five stolen bases in a single game and had a .420 batting average in 1950. [10] He was voted "Nisei Player of the Year" in 1951. [4] In 1952, he led Fresno State to its first ever NCAA postseason appearance. [8] Hirayama set single-season and career school records in stolen bases which would not be surpassed until 1987 by Tom Goodwin. [11]

On April 30, 2017, he became the eleventh player to have his number retired by Fresno State's baseball program. [11]

After college, Hirayama signed a professional contract with the St. Louis Browns and spent the 1952 season with the Stockton Ports. He was one of the first Japanese-American players to sign with a Major League Baseball club. [10]

In 1953, Hirayama was drafted into the military. From 1953 to 1955, he continued playing baseball as a soldier at Fort Ord. [12] After being discharged, Hirayama signed with the Hiroshima Carp of Nippon Professional Baseball on the insistence of fellow Japanese-American Kenichi Zenimura. In 1954, the Browns granted Hirayama his release and he and his wife moved to Japan. Hirayama did not speak Japanese upon arrival but became fluent after a few years. [1] Toward the end of his playing career, Hirayama was serving as a player-coach. His playing career was cut short when he ran into a wall and suffered a nerve injury which caused him to lose some vision in his right eye. [13]

After retiring as a player, Hirayama spent three years coaching and one year managing in the Japanese minor leagues before returning to the United States. [13] Hirayama returned to California where he worked as a scout for the California Angels and Hiroshima Carp. As a scout, he helped the Carp sign Tim Ireland. [10]

In 2009, Hirayama won the Al Radka Award. [14] At the time, he was the head of the Japanese Baseball Development Program in the Dominican Republic. [14]

Hirayama met his wife, Jean, while they were attending Fresno State. They were married in February 1955 and had three sons, Colin, Kevin and Brian. [15] After returning to the United States, Hirayama also worked as a teacher and administrator in the Clovis Unified School District in addition to his scouting duties. [10] [15] He retired from the school district in 1991 and his wife died that same year. [15]

In the 2+1⁄2 years before his former Fresno State teammate Tex Clevenger died of Alzheimer's disease in August 2019, Hirayama (then 89 years old himself) would drive from Fresno to Visalia, California every week to visit Clevenger, although Clevenger eventually stopped recognizing him and lost the ability to speak. [16] 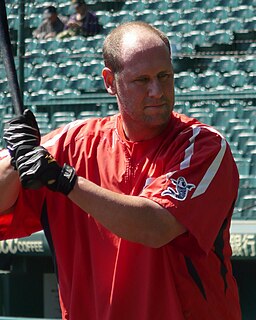 Scott Michael McClain is a former Major League Baseball third baseman who is a scout in Nippon Professional Baseball.

Sachio Kinugasa was a Japanese professional baseball third baseman for the Hiroshima Toyo Carp of the Nippon Professional Baseball league from 1965 to 1987. He was nicknamed Tetsujin, meaning "Iron Man". He played in a record-breaking 2,215 consecutive games, having surpassed Lou Gehrig's record by 1987. 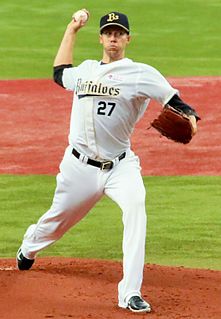 The Nisei Baseball Research Project (NBRP) is a non-profit 501(c)(3) organization documenting, preserving and exhibiting history of Japanese American baseball. It was founded by Kerry Yo Nakagawa, the author of Through a Diamond: 100 Years of Japanese American Baseball. The NBRP's mission is to bring awareness and education about Japanese American Concentration Camps during World War II, through the prism of their multimedia projects and baseball. Also to recognize the many prewar Issei and Nisei ballplayers that never got an opportunity to play in Major League Baseball because of the 'color line' and their contribution as our American Baseball Ambassadors in the early 1920s and 1930s in Japan, Korea and Manchuko, China. These ballplayers also kept the All-American Pastime alive during their incarceration during World War II as they played 'behind barbed wire' and again were denied of professional MLB careers. 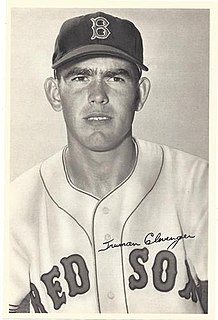 Truman Eugene "Tex" Clevenger was an American Major League Baseball relief pitcher and spot starter who played for the Boston Red Sox, Washington Senators, Los Angeles Angels and New York Yankees from 1954 to 1962. He was 6 ft 1 in (1.85 m) tall and 180 pounds (82 kg), and threw and batted right-handed. He attended Fresno State University.

Erik Paul Schullstrom is a former professional baseball pitcher who played for the Minnesota Twins in its 1994 and 1995 seasons. Listed at 6 ft 5 in (1.96 m), 220 pounds, Schullstrom threw and batted right-handed. He was born in San Diego, California and attended Alameda High School where he was voted Oakland Tribune Northern California Pitcher of the year in 1987. He later attended Fresno State University where he was a Freshman All-American in 1988 after going 14-2 with 11 complete games. The Bulldogs were at one point ranked #1 in the nation after winning 32 consecutive games, and eventually finished 7th in the 1988 College World Series. He also was a member of Team USA in 1989. 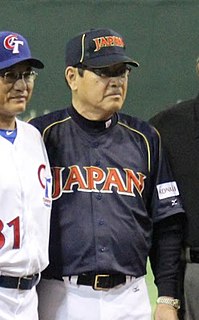 Kōji Yamamoto is a former Japanese baseball player and manager of the Hiroshima Toyo Carp of Japan's Central League. A four-time home run king having played for Hiroshima Carp throughout his career, Yamamoto contributed to the team winning five league championships including its first-ever in 1975, and three titles of Japan Series in 1979, 1980 and 1984. He recorded over 40 home runs for five years in a row from 1977. With 536 home runs, he is fourth on the NPB career list. He is known as the Mr. Red Helmet, nicknamed after Hiroshima Carp's symbolic red colored helmet.

Marty Leo Brown is the former manager of the Buffalo Bisons and a former Major League Baseball third baseman who played for the Cincinnati Reds (1988–89) and Baltimore Orioles (1990). He is also the former manager of the Hiroshima Toyo Carp of Japan's Central League, where he played for three seasons from 1992 to 1994, and the Tohoku Rakuten Golden Eagles of the Pacific League.

Hiroki Kuroda is a Japanese former professional baseball pitcher. He pitched in Nippon Professional Baseball (NPB) for Hiroshima Toyo Carp from 1997 to 2007 before playing in Major League Baseball (MLB) for the Los Angeles Dodgers from 2008 to 2011 and New York Yankees from 2012 to 2014. After the 2014 season, he chose to return to the Carp to finish out his career.

Kenichi Zenimura was a Japanese-American baseball player, manager, and promoter. He had a long career with semiprofessional Japanese-American baseball leagues in the western United States and Hawaii; these leagues were very active and popular from about 1900 to 1941. He is also noted for the successful barnstorming tours he organized that brought famed players such as Babe Ruth and Lou Gehrig to the west coast and to Japan for exhibition games in the 1920s and 1930s. Along with most Japanese-Americans living on the west coast of the United States, during World War II he was incarcerated with his family in an internment camp. Their camp was the Gila River War Relocation Center in Arizona. There he led construction of a complete baseball field including spectator stands, and he organized baseball leagues for the internees. These leagues were important both to the morale of the internees and to building relationships with nearby Arizona residents. Zenimura has been called the "Father of Japanese American Baseball". 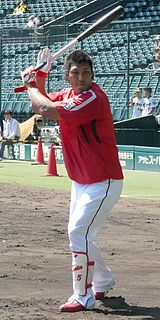 Kenta Kurihara is a batting coach for the Chunichi Dragons. 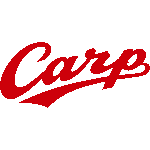 The Hiroshima Toyo Carp are a professional baseball team based in Hiroshima, Japan. They compete in the Central League of Nippon Professional Baseball. The team is primarily owned by the Matsuda family, led by Hajime Matsuda, who is a descendant of Mazda founder Jujiro Matsuda. Mazda is the largest single shareholder (34.2%), which is less than the portion owned by the Matsuda family. Because of that, Mazda is not considered the owner firm. However, the company connection is highlighted in the club name; until 1984, Mazda's official name was Toyo Kogyo Co., Ltd..

Randy "Jay" Jackson is an American professional baseball pitcher for the San Francisco Giants of Major League Baseball (MLB). Jackson played college baseball at Furman University. He was drafted by the Chicago Cubs in the ninth round of the 2008 Major League Baseball draft. He made his MLB debut in 2015. He previously played in MLB for the San Diego Padres and Milwaukee Brewers, and in Nippon Professional Baseball for the Hiroshima Toyo Carp and Chiba Lotte Marines.

Daniel Stuart Johnson is an American professional baseball pitcher for the Tampa Bay Rays of Major League Baseball (MLB). He has previously played for the Colorado Rockies and Cleveland Indians of MLB and for the Hiroshima Toyo Carp and Tohoku Rakuten Golden Eagles of Nippon Professional Baseball (NPB). 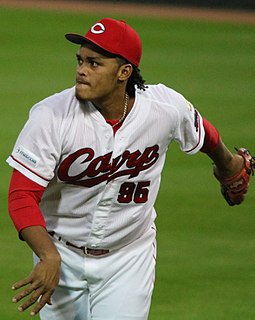 Xavier Alexander Batista is an Dominican professional baseball outfielder for the Bravos de León of the Mexican League. He has played in Nippon Professional Baseball (NPB) for the Hiroshima Toyo Carp.

Masato Morishita is a professional Japanese baseball player. He plays pitcher for the Hiroshima Toyo Carp.