A sloboda (Russian :слобода́,IPA:  [sləbɐˈda] ) was a kind of settlement in the history of the Old Russian regions Povolzhye, Central Russia, Belarus and Ukraine. The name is derived from the early Slavic word for "freedom" and may be loosely translated as "(tax-)free settlement". [1] In modern Russia, the term is used to denote a type of a rural locality in Kursk, Lipetsk, Nizhny Novgorod, Oryol, Rostov, Ryazan, Tula, and Voronezh Oblasts.

Often a sloboda was a colonization-type settlement in sparsely populated lands, particularly by Cossacks in Cossack Hetmanate, see "Sloboda Ukraine". Initially, the settlers of such sloboda were freed from various taxes and levies for various reasons, hence the name. Freedom from taxes was an incentive for colonization. [2]

By the first half of the 18th century, this privilege was abolished, and slobodas became ordinary villages, shtetls , townlets, suburbs.

Some slobodas were suburban settlements, right behind the city wall. [1] Many of them were subsequently incorporated into cities, and the corresponding toponyms indicate their origin, such as Ogorodnaya Sloboda Lane, Moscow (ru:Переулок Огородная Слобода).

The Brockhaus and Efron Encyclopedic Dictionary writes that by the end of the 19th century a sloboda was a large village with more than one church, a marketplace, and volost administration, or a village-type settlement of industrial character, where the peasants have little involvement in agriculture. [1]

Similar settlements existed in Wallachia and Moldavia, called slobozie or slobozia. The latter term is also the name of the capital city of Ialomiţa County in modern Romania, located in the historical region of Wallachia.

Pomors or Pomory are an ethnographic group descended from Russian settlers, primarily from Veliky Novgorod, living on the White Sea coasts and the territory whose southern border lies on a watershed which separates the White Sea river basin from the basins of rivers that flow south.

Sloboda (Slobidska) Ukraine, or Slobozhanshchina, is a historical region, now located in Northeastern Ukraine and Southwestern Russia. It developed and flourished in the 17th and 18th centuries on the southwestern frontier of the Tsardom of Russia. In 1765 it was converted into the Sloboda Ukraine Governorate. 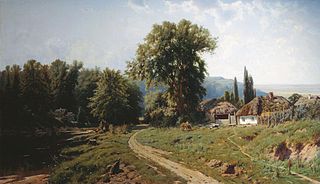 A khutor or khutir is a type of rural locality in some countries of Eastern Europe; in the past the term mostly referred to a single-homestead settlement. The term can be translated as "hamlet".

Nalewka, plural nalewki, is a traditional alcohol from Poland. Similar to medicinal tinctures, it is usually 40% to 45% alcohol by volume, though some can be as strong as 75%. Nalewka is created by macerating and / or infusing various ingredients in alcohol, usually vodka or neutral spirits. Among the ingredients often used are fruits, herbs, spices, roots, sugar and honey. The name nalewka is currently being registered for national appellation within the European Union. Unlike ordinary liqueurs, nalewkas are usually aged. Since nalewka is produced by infusion rather than distillation, the liquid is typically colorful and somewhat opaque. Taste-wise, nalewka is similar to fruit liqueurs such as schnapps or eau-de-vie, but is usually sweeter and typically lacks a strong alcohol taste. 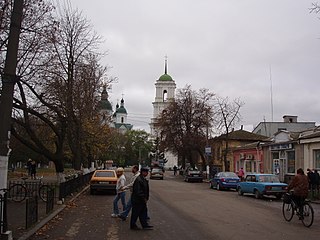 Kozelets is an urban-type settlement in Chernihiv Oblast (province) of northern Ukraine. It is the administrative center of Kozelets Raion. Kozelets is located on the Oster River, a tributary of the Dnieper. Population: 7,758 (2020 est.)

Tekhnikum is a type of vocational school in the Russian Empire, the Soviet Union, as well as in modern Russia, Ukraine and some other post-Soviet states. 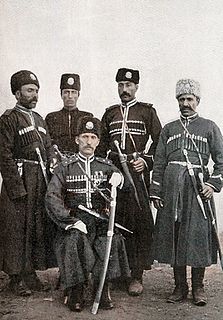 The Qarapapaqs or Karapapaks are a Turkoman sub-ethnic group of Azerbaijanis who mainly live in Azerbaijan, Iran, Georgia, and in the northeast of Turkey near the border with Georgia and Armenia, primarily in the provinces of Ardahan, Kars and Ağri. The exact number for the Qarapapaq population worldwide is unknown but is likely to be in the hundred thousands.

Raznochintsy was an official term introduced in the Digest of Laws of the Russian Empire in the 17th century to define a social estate that included the lower court and governmental ranks, children of personal dvoryans, and discharged military. The category of raznochintsy grew significantly during the massive trimming down of the category of service class people in the second half of the 17th century. Raznochintsy were of taxable estate, meaning those who had to pay poll tax. In the mid-18th century the category was abolished and a significant part of raznochintsy were transferred into peasantry, but many became merchants and various urban categories. As a result, raznochintsy of the 17th and 18th centuries significantly contributed to the urban growth in Siberia. 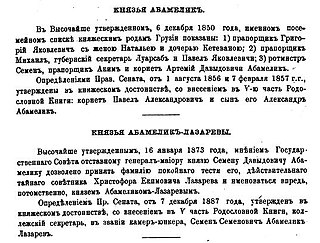 Abamelik was a noble family of Armenian origin in the Kingdom of Georgia, and then in the Russian Empire. 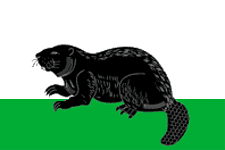 Bobrov is a town and the administrative center of Bobrovsky District in central Voronezh Oblast, Russia, located on the right bank of the Bityug River, 148 kilometers (92 mi) southeast of Voronezh, the administrative center of the oblast. Population: 19,738 ; 20,806 (2002 Census); 21,258 (1989 Census). It was previously known as Bobrovskaya Sloboda.

A miasteczko was a historical type of urban settlement similar to a market town in the former Polish-Lithuanian Commonwealth. After the partitions of Poland at the end of the 18th-century, these settlements became widespread in the Austrian, German and Russian Empires. The vast majority of miasteczkos had significant or even predominant Jewish populations; these are known in English under the Yiddish term shtetl. Miasteczkos had a special administrative status other than that of town or city.

Telega is a type of four-wheel horse-drawn vehicle, whose primary purpose is to carry loads, similar to a wain, known in Russia and other countries. It has been defined as "a special type commonly used in the southern and south-western provinces for the carriage of grain, hay and other agricultural products".

Verba is a village in Dubno Raion, Rivne Oblast, Ukraine. In 2001, the community had 2,863 residents.

Tselovalnik, was a common term for various officials in Muscovy elected by zemshchina in uyezds and posads in various judicial, financial and police functions. The term is a contraction of the expression krestny tselovalnik, "the one who kissed the cross", in reference to the sworn oath accompanied with the kissing of the Holy Cross.

Zemshchina was in the classical sense, according to the definition of the archaeographer Vasily Storozhev, "land, as a concept opposite to the state, to everything state and sovereign in ancient Russia".