Last updated April 12, 2021
This article is about the school in Utah. For the University of Durham college, see John Snow College.

Snow College is a public community college in Ephraim, Utah. It offers certificates and associate degrees in a number of areas, along with bachelor's degrees in music and software engineering and a four-year nursing program. Snow College is part of the Utah System of Higher Education.

Founded in 1888 by local citizens as Sanpete Stake Academy, the school was later renamed Snow Academy to honor Lorenzo Snow and Erastus Snow, distant cousins who were leaders in The Church of Jesus Christ of Latter-day Saints (LDS Church). The initial school was built entirely with local donations, including “Sunday Eggs” (the proceeds from the sales of all eggs laid on Sunday). [2] It is one of the oldest junior colleges west of the Mississippi. In 1917, the academy era ended and the school became Snow Normal College. In 1922, officials renamed the school Snow Junior College only to change it one year later to Snow College. [3] The college was transferred from the LDS Church to the State of Utah in 1931. [4]

The Horne School of Music has been an accredited member of the National Association of Schools of Music since 1997 and is also an All Steinway School. [7] Snow hosts a number of music camps held annually. [8] In 2012, the Horne School of Music began offering the first baccalaureate program in the history of the college, a Bachelor of Music degree in Commercial Music.

The theatre arts program at Snow College is accredited by the National Association of Schools of Theatre and is affiliated with the Juilliard Drama Division. It regularly produces five major productions each year as well as a student produced season of Black Box productions and a summer program featuring instructors from the Juilliard Drama Division.

Snow College athletic teams, known as the Badgers, are consistently highly ranked; its football team went undefeated and won the National Junior College Championship in 1985, with the team inducted into the NJCAA Hall of Fame in 2010, [9] and finished #2 in 2006. Along with football, Snow College participates in women's volleyball, men's and women's soccer, men's and women's basketball, softball, and rodeo. 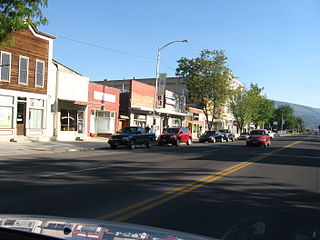 Merlin Jay Olsen was an American football player, announcer, and actor. He played his entire 15-year professional football career in National Football League (NFL) as a defensive tackle with the Los Angeles Rams. He was selected to the Pro Bowl a record 14 straight times, missing selection only in the last year of his career. This record of 14 seasons being selected to play in the Pro Bowl, consecutive or otherwise, is shared with current Tampa Bay Buccaneers quarterback Tom Brady, former offensive lineman Bruce Matthews, former tight end Tony Gonzalez, and former quarterback Peyton Manning. A recipient of the 1961 Outland Trophy as the best lineman in college football, Olsen is a member of the Pro Football Hall of Fame and the College Football Hall of Fame. As an actor, he portrayed farmer Jonathan Garvey on Little House on the Prairie. After leaving that series, he starred in his own NBC drama, Father Murphy.

Dixie State University is a public university in St. George, Utah, in the state's Dixie region. The university offers 4 master's degrees, 45 bachelor's degrees, 11 associate degrees, 44 minors, and 23 certificates/endorsements. In the fall of 2019, there were 11,193 students enrolled at DSU and the university had an 80% acceptance rate. The student body was 56% female and 44% male and DSU was among the top three institutions for diversity in the state of Utah with 23% of the student body being minority students.

Taitusi "Deuce" Lutui is a Tongan-born former American football player who was a guard in the National Football League (NFL) for seven seasons. He played college football for the University of Southern California (USC), and received consensus All-American honors. He was selected by the Arizona Cardinals in the second round of the 2006 NFL Draft, and also played for the NFL's Tennessee Titans. One of several Tongans who have played in the NFL, he is a cousin of Vai Sikahema, the first Tongan ever to play in the NFL.

The Hawai'i Rainbow Warriors football team represents the University of Hawaii at Manoa in NCAA Division I FBS college football. It was part of the Western Athletic Conference until July 2012, when the team joined the Mountain West Conference.

Byron Daniel Chamberlain is a former American football tight end in the National Football League. He played professionally for the Denver Broncos, Minnesota Vikings, and the Washington Redskins. Chamberlain won back-to-back Super Bowl Championships as a member of the Denver Broncos. He was voted to the 2002 Pro Bowl while with the Vikings.

Luther John Elliss is a former American college and professional football player who was a defensive tackle in the National Football League (NFL) for ten seasons. He played college football for the University of Utah, and was recognized as an All-American. Drafted in the first round of the 1995 NFL Draft, Elliss played professionally for the Detroit Lions and Denver Broncos of the NFL. He was a two-time Pro Bowler.

Dillard High School is a historic public middle and high school located in Fort Lauderdale, Florida. The school was established in 1907 and named for black-education advocate James H. Dillard, and it is a part of Broward County Public Schools.

Phillip Vernor Olsen is a former center and defensive tackle in the National Football League for the Los Angeles Rams and Denver Broncos. He was also a member of the Buffalo Bills. He is the younger brother of Pro Football Hall of Famer Merlin Olsen. 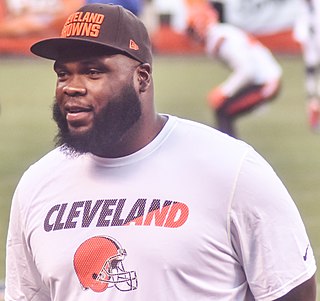 Phillip Eugene Taylor Sr. is a former American football nose tackle. He was drafted in the first round of the 2011 NFL Draft by the Cleveland Browns. He played college football at Penn State and Baylor.

Starlite Lotulelei Jr. is a Tongan professional American football defensive tackle for the Buffalo Bills of the National Football League (NFL). He was drafted by the Carolina Panthers in the first round of the 2013 NFL Draft. He played college football at University of Utah, and shared the Morris Trophy for the best lineman in the Pac-12 Conference.

Su'a Kristopher Cravens is a former American football strong safety. He played college football at USC, and was drafted by the Washington Redskins in the second round of the 2016 NFL Draft. 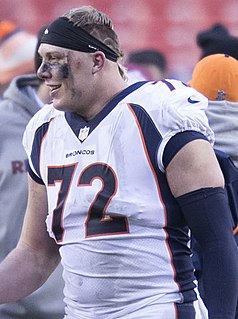 Garett Bolles is an American football offensive tackle for the Denver Broncos of the National Football League (NFL). He played college football at the University of Utah, and was drafted by the Broncos in the first round of the 2017 NFL Draft.

McTelvin Agim is an American football nose tackle for the Denver Broncos of the National Football League (NFL). He played college football at Arkansas.